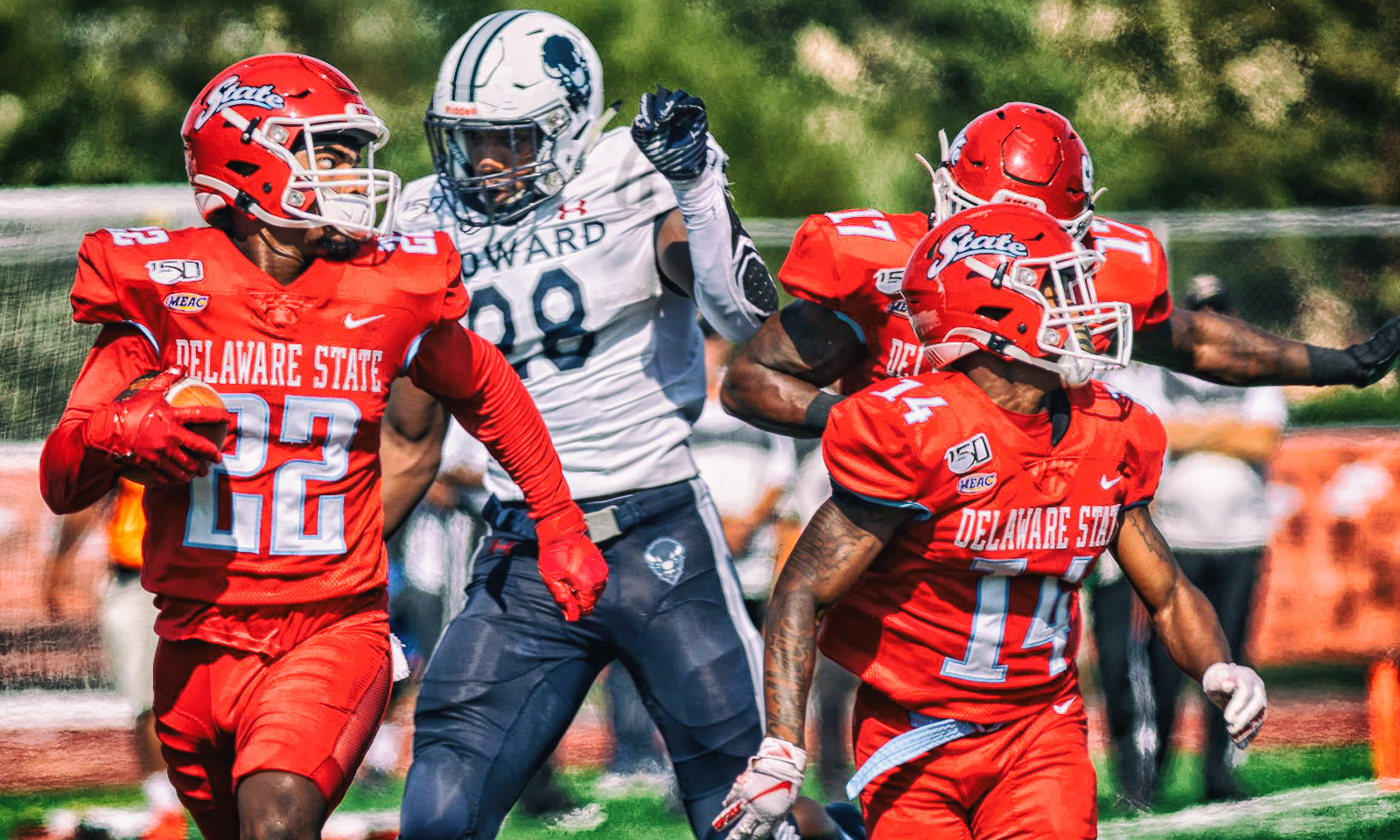 The Hornets will play seven games at Alumni Stadium this fall, including three of their five MEAC contests.

DOVER, Del., June 2, 2021 — Delaware State is scheduled to play a school record-tying number of home games, including six of the first eight contests, during its 2021 football season.

The Hornets will play seven games at Alumni Stadium this fall, including three of their five Mid-Eastern Athletic Conference (MEAC) contests. The number of home games this coming season matches the modern-day school record set during the 2019 campaign.

In addition to the three MEAC contests, Delaware State’s 2021 home schedule includes the renewal of an old rivalry and a first-time FCS opponent.

Delaware State on the road ahead

The Hornets are also home the following Saturday (Sept. 11) to face first-time opponent Georgetown of the FCS Patriot League. The Hoyas were 5-6 overall and 1-5 in the Patriot League in their last season of competition in 2019.

Delaware State hits the road for the first time with a visit to East Tennessee State, also a new opponent, on Sept. 18. The Buccaneers, members of the FCS Southern Conference, postponed their 2020 season to the 2021 spring, posting a 4-2 overall record, including a 2-1 mark in the conference. ETSU was 3-9 and 1-7 in 2019.

The Hornets return home on Sept. 25 to face Merrimack College in the second meeting between the teams. The Warriors won the first contest 30-21, also at Alumni Stadium, in 2019. Delaware State led on three occasions in the contest before Merrimack scored the last 16 points to earn the win.

back on the road

Delaware State returns to the road the following Saturday (Oct. 2) to take on another first-time opponent, Wagner College of the FCS Northeast Conference. The Seahawks played two of four scheduled games in the spring (0-2) and posted a 1-11 mark during the 2019 season.

The Hornets will play their next three 2021 games at home, beginning with an Oct. 9 contest against Virginia University of Lynchburg. This will be the second meeting between the teams. Delaware State won the first meeting 41-7 at Alumni Stadium in 2018. Virginia Lynchburg did not compete in 2020 or this spring, and was 0-9 in 2019.

After an open week, Delaware State begins MEAC play at home against South Carolina State on Oct. 23 in the annual homecoming contest. The Bulldogs have won the last four meetings, including two this spring, and hold a 32-17 lead in the all-time series.

The Hornets will wrap up the three-game home stand with a meeting against Howard on Oct. 30. Delaware State swept two games against the Bison in the spring, winning 17-10 at home and 37-28 in Washington, D.C.

Delaware State plays two of its last three 2021 games on the road, beginning with a trip to Baltimore to face Morgan State on Nov. 6. The Hornets have lost two straight and six of their last seven games against the Bears. This will be the third consecutive meeting between the teams at MSU’s Hughes Stadium.

The Hornets will wrap up their 2021 home schedule with a Nov. 13 contest against Norfolk State. The Spartans have won the last three meetings, although the Hornets hold a 16-9 lead in the series. Delaware State fell to NSU 33-14 the last time the teams met In 2019 at Alumni Stadium.

“We’re excited about the opportunity to play so many games at home this coming season,” Delaware State head coach Rod Milstead said. “I’ve heard from so many of our fans who are looking forward to attending the games in-person again this fall after being unable to come out during the pandemic. While many watched our spring games on television or online, there’s nothing like being at the stadium and taking in all of the excitement that college football game day has to offer.”

Milstead added, “Good teams take care of home first and we’ll have plenty of opportunities to defend the home turf this season.”

Delaware State has a wide selection of ticket options for the upcoming football season. For more information, contact the Delaware State ticket office at (302) 857-7497 or log onto dsuhornets.universitytickets.com.