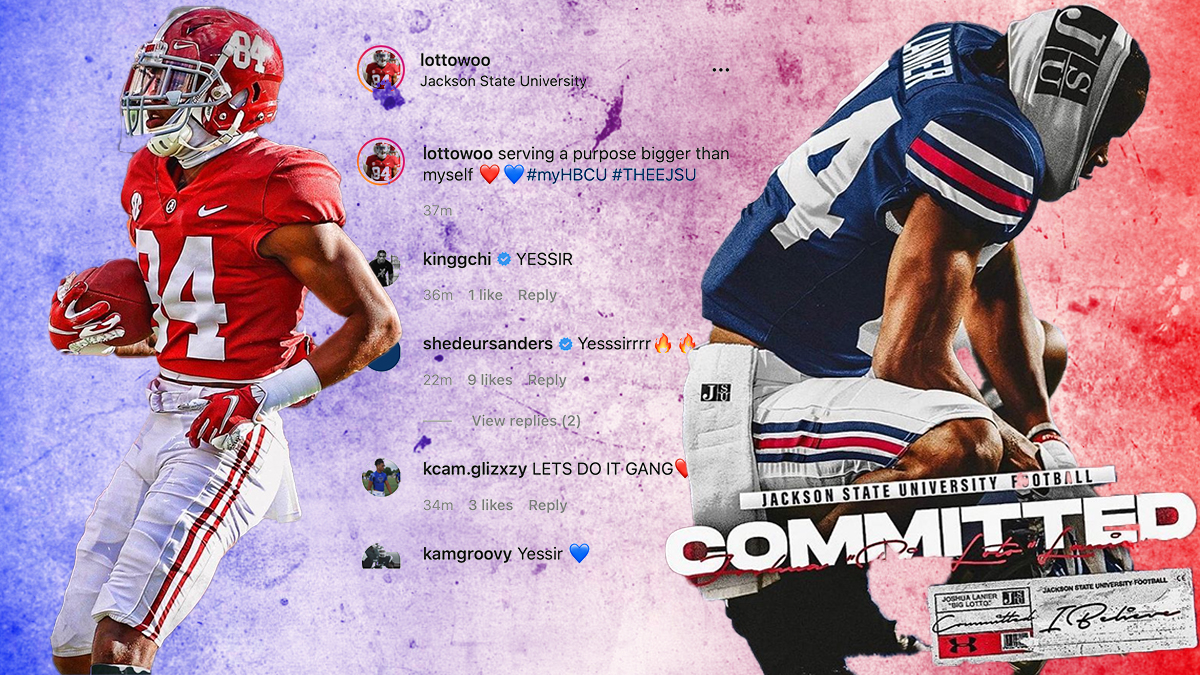 Former Alabama wide receiver Joshua Lanier has made his decision. He’ll be joining Jackson State and as a target for Sheduer Sanders.

Deion Sanders and Jackson State just secured the services of a former Alabama walk-on via the transfer portal.

Former Alabama wide receiver Joshua Lanier has committed to play for Jackson State. He made the announcement on Wednesday via Instagram.

Lanier played one season at Alabama after transferring from North Alabama. He started his career at UNA as a cornerback, but switched to wide receiver. He saw action in seven games as a redshirt senior in 2020, playing primarily on special teams.

The 5’11, Tuscaloosa, AL native did have two catches during Alabama’s spring game. He recently posted a video of him more than holding up his own against many of his talented teammates in practice that attracted a lot of attention.

Utah, Louisiana Tech, Louisiana-Monroe, James Madison were all in the mix for his services.

Lanier’s commitment comes just one day after JSU lost its leading receiver, Daylen Baldwin, to the transfer portal. In just over 24 hours since he announced his entry into the transfer portal, he has reported four offers. Two of them from the SWAC — Alabama State and Prairie View — one from another FCS school (Gardner-Webb) along with one from FBS Central Michigan. Baldwin caught 27 passes for 540 yards and seven scores in the spring.

Lanier is the latest former FBS wideout to join the Jackson State program since Deion Sanders took over the program. Former Louisville receiver Cory Reed Jr. caught 27 passes during the spring for JSU, tying Baldwin in the receptions category. Former Houston wide receiver Keith Corbin is there as well as Shane Hooks, a former Colorado receiver.

Sheduer Sanders, Jackson State’s projected starting quarterback, was one of the first to comment on Lanier’s instagram post. It’s always good to have the lead signal caller in your corner as a wideout.