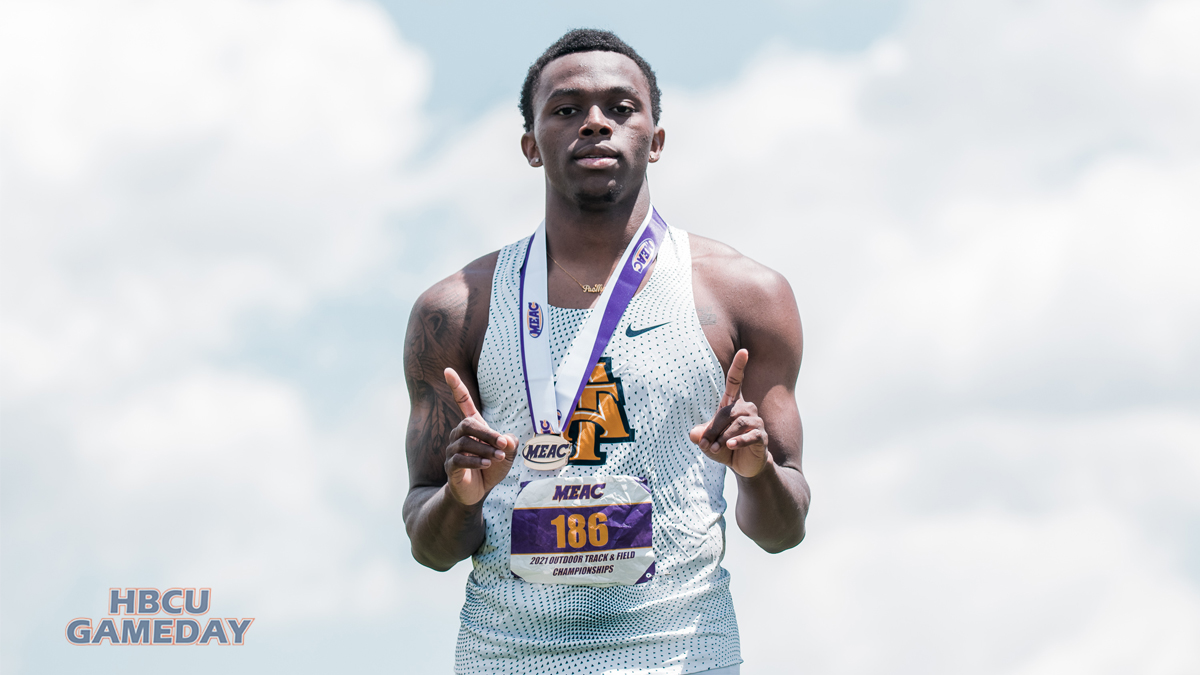 Javonte Harding sort of fell into the lap of North Carolina A&T track coach Duane Ross. This diamond in the rough is already making an impact on the national scene.

Ask Javonte Harding who was recruiting him out of high school, and he will calmly tell you.

“It wasn’t a lot, but I’ve had a few,” he said, gold chain sparking under the early afternoon sun. “Such as Texas A&M, Mississippi, the University of South Carolina. A few others.”

If you don’t know track and field, those are premier programs in the country that were interested in his services. And for good reason.

The Prince George, VA-product had a great first round at the NCAA Outdoor Track And Field East Regionals on Wednesday. He won his heats in both the 100m and the 200m. His 200m time of 20.32 was third-best in the field, while his 100m time of 10.19 was eighth-best in the field.

And he’s only a freshman.

North Carolina A&T head coach Duane Ross heard about Harding before he ever saw him run. His older brother, Dejuan, ran for A&T from 2015 through 2018. He told Ross about his brother, but Ross admitted he didn’t pay him much mind.

Then he saw him in action.

“But when I saw him out here at New Balance, immediately after the race I went to his mom and I said ‘this kid has a future in this event, in this sport, if he chooses it,” Ross said.

That family aspect gave A&T the inside track on Harding.

“I know the history behind it, and what they’re trying to do,” he said. “I knew that they weren’t just a track program — they were a family. So that was one of the major things that drew me here.”

Javonte Harding: The future of track?

Harding’s arrival has paid quick dividends for Ross and the A&T track program. His talents were on full display earlier this month at the MEAC track and field championships. He won both the 100m and the 200m and helped the A&T men win the 4x100m relay and the 4x400m relays as well.

“It’s a great feeling,” he said after his big day at the MEAC championships. “I’ve had a lot of big goals this year, especially since I didn’t get to finish out my high school season as a senior. I had a lot things that I’ve wanted to accomplish and to be able to come out here and accomplish all that is major.”

It would appear that Harding is just scratching the surface of his ability. And he’s got a wealth of experienced veterans around him to help get the best out of him.

“They push me a lot. So if we make mistakes, they make sure that we learn from it,” Harding said of his teammates. “Never hold your head down, no matter if it’s a bad race or a good race, hold your head up.”

It would likely be safe to wager that Javonte Harding has got plenty more good races ahead of him. Maybe as soon as Friday. He’s one of three freshmen who finished in the top 10 of both events.

No matter what happens this weekend, though, his coach sees great things ahead of him.

“He’s the future,” Ross said. “This kid is going to be the future of this sport.”