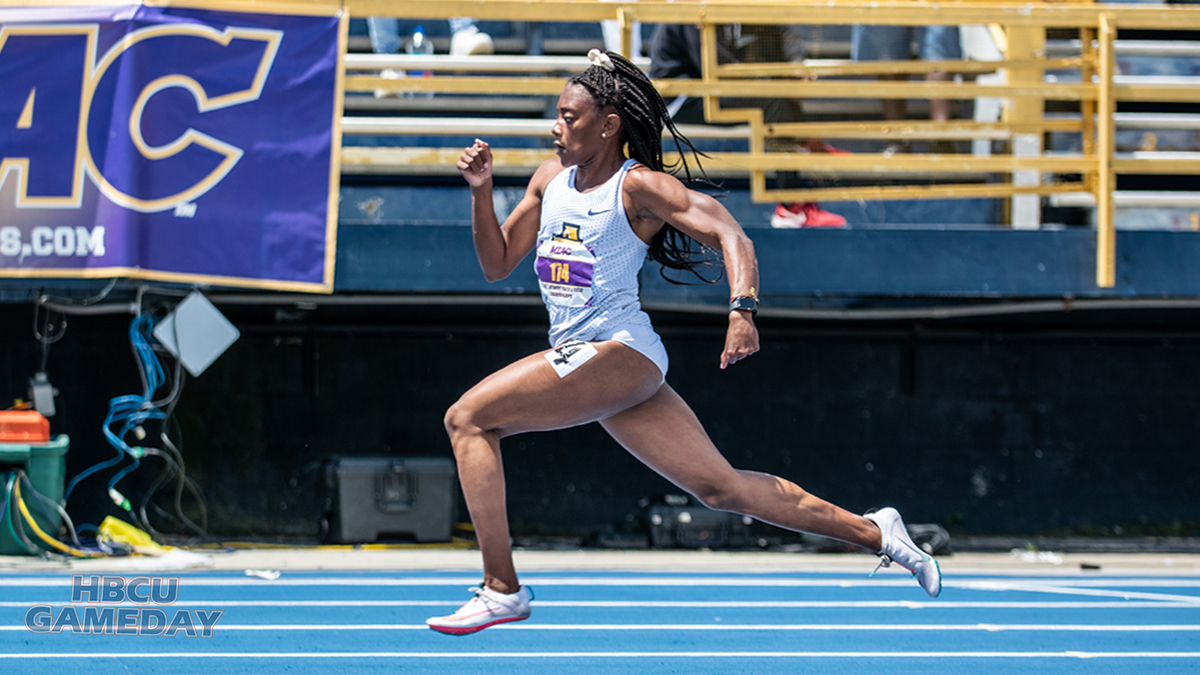 Cambrea Sturgis helped the A&T women surge to the top 20 with a dominant MEAC Championships performance.

Sturgis’s performance at the 2021 Mid-Eastern Athletic Conference (MEAC) Men’s and Women’s Track and Field Championships this past weekend at Truist Stadium on N.C. A&T’s Irwin Belk Track helped her earn USTFCCCA NCAA Division I Women’s national athlete of the week as the Aggie women ascended in the rankings.

The men moved up two spots to No. 9 in the nation after winning their fourth straight outdoor MEAC title.

“It is a well-deserved honor for Cambrea,” said Duane Ross, N.C. A&T’s director of track and field programs, after watching Sturgis help the Aggie women win their third outdoor conference title in four years. “She works hard and has big plans for NCAAs and the Olympic Trials.”

Cambrea Sturgis ran an electrifying 11.03 in the 100 meters over the weekend to claim the MEAC 100m title for the first time in her career. She is third in the nation in the event. Sturgis also won the 200m title over the weekend by running a 22.86.

Sturgis won her first 200m outdoor title after winning the 200m MEAC indoor title in 2020. She is now ranked seventh in the nation in the 200m. Sturgis also helped the Aggies 4×100-meter relay team win gold on Saturday. Sturgis teamed with junior Delecia McDuffie, sophomore Kamaya Debose-Epps and freshman Jonah Ross to run a 43.75 at MEACs to rank 10th nationally.

The weekend also significantly boosted senior TeJyrica Robinson, who won the 100-meter hurdles MEAC title by running a 12.90 to move to No. 11 nationally. Another hurdler, junior Sydni Townsend, ran a 58.09 to win the MEAC title in the 400mh to move 23rd nationally.

N.C. A&T also excelled in the field events. Sophomore Kenady Wilson jumped 5-feet, 10 ½-inches in the high jump to win the MEAC title and rank 25th in the country.

On the men’s side, freshmen Randolph Ross, Jr. and Javonte Harding excelled for the Aggies. Ross Jr. moved to fourth nationally in the 400m by winning the title in 44.60. He still trails senior teammate Trevor Stewart who is No. 2 nationally at 44.52.

Harding is ranked sixth nationally in the 200m after he posted a 20.21 to win the MEAC crown in the event. He also qualified for the Olympic Trials with his time. He won the 100m in 10.21 and is now ranked 20th in the nation.

Juniors Cory Poole and Rasheem Brown are 14th and 15th in the nation in the 100mh even though Brown claimed the MEAC title 13.61.