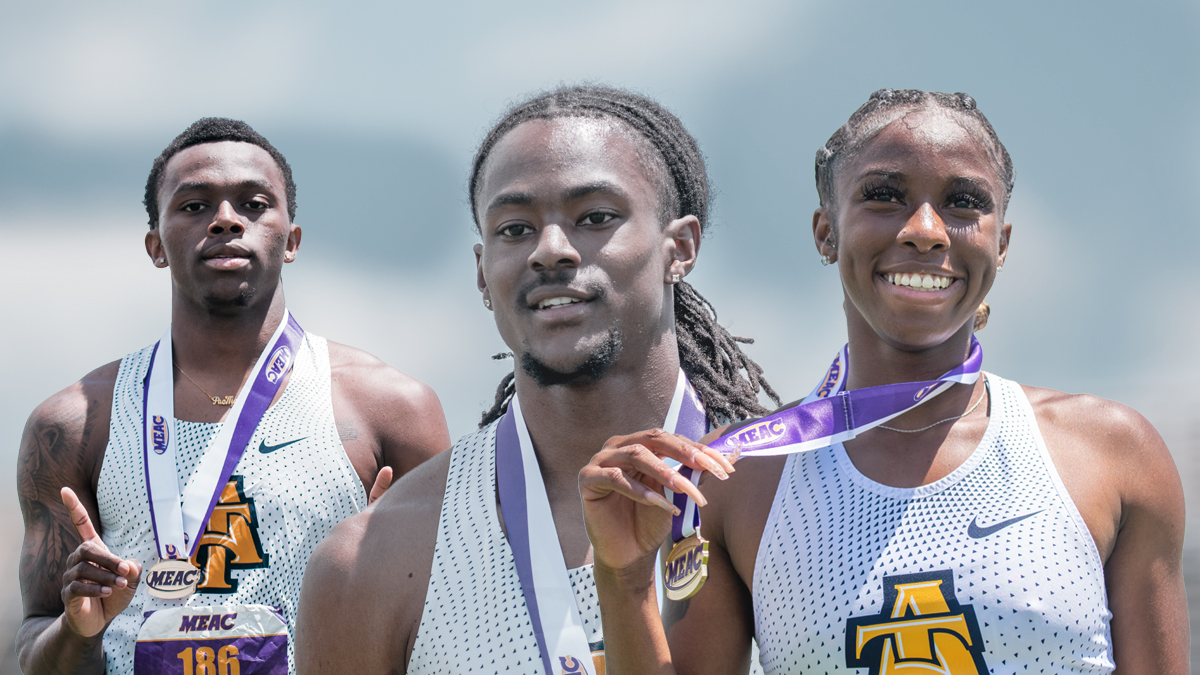 The North Carolina A&T track program is leaving the MEAC at the full height of its powers. Clearly, it has separated from the pack.

EAST GREENSBORO, NC — North Carolina A&T track hosted the 2021 MEAC outdoor championships, and it may as well have been practice. That’s no disrespect to the rest of the field, it’s just a measure of how dominant the track program has become in the last half-decade.

One telling aspect of that expectation of dominance was the post-race celebrations — or lack thereof. While athletes from other MEAC schools celebrated a (rare) break into the top three, jubilant celebrations were few and far between from the Aggies. Freshman Javonte Harding’s fist pump with his gold chain in his mouth after sweeping the 100 and 200m was about as jubilant as it got on this brisk spring day in the Gate City.

The same went for the medal platform. The Aggies smiled when the cameras demanded, but outside of that there was also a level of cool that bordered on nonchalance for many of them compared to their counterparts. While others basked in the glow of third and second-place finishes, they didn’t take any more photos than necessary. Clearly, they know that there is more to come.

A&T track and field head coach Duane Ross echoed the fact that this was far from the cherry on the top for the program.

“We trained through this competition. There’s some importance to running the MEAC championships, but we’re not gonna risk the NCAAs for it,” Ross said. “Our kids were a little heavy coming in here. So just to see them get up for this competition despite being able to train hard for the last three weeks — I mean that gives us a lot to look forward to in the next month.”

This was A&T’s swan song in the MEAC. The athletic program is moving to the Big South in July. Ross said the conference change will be felt.

“Our culture here, man, it was special,” Ross said. “Those guys will be missed. This environment will be missed. But there comes a time when we have to keep moving on. That’s life.”

A&T has been a member of the MEAC since the conference was founded in 1970. The roots are deep, and so are the ties between coaches.

“It’s bittersweet. We take home these trophies, but at the end of the night I’m going to be saying goodbye to some of these guys because I won’t seem them any more.”

When Ross arrived in 2012, he inherited a men’s program that had just three outdoor conference titles in 40 years of the conference and a women’s program with none. Under his tutelage, the men have won four straight outdoor titles and the women have three of the last four, including the last two.

North Carolina A&T Track is now a national powerhouse and a legit candidate to win the NCAAs, thanks to its improvement in distance and field events. That’s something we’ve seen happen regularly on the Division II level (Hampton and Norfolk State in their CIAA days, along with St. Aug for decades under George Williams) but not on this level since NCAA divisions became a reality in the 1970s.

For A&T’s track archetict, a conference change matters, but only to a point.

A&T’s time as a MEAC program is over, and it leaves behind a trail of records and trophies. In truth, its only competition has been itself for a while now. And that didn’t just happen on Saturday.