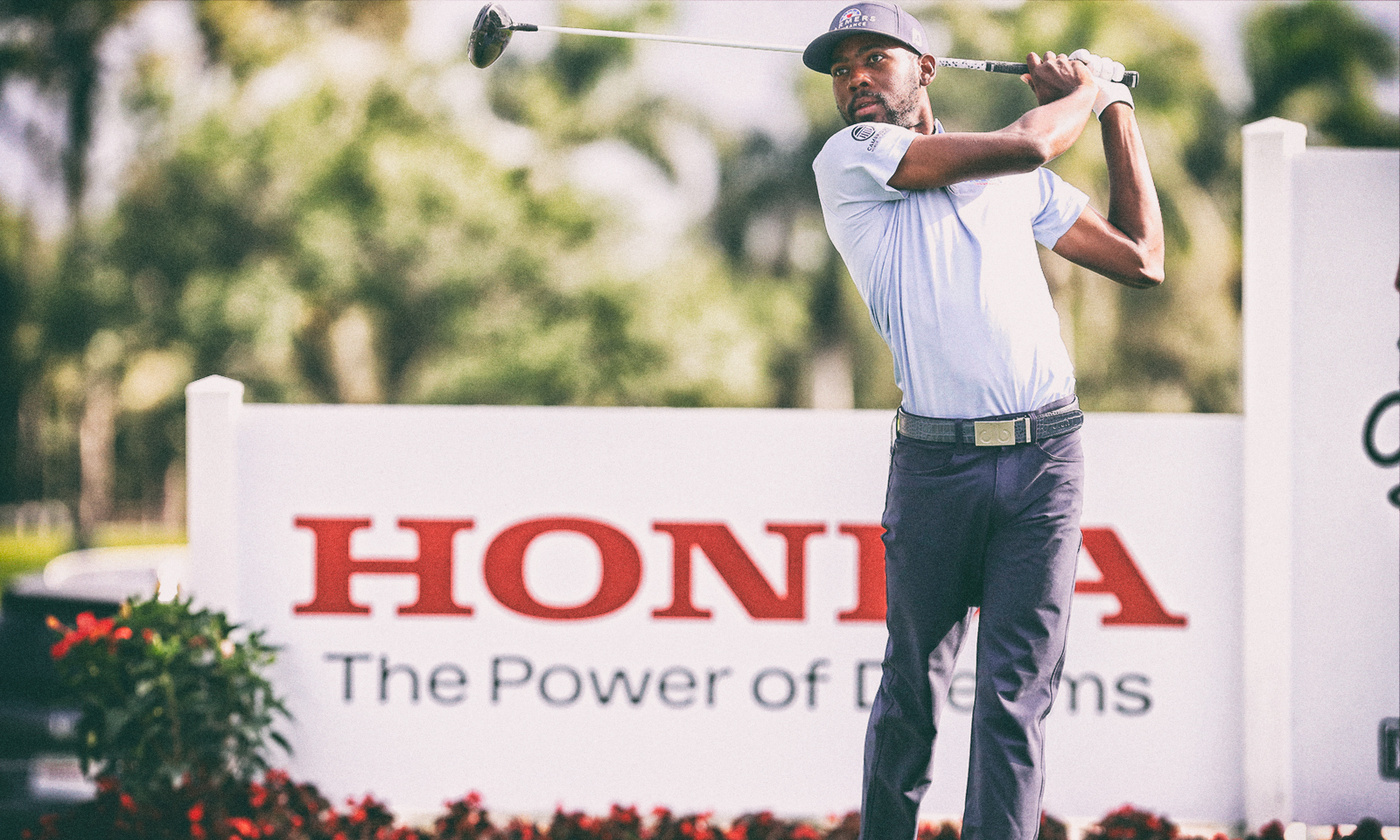 “It’s a great opportunity and a great learning experience.  You can’t figure out how your game stacks up on the PGA Tour until you’re out there…”

Just a few years ago, Kamaiu Johnson was not sure exactly what he wanted to do in life.  Options were limited as his educational history would provide an obvious hurdle for most individuals.  He would go from a middle school dropout to attaining his GED, but still not have a solid plan for the future.

For the last decade, he has been developing his skills as a golfer after falling in love with the sport.  His pursuit of the Professional Golfers Association (PGA) Tour could not have come at a better time.  The PGA Tour recently partnered with the Advocates Pro Golf Association (APGA) to grow the game of golf and encourage minority golf participation.  The APGA Tour hosts many events on many of the same courses as the PGA Tour, garnering exposure to golf at the highest level.

Emerging through the APGA with a solid Summer in 2020, Johnson shot even or under par in all rounds except two of the 25 events he participated in, winning a handful of events.

Garnering the attention of the PGA Tour and those in professional golf who began to learn his life story, Johnson got his first PGA Tour invitation under a sponsor’s exemption.  Media outlets swooned at the possibility that a young man with a plethora of obstacles had actually worked his way to the PGA Tour.

He attained a playing sponsorship with Farmer’s Insurance, who in turn invited him to his the Farmer’s Insurance Open, which was to be his first PGA Tournament on a sponsor’s exemption.  It would be a rollercoaster ride.  Just days before he was to have his ultimate dream come true of debuting on the PGA Tour, he would be stricken with COVID-19.  He had to shelter in place for 14 days in a California hotel before a barrage of promising news came even while he was quarantined.

Anyone associated with golf knows that these invitations were a blessing and a challenge.  Pebble Beach, Bay Hill and PGA National, the places where the tournament exemptions were offered, are some of the toughest courses in all of the PGA Tour.  Still, the opportunities will lead to growth as experiencing golf at the highest level is the best opportunity for Johnson to foster his exposure to the game that he loves.

“You never turn down an exemption invitation for a tournament.  It was in my mind that these three courses were tough even for seasoned professionals.  I know what I’ve got to do.  I’m excited for my upcoming events.  Not that it’s going to be easier, but I learned what not to do and what to do in certain situations.  I’m excited that my game is getting tight and I’m ready to tee it up again,” said Johnson.

He had the privilege of playing 36 holes with Brandon Hagy, who at the end of the second round was tied for second place in the tournament.  Playing beside Hagy was a valuable learning experience for Johnson.  “Playing the last two days with him (Hagy) I think he got up and down every time he missed a green.  I tells me that’s what you need to do out there.  It was very motivating honestly, it lets me know that I’ve just got to get better,” said Johnson.

Johnson made his first professional appearance at the Honda Classic event this weekend and it was another tough learning experience.  But, it was not without its highlights though.  No less than 12 people formed a gallery to follow and encourage Johnson on Friday’s round.  Included in the gallery was Jan Auger, the Hilaman Golf Course (Tallahassee, Fl) manager who is credited with fostering Johnson’s development in golf.  She walked all 36 holes Johnson played in the gallery with the look of a very proud mama.

A group of members from Seminole Golf Course in Tallahasse, a place where Johnson often plays, was also following Johnson’s every stroke.  Ryan Gay, Sam Fox, Cameron Clifton and Jerry Buscher were in Johnson’s traveling gallery for the entire 18 holes.

“We’ve been playing with Kamaiu at Seminole Golf Course since it reopened (after renovation by Jack Nicklaus) about a year ago.  He’s got a great head on his shoulders and we just want to see him do well,” Gay said.  “We drove all the way from Tallahassee to see him play, that’s how excited we are,” Buscher said.

Another group of golfers including Ed Gaines, Lester Word, Cardel Short and a couple of others who have played with Johnson in Tallahassee felt obliged to make the six hour trip to support one of their own.  “I’ve played with him (Johnson) since he was 14-15 years old and it’s gratifying to see him actually living his dream.  He’s on the PGA Tour and I think what’s more impressive is when you look at his background and his journey, which is not typical on the PGA Tour, it’s even more amazing.  We’re out here to support him and wish him nothing but the best,” Word said.  “I think this is a wonderful opportunity to inspire young kids and as a father of a daughter who enjoys golfing I really enjoy the fact that she can look up to somebody who resembles her and could influence her future,” said Short.

Johnson had his share of struggles in the two rounds he played at the Honda Classic, but it was not without its high points.  His solid driving was on full display on Friday, often being either in the center of the fairway or on the “correct” side to attack the day’s pin placement.  His iron play, both long and short was displayed as well.  With the traditionally tough placements at PGA National, he played a smart round of not attacking the pin when the greens would roll off if missed.

His biggest improvement will come in his putting.  Adjusting to the extreme undulations on PGA Tour greens is something that has to come with playing under those conditions.  One professional golfer once described putting on the PGA Tour as putting across a finely-waxed coffee table.

“My coach was telling me that we need to learn when to hit shots in certain situations.  I’ve got to go back and work on those shots and put them together when it’s the time to put them together.  I’m just excited to learn and to get better.  The Honda Classic was an amazing opportunity for me and I am grateful to everyone who created that opportunity for me to have that experience,” Johnson said.