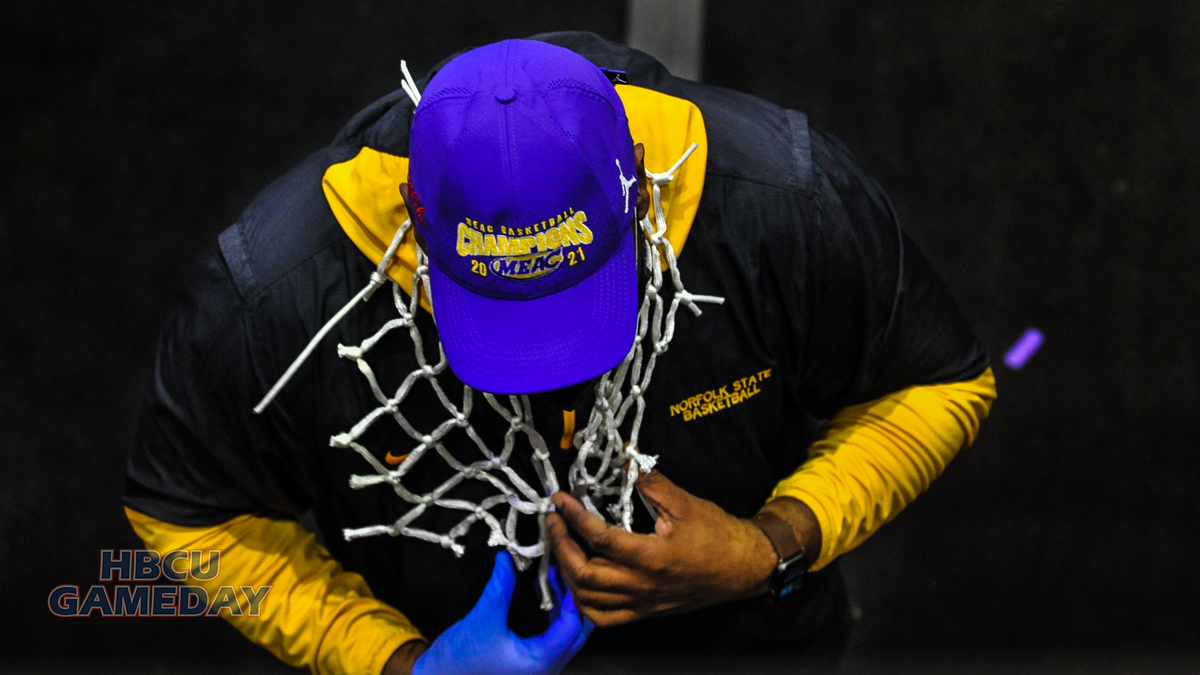 Norfolk State is happy to be in First Four

The words “First Four” are flat out despicable to many coaches. Not Norfolk State head coach Robert Jones.

Jones was part of the One Shining Moment Norfolk State has had in March Madness to this date. He was an assistant under Anthony Evans, and played an internal role in helping build the team that knocked off Missouri. That iconic 15/2 upset probably wouldn’t have happened if NSU would have had to play in the “First Four” the format formerly known as “The Play In Game.”

And despite that history, Jones told the media after winning the MEAC title that playing in the “First Four” wasn’t a problem for him. In fact, he welcomed it.

“You still get the same unit financially, so who cares?” Jones said at the post-game Zoom. “And then whoever you play, you’re going to play an opponent that looks just like you. So therefore you can beat them and your stay is longer.”

Just over 24 hours later, Norfolk State was in the play-in game. NSU will take on Appalachian State on Thursday evening. Texas Southern, the SWAC Champion, is in the “First Four” as well.

“So now the school is happy, they get $3 million or whatever it is. We’re happy because we stay a little longer, so who cares about that play-in game? I’m happy to be there. I don’t know what you’re talking about.

Jones’ stance is much different than that of North Carolina Central’s LeVelle Moton, the coach of the most recent MEAC team in the postseason.

Moton’s NCCU squads have had a taste of both. His first MEAC championship team in 2014 went 28-6 and was a no. 14 seed that took on a no. 3 in Iowa State. There was no MEAC magic for NCCU that night, and NCCU came away empty-handed.

NCCU’s following three NCAA appearances have all been in the First Four. All three of those have resulted in losses, including one to Texas Southern of the SWAC in 2018.

While the first four hasn’t been kind to NCCU, two other MEAC teams have managed to get wins in “The First Four” since Norfolk State took down Missouri in 2012. NC A&T did it in 2013, riding its Cinderella-like run to the MEAC title and turning it into a win over Liberty. Two years later, Hampton beat Manhattan after a similar run in the MEAC title game.

Texas Southern and NCCU got arguably even more spotlight for playing each other in 2018. While some fans of HBCUs cringed at putting the champions of the two Division I HBCU conferences in a battle royal, it at least guaranteed one of the two advancing to the next round.

The fact is, getting more money from the NCAA for advancing is always the goal. As great as upsets by Southern, Coppin State, Hampton and Norfolk State have been — being a March Madness staple only goes so far. Take it from someone who’s gone there before.

Norfolk State is happy to be in First Four