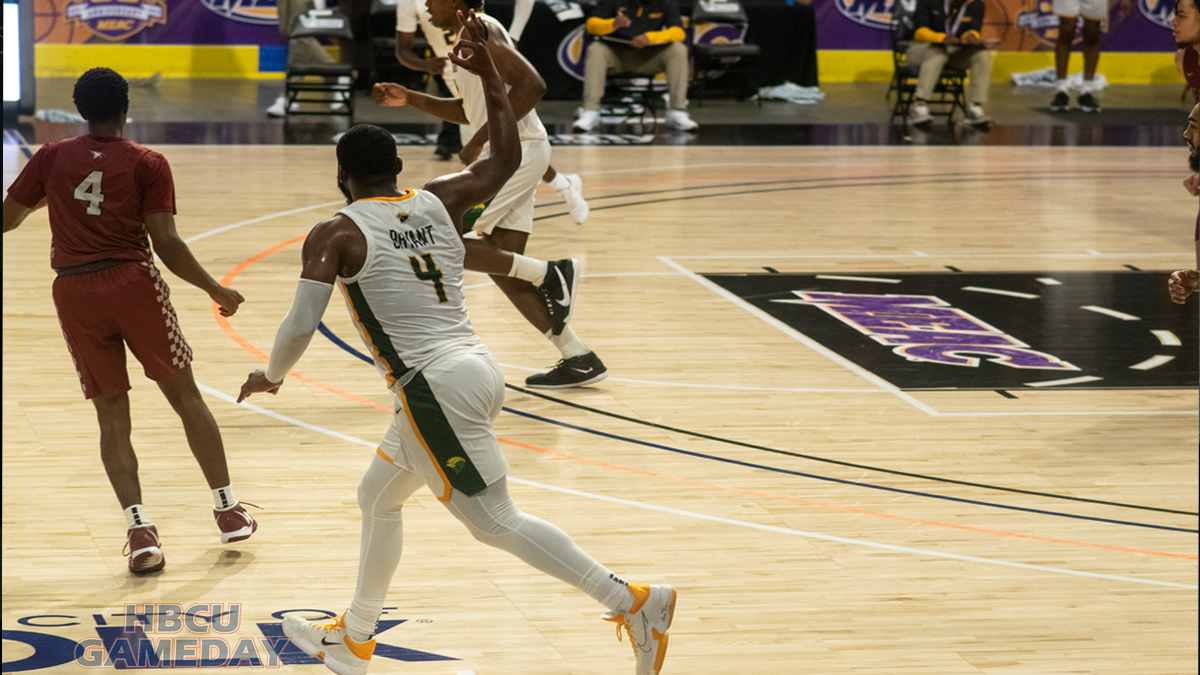 Norfolk State takes out years of angst on NCCU

NORFOLK, VA — Norfolk State probably didn’t need any motivation in Thursday’s MEAC Tournament opener at the Scope, but it got some. NSU head coach Robert Jones heard through the grapevine that North Carolina A&T’s basketball program might have had a positive test in its camp. If it was true, it meant that NSU’s quarterfinal against NC Central was more like a semifinal, with the winner heading to the championship game by default.

Jones told his captains first, then he decided to relay the message to the rest of the team before it went out on the court.

“I knew Central knew, so I didn’t want them to play with a bigger edge than we wanted to play with, so I had to relay the message to the team, and they really responded.”

Did they ever. Norfolk State started the game on a 17-0 run before NC Central scored more than seven minutes into the game’s opening half. The difference on the scoreboard was mirrored in the spirit on the NSU bench throughout the game.

“We knew the urgency. We knew that we were 40 minutes away from possibly going to Indiana. And we had to take advantage of that.”

And that’s what the Spartans did. The Eagles managed to cut the lead to 12 late in the first half, but the Spartans were relentless and came away with a commanding 87-58 win that put them into Saturday’s championship game with an extra day of rest to boot. It also ended a MEAC Tournament winning streak dating back to 2017.

Leading the way for Norfolk State was junior guard Joe Bryant Jr. His 30 points on 10-for-16 shooting from the field included seven 3-point baskets.

Not only did NSU and Jones get a win that kept their season alive, they also got over a big hump in LeVelle Moton and NC Central. The two programs were the most successful in the MEAC in terms of winning during the regular season. But Moton and NCCU have taken home four conference tournament titles since the tournament moved to Norfolk in 2013, while Jones and the de facto home team have yet to fully capitalize on its natural homecourt advantage.

Adding insult to injury, NSU was the runner-up in two of those championships in 2017 and 2019. NCCU has gone back to Durham with the trophy and been spotlighted on Selection Sunday, while NSU has had to face disappointment in its own basketball-crazy backyard. NCCU has a Hollywood-style docuseries on the Four Letter Network while NSU has had to fight for attention even in its own city with another mid-major program.

“He’s got me in the Scope the last two times, we finally got him… They run a great program. Like we always say to our guys, if you want to be the champ you’ve got to beat the champ. And they were the three-time champs, it was a war out there. We were able to come out with the victory.”

Bryant was a freshman on that 2019 squad that suffered a heart-wrenching last-minute loss to NCCU in the title game.

“The 2019 season, it was a bad feeling, obviously. Losing the championship, not going dancing,” Bryant said. “And last year with the COVID protocol and stuff that happened, we couldn’t play in the Scope all. So that loss to Central, it just stayed in the back of my mind and all season I’ve just been ready for it. I’ve been ready, staying in the gym and staying locked in.”

Now that NSU has gotten over the NC Central hump, it must get over the championship hump to truly exorcise all its MEAC demons. If it plays as inspired as it did on Thursday night, they might finally be happy in the 757.

Norfolk State takes out years of angst on NCCU