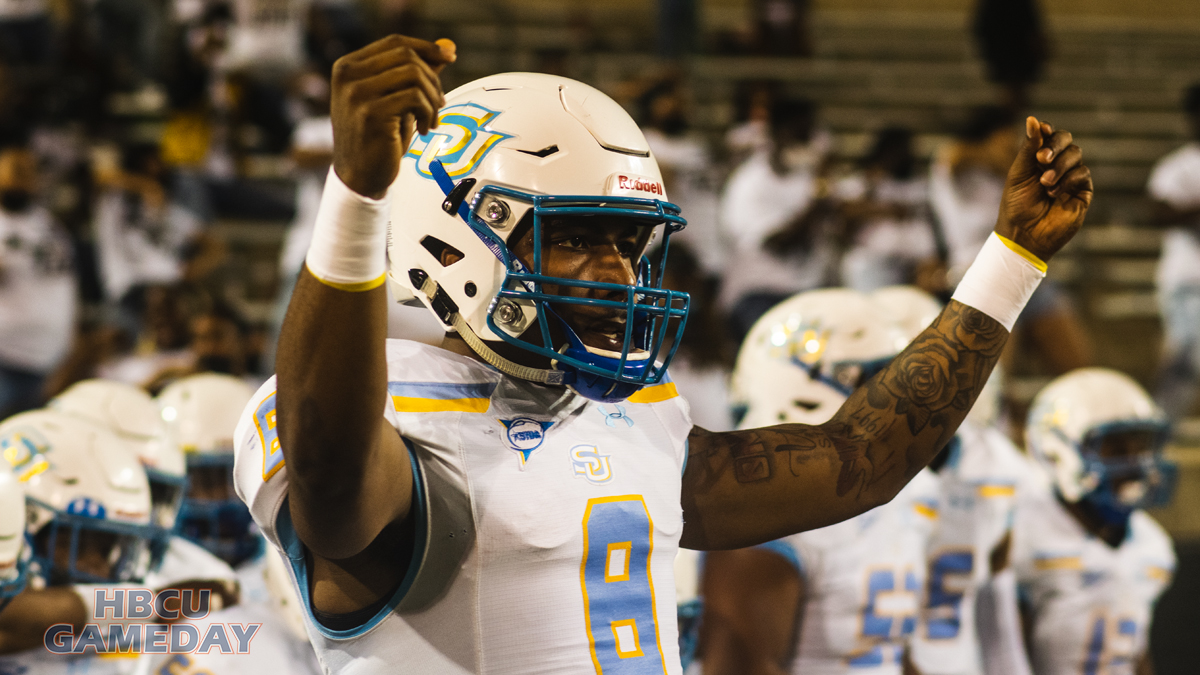 Why HBCU football matters, even in the spring

Spring HBCU football may not be the brand we know and love, but that doesn’t mean that it doesn’t have value to players and fans.

The two SWAC programs hooked up in Montgomery, AL on a sunny Friday night in February. And if you had been transplanted to the game from any year prior to 2020, you might have thought you were at an early October game based on the intensity of the game on the field— and in the stands as well.

When Southern University, dressed in its immaculate white uniform, gathered in the visitor’s entrance, the Jaguars were rained down upon with glorious boos like gladiators entering the Coliseum in Rome. The boos came from the student section, filtered through masks, which are mandatory at ASU Stadium, like most stadiums that will host sporting events in the near future.

The players (excuse me, student-athletes) were more than happy to jaw back at the crowd of mostly young ladies. The intensity was tattooed on their faces as they prepared to do something they hadn’t done since Nov. 2019 — play the game that they loved. And do it in front of a national audience as well.

On the other side of the visitor’s entrance was ASU’s band “The Mighty Marching Hornets” and their dance team, the lovely “Stingettes.” And if you are wondering, The Honeybeez did not make an appearance. Both groups wore masks, something they hadn’t had to do before the world turned upside down roughly a year ago.

The band played the “Star-Spangled Banner” and “Lift Every Voice And Sing” to perfection. By this point, both ‘Bama State and SU had made their way to the entrances and prepared to run through the tunnel.

Suddenly, the band went from conservative to celebratory with a few hand motions from its directors. The percussion started percussin,’ the horns started blowing and quickly I deciphered that the song was “Money Maker,” a song created by non-other than ASU’s own Tauheed Epps, AKA “Tity Boi” AKA “2 Chainz.”

The track actually has Southern University’s Human Jukebox playing its version of Guy’s Piece of My Love. The song was released in 2020 as a marching band anthem. Of course, there was no HBCU football last year (except a few games from Florida Memorial before COVID-19 shut it down.) So to hear it being played at an actual football game between the two programs was pretty damn powerful. It was one of those “when-sports-is-actually-bigger-than-sports” moments.

A Year Without HBCU football

I wasn’t supposed to be here. I was supposed to be in Baltimore covering the CIAA Tournament leaving the state of North Carolina for the first time since before there was a real internet. Not at a SWAC football game in February. At least that’s what I thought last year.

I was at the MEAC basketball tournament when COVID-19 shut down the NBA, NCAA Tournament, and eventually pretty much everything we can usually look forward to. Including HBCU football.

More than half a million lost lives later, it’s clear that the impact has gone far beyond what we could have ever expected. Pretty much all of us knows someone who has contracted COVID-19 or contracted it themselves. Last December I tested positive. By the grace of God my symptoms were rather mild. I mostly had a low-to-mid-grade fever with some body aches. I kept it close because I figured I would be okay, and eventually, I was, but so many other people were not.

Even as I recovered from the physical impact of COVID-19, the mental effects of what comes along with it — the isolation, the uncertainty of what future impact the virus could have on the body, watching other people die way too soon because of it — don’t just go away with a negative test result.

Add in the political unrest in the country, the cumulative impact of four years of an unashamed embracing of white supremacists and bigotry at the highest levels of government. That simmering pot boiled over in the form of a violent insurrection at the US Capitol. Something I still can’t get out of my head nearly two months later. And, of course, the never-ending list of names of black men and women who have died violently in the name, spirit or theology of white supremacy.

It’s enough to make you holler and throw up both ya hands. Word to Marvin Gaye.

Of course, not everything has been bad over the last year. HBCUs have experienced visibility I certainly haven’t seen since I started Gameday in 2012, and maybe we’ve never seen before. Particularly in the sports arena. Howard actually landed a five-star recruit. Others (yes, you Mikey Williams) could be in the pipeline. Chris Paul put on for HBCUs in the NBA Bubble and beyond. And Deion Sanders not only became an HBCU coach, but he also put together the top-rated class in HBCU history.

All of these things have been amazing to watch, cover and contextualize over the past year. And they’ve been good for business.

But as the lights turned on in ASU Stadium and that band hit those notes and those students gave the football players the business — it touched something in me. Something that writing about those other events just didn’t quite do. The pagentry, the unashamed blackness and joy on display at an HBCU football game is something that is unique to that experience. Something that has the power to, if only for a little bit, distract from the ugliness and uncertainty in this world.

Take The Stingettes, for example. Every twist, turn and hair flip was cheered with just as much exuberance as each touchdown was. Maybe a little more.

At 35, I expect to be here to feel the vibes of HBCU football — HBCU sports as a whole — for decades to come. But this past year has taught me that nothing that brings you joy and happiness should be taken for granted.  Even HBCU football in the spring.

There was a going on Friday night as I soaked in these thoughts. The record will show that Southern defeated Alabama State 24-21 in a game that went down to the wire. After it was over, Southern had to walk back through that corridor that it burst out of a few hours earlier. The young men, gleeful after having won a football game for the first time since November 2019, were more than eager to make sure the student section got an earful as they went into the locker room. The student section went right back at ‘em.

Spring HBCU football may not be everything we know and love at the moment, but it was everything I needed Friday night.

It was a beautiful night in Montgomery, AL. Here is to more of them in 2021.

Why HBCU football matters, even in the spring