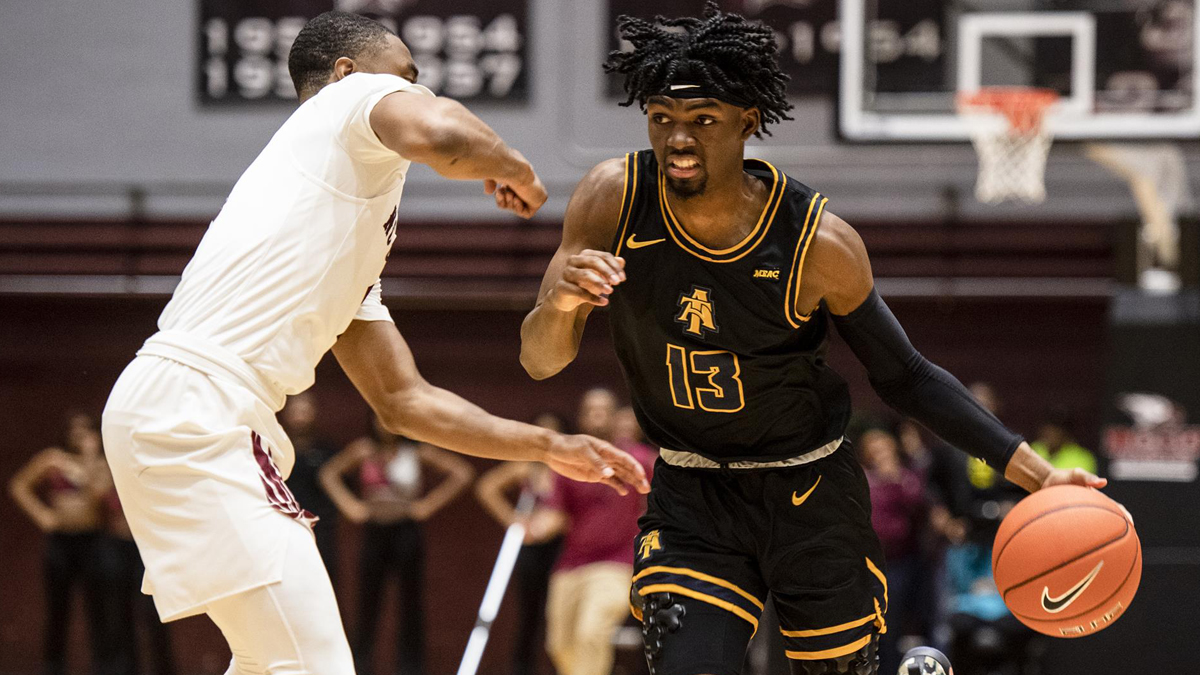 North Carolina A&T continued its winning ways against North Carolina Central on Wednesday, setting up a big showdown on Saturday in Greensboro.

North Carolina Central has ruled the MEAC since 2017, but its soon-to-be-departing rival North Carolina A&T continues to show the rivalry is far from one-sided.

NC A&T took it to NC Central in the first meeting of the season between the two schools as it came out with a 79-63 win in Durham. A&T improved to 10-10 overall, and more importantly, inched one step closer to clinching the first-ever MEAC South division title and a no. 1 seed in next month’s MEAC Tournament.

The Aggies got off to a fast start and led by as many as 10 points in the first half. But the Eagles were resolute, and at halftime faced just a 35-34 deficit. That was as good as it got for the home team, however.

The Aggies came out focused, led by senior guard Kam Langley, who head coach Will Jones said he thought tried to do too much in the first half.

“Kam Langley was playing around in the first half, trying to do a Superman trick,” Jones said. “So at half time he took his cape off and got the team going. Once he came out and put pressure on the zone, it wasn’t really anything they could do.”

A&T led by as many as 20 points in the second half to secure the win. Langley finished with  11 points, nine assists and three steals

Kwe Parker led A&T with 15 points, but four players scored in double-figures. Webster Fillmore had a big game for the visitors with 12 points and 13 rebounds in the win.

This was the first game between the two teams after the initial doubleheader was set for earlier in this month. That doubleheader was postponed due to unspecified COVID-19 issues within the NCCU program. This was supposed to be round three of four, but instead, the two teams are only scheduled to meet again on Saturday in Corbett Sports Arena.

It was the latest instance of the Aggies taking it to the Eagles, who have been the dominant team in the MEAC over the last decade.

North Carolina A&T is 6-4 against North Carolina Central since the 2016-17 season when NCCU started its run of MEAC Tournament titles. Take away a 2019 MEAC semifinal matchup and A&T is 6-3 over that span. NCCU has a combined 16 losses to the rest of the conference during that span.

Saturday’s matchup will be the final one as a conference game as A&T will transition to the Big South starting July 1. There is a chance that with NC Governor Roy Cooper relaxing COVID-19 curfew restrictions, there could be the largest crowd of the year for either program.

Either way, it’s a big game for more reasons than one.