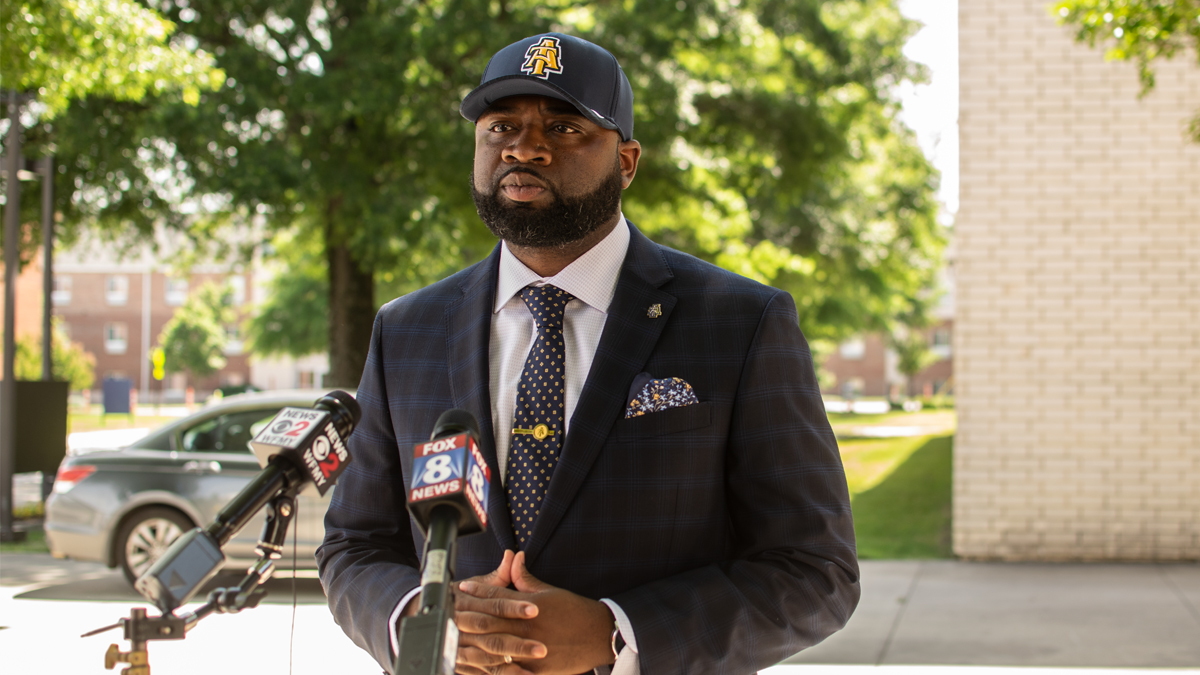 Will Jones sees a bright future for North Carolina A&T basketball. One where it leverages its size and resources to compete with anyone.

North Carolina A&T is one year away from starting a new conference, but a new era has already begun for its basketball program.

Will Jones was officially introduced (perhaps, in the COVID-19 era, unmasked is more appropriate) as the program’s full-time head coach in press conference in the shadow of Corbett Sports Arena on Tuesday afternoon.

Backed with the confidence of a solid half-season of basketball as acting head coach, and a fresh four-year deal, Jones didn’t hesitate to set the bar high for him and his program.

“What better time than now to take our place at the table?” Jones asked the crowd. “The largest HBCU in the world. The most progressive HBCU in the world. We are the HBCU that can sit at that table and bring those top, talented athletes to our campus and allow them to be successful.”

The Aggies went 14-5 under Jones after he took over for his former South Carolina State teammate Jay Joyner, whom he served as an assistant for several years. The team picked up the pace and tempo under Jones, led on the court by All-MEAC big man Ronald Jackson and NCAA assist leader Kameron Langley.

Langley put his name in the NBA Draft waters, but announced earlier this month he’ll be returning for his senior season. That’s big for Jones and Co. as they look to make a push to add one more MEAC title and NCAA Tournament appearance before heading to the Big South starting in 2021-22.

“We want to definitely leave our mark on the MEAC this year, and achieve what we hope to achieve this year, and that’s getting to the NCAA Tournament and winning a championship,” Jones said.

Another MEAC title would give A&T seventeen in the conference’s fiftieth year, by far the most of any program in the conference. It would certainly be a nice parting gift, but Jones wasn’t shy about stating that he hopes to build a program that wins year in and year out.

“I think that it’s my time, my staff’s time to take this program to a level that no other HBCU has had an opportunity to get to; and that’s being consistently one of the best mid-major plus programs in the country, year-in-and-year out,” he said.”

A&T’s basketball program had a seven-year run of MEAC titles in the 1980s under Don Corbett. That kind of run would be tough to top, but clearly Jones has confidence in himself and his program.

“That’s going to take a lot of hard work, a lot of vision. I don’t have a mindset to just be good in the league’s that we’re competing in—  whether that be the MEAC or Big South — my vision is to be one of the best mid-major plus program’s in the country and that’s what we’re going to do.”

Investing time and money in recruiting

To build that kind of program, though, you have to have players. Really good ones. The type of talent that people are hoping finds its way to HBCUs.

In fact, even before Mikey Williams’ tweet and Rickey Smiley’s meme sparked the conversation about top talent going to HBCUs, Jones was setting the table to pull in some big-name players. California to offer the sons of LeBron James and Dwayne Wade.

“We want to make sure that we do our part and hopefully some good things happen for us on the back in,” he said.

When asked by a chuckling reporter if either player had accepted, Jones’ expression remained serious, focused, and hopeful.

“LeBron’s son — he has a couple more years in high school and Dwyane Wade’s son is still in the process, so we’ll see how it goes.”