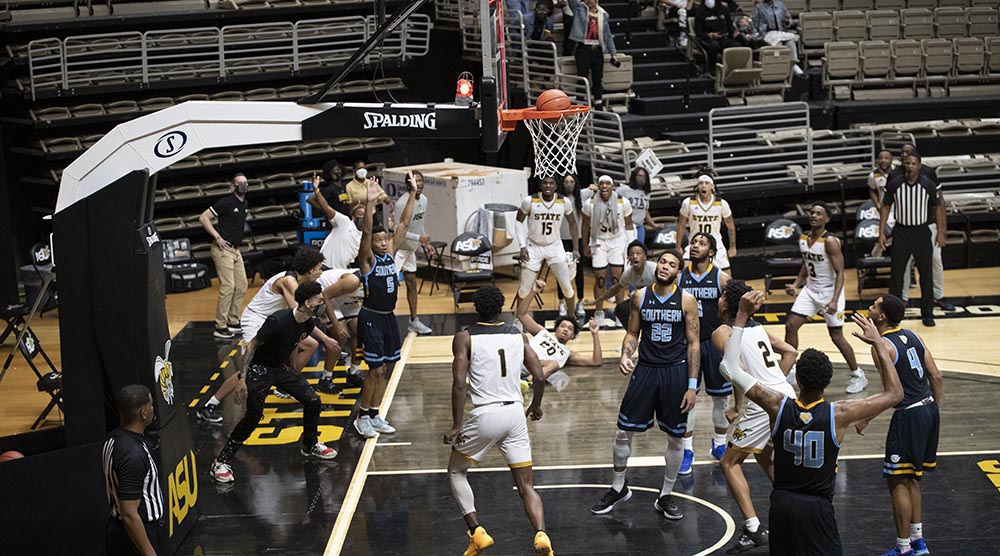 Alabama State picked up its second win of the season in dramatic fashion with a buzzer beater that made Sportscenter.

COURTESY: ALABAMA STATE
MONTGOMERY, Ala. | As the clock dwindled in a tie game after a blocked shot, the ball found its way into the hands of Kenny Strawbridge of Alabama State.

And the redshirt sophomore delivered.

Strawbridge was able to get a shot off amongst the Southern defenders, and the ball bounced around the rim three times before falling in for a 66-64 buzzer-beating Southwestern Athletic Conference (SWAC) victory for the Hornets at the Dunn-Oliver Acadome Monday night. The play made Sportscenter.

The game was the second consecutive at home in which Alabama State (2-5, 2-5 SWAC) trailed an opponent by double digits before coming back to take a second half lead. The Hornets trailed by 15 with 8:32 to play in the opening half (25-10) and trailed 28-21 at the break.

The Jags took a 54-51 lead just two minutes later, before the Hornets tied it again with 6:21 to play and the two teams would trade baskets until the Hornets took a 59-54 lead with 4:23 to play on a Tate three-pointer setting the stage for a wild final minute of basketball.

After Southern tied the game at 60-all, Tate struck again and gave Alabama State a 62-60 lead with 57 seconds remaining. The two teams traded baskets again until a Jayden Sadler layup with 5.9 seconds left looked to send the game to overtime.

Alabama State called a timeout to set up the final play that had Tate bring the ball up the left side of the floor. His jumper was blocked and fell into the arms of Jordan O’Neal who lost it before Strawbridge picked up the loose ball with three-tenths of a second remaining for the win.

Strawbridge picked up his third double-double of the season, finishing with 16 points and 14 rebounds; while Tate finished with 14 off the bench, including three three-pointers. Jordan O’Neal finished with 10 points and seven rebounds for Alabama State who finished the night shooting 38.6 (21-for-59) percent from the floor and 36.8 (7-for-19) percent from beyond the arc.

The loss was the second in a row for Southern, which lost to Alabama A&M on Saturday night.

Alabama State returns to action this weekend with a road trip to Texas, facing Texas Southern Saturday night at 7:30 pm. The game can be heard on the Hornet Sports Network.