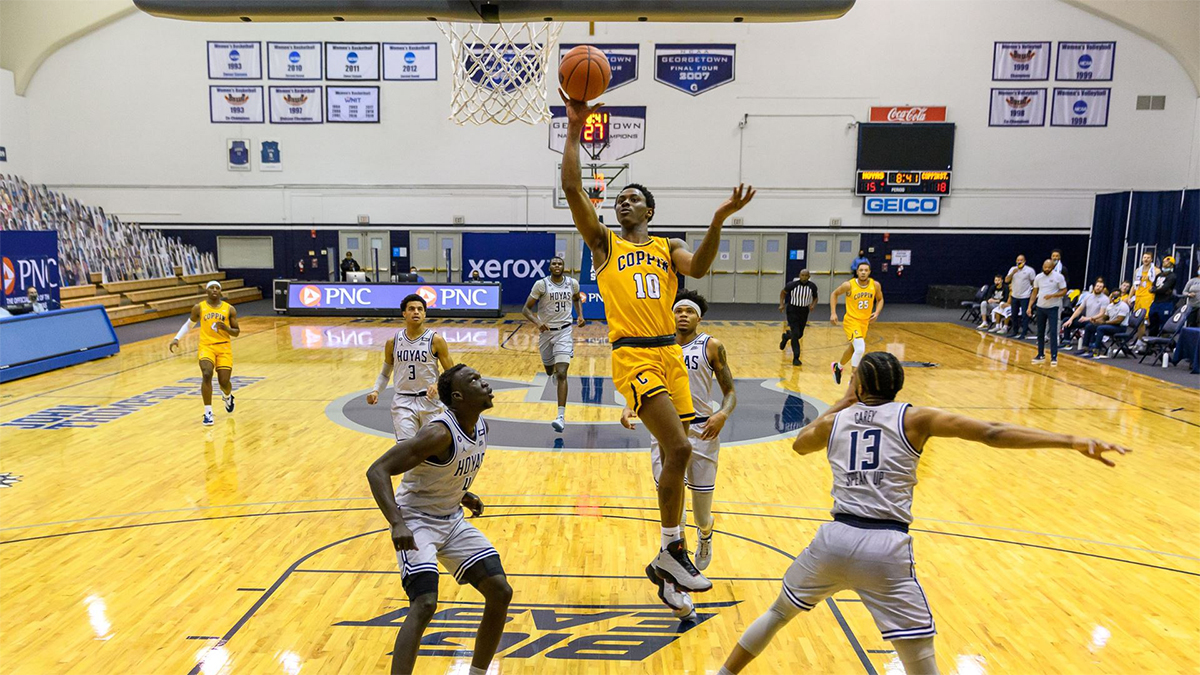 Coppin State got a valiant effort from Koby Thomas, but it was not enough to come up with a win on Saturday.

TOWSON, Md. – Koby Thomas notched a double-double with 23 points along with ten rebounds but poor foul shooting plagued Coppin State in a 78-73 loss at Towson on Saturday at SECU Arena.

A senior from Philadelphia, Pa., Thomas made 8-of-14 field goals with a 3-pointer and six free throws to record a season-high in points and rebounds.  Thomas, who was one of four Eagles who scored in double figures, also dished out four assists.

Also contributing on the offensive end was Kenan Sarvan with a season-high 16 points on four 3-pointers, Kyle Cardaci added 14 points with an identical four triples, and Anthony Tarke chipped in with 12 points. Isaiah Gross also drained a pair from distance to finish with six points. Cardaci was also credited with a career-high five assists.

Coppin (1-8) got out of the gate strong and used an 11-0 run early in the first half to take a 20-7 lead with 11:42 remaining in the period.  The Eagles’ run started with back-to-back 3-pointers by Sarvan and following a layup by Cardaci off a pass from Kaelon Harkema, Gross hit another triple to give CSU its largest advantage of the day.

The Tigers responded with ten-straight points of their own until jumpers by Dwaine Jones, Jr., and Tarke increased the lead back to 24-17.  Both teams exchanged blows for the remainder of the stanza, but Towson took its first lead since the opening minute of the game at the break, 34-33.

Back-to-back dunks by Tarke and Thomas, and another layup by Thomas, started the second half for CSU.  Towson answered with a jumper but Cardaci and Sarvan hit a pair of shots from deep giving Coppin back the 45-38 advantage at the 16:24 mark.

TU rallied back once again, but after a jumper by Tarke put the Eagles back on top, 56-54 with 9:17 remaining, the Tigers scored eight-straight points and never looked back.  The hosts extended their lead to as many as 71-58 at the 3:41 mark.

CSU made a late run, cutting the deficit to as little as 77-73 with ten ticks to go, but could not get any closer.

Rider hosts the Eagles on Tuesday, December 29 at 7 pm in Coppin’s final non-conference tilt of the season.  The Eagles open MEAC play on January 2-3 when the host Delaware State on back-to-back days at 3 pm.