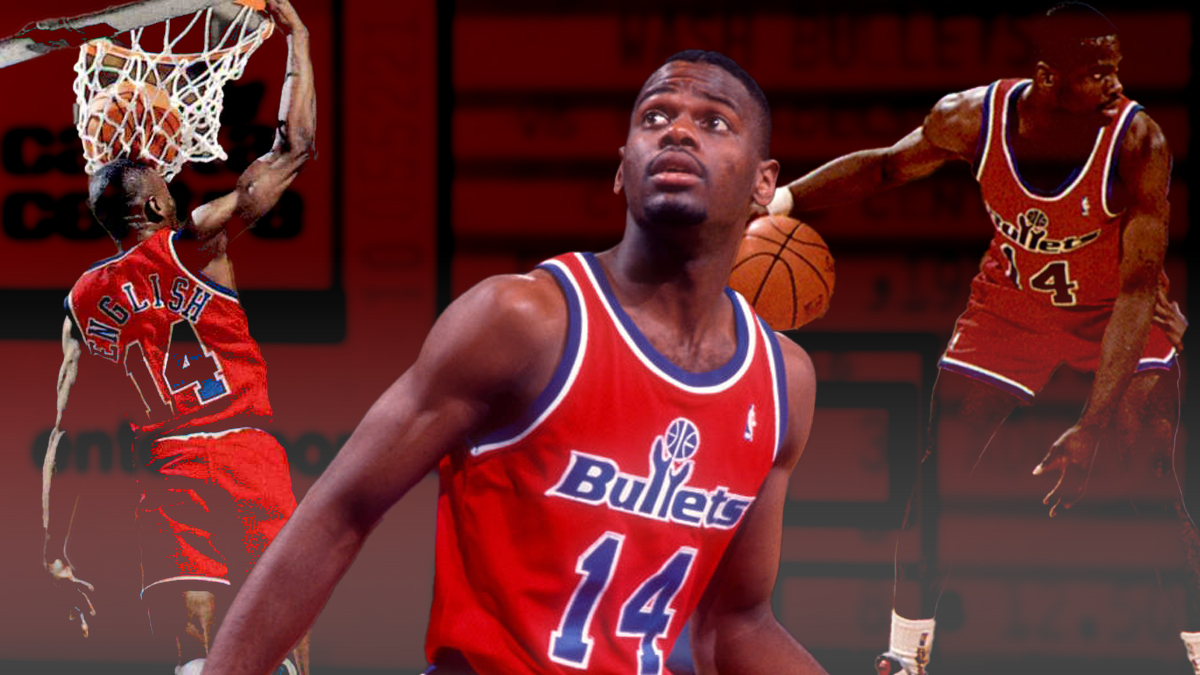 The Legend of (A.J.) English: Part II — Faster Than A (Washington) Bullet

After averaging double-figures in limited time, Washington’s A.J. English disappeared from the NBA as quickly as he proved he belonged.

By the time A.J. English arrived in Richmond for his senior season in the fall of 1989, he could smell the NBA within his reach. His teammate and roommate Terry Davis had just signed with the expansion Miami Heat after averaging 22.3 points and 11.9 rebounds per game during his senior season.

“There are scouts who’ve come in here specifically to look at Terry Davis,” Dave Robbins told The News Journal (Wilmington, DE),” and left shaking their heads at what A.J. can do. I’m not surprised he’s developed into this type of player. You could see the ability he had coming out of high school.”

English fulfilled his coach’s wildest dreams— and more — as a senior. The offense revolved around the bouncy guard from Wilmington and he put up perhaps the greatest season in CIAA basketball outside of Earl Monroe. He averaged 33.4 points per game, scoring 1,001 that year, while shooting 49.6 percent from the field and 45.1 percent from the 3-point line.

He finished his career ninth on the CIAA’s all-time scoring list.

With his college career complete, English headed down I-64 from Richmond to the 757 for the Portsmouth Invitational Tournament. The invite-only senior showcase had helped dozens of CIAA and small college players raise their stock over the previous three decades. It gave players from smaller schools a chance to show pro scouts whether or not they could hang with big-time college players.

All English did was dominate, just as much as he did in college. He averaged 33 points per game at the PTI — the same as his senior season — including 44 points in his first game. He shot an impressive 57 percent.

“This is my chance to show what I can do,” English told the (Newport News, VA) Daily Press. “To show everybody that being named Division II Player of The Year was not a fluke.”

English said he knew the Lakers and Nets were really interested in prior to the draft. But John Nash, a Philly guy, had just gotten the job as the Washington Bullets General Manager, and he had eyes on English.

“I was kinda upset I went in the second round because, by that time, I’m thinking I belonged,” English said. “I remember when the first round was over and I was at Coach Robbins house watching the draft, whole family there, and my agent called and was like ‘we don’t know what’s going on, just hang tight, you’re not gonna be on the board long…”

“Once I got there, I always felt as though I belonged there,” English said.

His second game found English and the Bullets matched up with the Chicago Bulls and Michael Jordan, at the height of his powers. English scored 13 points off the bench and the Bullets knocked off the eventual world champs.

It wasn’t the first time that English had matched up against His Airness, whom many compared his game to favorably during his time at VUU.

Despite his second-round status, English played a solid role with the Bullets as a rookie, averaging 8.8 points and 2.5 assists per game in 70 appearances, including 12 starts.

He put up those solid numbers despite being asked to play out of position. English’s scoring prowess had gotten him to the league (remember he averaged 33 ppg as a senior in college) but as a 6’3 guard, he was asked to play point guard for the Bullets at times, just as he had been at VUU. As a second-round draft pick from an HBCU, and a kid from a tough background, he knew he had to do what he had to do to stay on the court.

He got the chance to start against the Cleveland Cavaliers in February of his rookie season and had a big-time performance, scoring 31 points and dishing out 10 assists.

The fun would continue into English’s sophomore season. Though the team had a crowded backcourt of eight players at one point, including first-round draft pick LaBradford Smith, English made the roster and guaranteed his $400,000 deal.

“I didn’t come out here asking for any handouts,” English told the Washington Post’s David Aldridge. “When I’ve gotten the time, I’ve shown them what I can do. Now I just want to get the time on a consistent basis. If I get the time, I don’t have anybody else to blame but myself if I don’t do the job.”

English finished the season averaging just under 11 ppg putting him at an average of 10 points per game his first two seasons.

His numbers weren’t All-Star worthy, but they were decent for a some-times starter in a crowded backcourt. During the season the team had reportedly offered him a three-year deal during the season to re-up after his initial two-year deal was up.

His agent asked for $800,000 as Smith was making about that much, despite sitting behind English as a rookie. English says the team was looking closer to the $650-700k range.

“He was was a football agent, but he was trying to use football tactics in basketball,” English said.

During the time English’s agent — whom he declined to name — was trying to secure more money, the Bullets traded for Rex Chapman. That move gave the Bullets a bit more leverage and crowded their backcourt quite a bit more.

“Me now, knowing what I know now at 52 years old…I would have signed the deal. Coming from Wilmington, DE…we weren’t living in cardboard boxes, mom my did her best for us…but anything would have been better than how it worked out.”

Ultimately the Bullets decided that Chapman was the team’s starter and English signed with a pro team in Trieste, Italy that September.

“I had a long career overseas, I did well for myself over there,” English said matter-of-factly. “But I don’t know the player that I probably would have been if I would have stayed in the NBA. Iron sharpens iron, you play around better players, you’re around better situations, quite naturally you’re gonna get better.”

English would sign as a free agent with the Portland Trailblazers in October 1993. But a hip injury limited his explosiveness, and he averaged just four points per game that preseason. He was cut by Portland without playing a regular-season game. He would never play in the NBA again.

While he has moved on with his life, and continued his basketball career, he admits that making the money move probably cost him in the long run, as this was just before million-dollar deals became much more plentiful.

Consider the path of another fellow HBCU star and NBA contemporary, Bobby Phills. The Southern star was picked in the second round of the 1991 NBA Draft, a year after English. Both players were similarly skilled, high scorers in college who had to adjust to the pro game. He played less his first two seasons than English — and made less —  but found a role as a defensive standout and spot scorer in Cleveland. By 1997, he had signed a seven-year, $33 million deal.

There’s no guarantee the same thing would have happened for English, but the promise he showed in two seasons goes to reason that it was very much possible. And English knows it.

“I listened to an agent, and I wish I didn’t. That’s the only thing…when I look back at, I’ll be like ‘yeah I had a great career, but what kind of player would I have been (if I stayed in the NBA)?”

Sadly, that’s an answer we will never know. But English’s basketball life was far from over.

Check back for Part III of The Legend of (A.J.) English.

The Legend of (A.J.) English: Part II — Faster Than A (Washington) Bullet