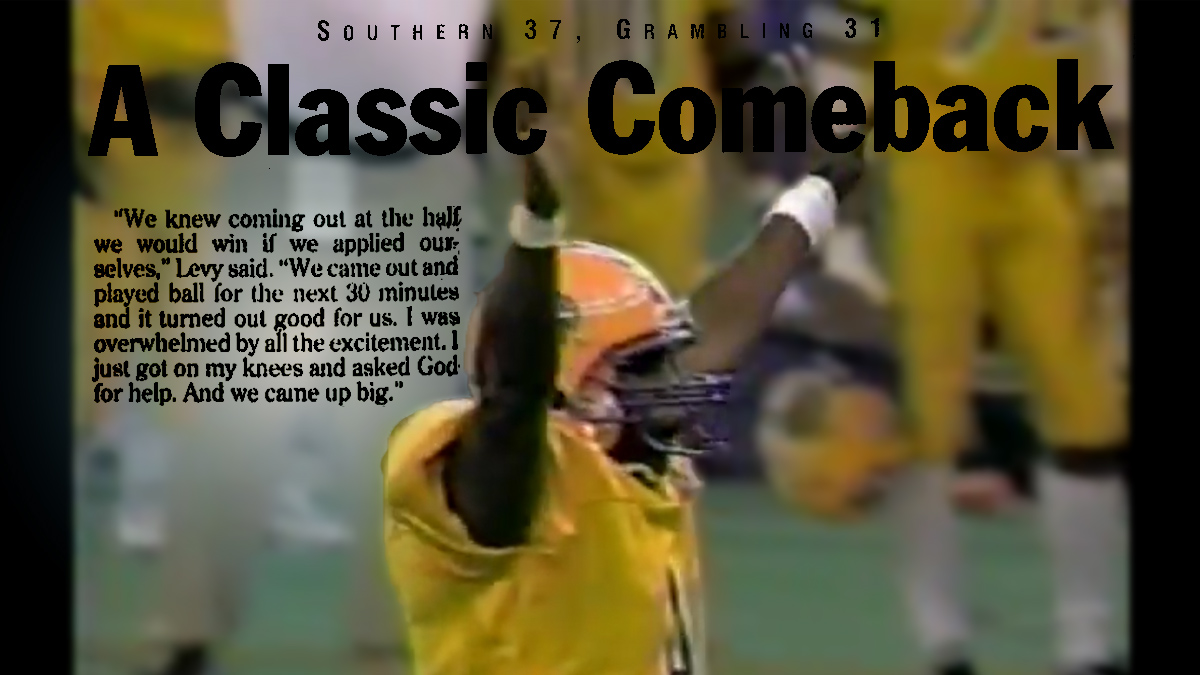 There have been many thrilling moments in Bayou Classic history, but few compare to what took place on Nov. 27, 1999.

The Bayou Classic has a long, storied history. The annual rivalry game between the two Louisiana HBCU titans, Southern University and Grambling State, has been a national spectacle for 45 years.

Both teams have had stretches where they have dominated the other. The first two decades were dominated by Grambling, as Eddie Robinson’s juggernaut went 13-6 over the first 19 games. Then along came Pete Richardson, a former NFL defensive back from Ohio by way of North Carolina who returned the Columbia Blue and Gold to glory.

Richardson was hired in 1992, a few months after his Winston-Salem State team took a solid beating to SU in Alexandria, Louisiana. He had won three CIAA titles in five years after taking over for Bill Hayes, but no one outside of North Baton Rouge thought he would be able to pull Southern into a consistent contender in the mighty SWAC. All Richardson did his first season was beat Robinson’s Tigers and move the balance of power from North Louisiana to South Louisiana.

By 1999 the Jaguars were the big cats of the SWAC, having won 27 consecutive conference games. Led by its “Dog Day Defense” and a solid offense, SU was the two-time defending champion heading into the Nov. 27 showdown with Grambling and looking to add a third. To get that third title, it would have to win the conference’s newly established championship game where eastern division champion Jackson State awaited. All that stood in its way was its country neighbor to the north.

Grambling, known for decades as The Icon of Black College Football, was a Tiger trying to find its new stripes. Robinson was college football’s all-time winningest coach, and a beloved figure in Grambling and around the world, but after five loses to Southern, many folks thought it was probably past time to go when he stepped down after the 1997.

In his stead was one of his prized pupils, one of Grambling’s favorite sons in Douglas Williams. Williams had been the quarterback at the very first Bayou Classic in 1974, and went on to get votes for the Heisman as a black quarterback at a black college in the late 1970s, which tells you how good he was. Best known for winning the MVP in Super Bowl XXI, Williams played in the league for three decades before hanging up his cleates.

After serving one season as head coach at Morehouse College, the understudy was called up to the big leagues to take over for his legendary mentor. The Grambling program he inherited prior to the 1998 season was one that hadn’t had a winning season since 1994. Three losing seasons might not sound like a big deal at many HBCUs, but it was an eternity at Grambling.

Williams wasn’t able to stop the streak from extending in 1998, as the team went 5-6, including a 26-14 loss to the Jaguars in that season’s classic. But his team lead 14-3 at halftime before Southern came on like the Lousiana sun on a hot summer’s day and kept Richardson’s streak going. The Tigers headed in the 1999 game 7-3 overall, putting the streak of losing seasons to bed. Not only that, a win against the Jaguars would put the Tigers in the championship game.

Grambling’s offense was led by Lionel Hayes, a senior who started his career in Baton Rouge with Southern. The 6’4, 225 pound quarterback filled in the role of Grambling’s big gun that Williams thrived in a quarter century prior. His top target was sophomore receiver Scotty Anderson, who was the next a long-line of great Grambling pass catchers going from Charlie Joiner to Jake Reed.

Linebacker Channing Warner was the quarterback of Southern’s defense, known as “Dog Day” for its ability to sack quarterbacks almost at will and sniff out opposing running backs. It came into the game with 39 sacks and 18 interceptions while allowing opponents to complete just 44 percent of its passes. Defensive lineman DaMarcus Miller led a ferocious defensive line at nose tackle.

One For The Ages

On Saturday afternoon a crowd of 67, 641 fans slowly made its way into the Lousisana Superdome.

Just like the previous season, Grambling jumped out in front, going up 13-0 in the first quarter as Southern turned the ball over twice in the game’s opening minutes. Southern broke into the scoreboard with a 24 yard field goal early in the second quarter, but the first half belonged to GSU who got three touchdown passes from Hayes, two to Randy Hymes and one to Levi Washington. By the time the Human Jukebox and The World Famed took to the field, Grambling led 31-10 and looked like its dreaded losing streak was 30 minutes from coming to an end.

But just like the 1998 Classic, Southern would show why it was a championship-level squad. It started, coincidently, with the loss of starting quarterback Troy Williams. Williams was slung to the turf by the facemask via GSU defensive back Michael Grant. He would be carted off the field. He would be replaced by Terrance Levy.

Southern responded to Williams’ departure with a seven-yard run by Lewis that slashed the deficit to 31-17 with 6:19 left in the third quarter. Levy came up big early in the fourth quarter, throwing two critical touchdown passes that tied the game with 13:43 left in the fourth quarter. He would leave the game too, briefly, after having his chin busted, but he returned to lead two drives that resulted in Mattingly field goals in the last five minutes to give SU the lead and the win.

“We came out and played ball for the next 30 minutes and it turned out good for us. I was overwhelmed by all the excitement,” Levy said after the game. “I just got on my knees and asked God for help. And we came up big.”

The win gave Southern the first ever SWAC West division title, and set up a matchup against a high-powered JSU team that featured two first round NFL Draft picks in the inagural SWAC Championship Game. Southern would win the game and three-peat, but it didn’t take a genius to see that Grambling was back and that the rivalry would no-longer be one-sided.

“Pete Richardson, don’t look back now, Doug Williams is gaining on you,” wrote Nakia Hogan of the Shrevport Times.

Hogan was right. Grambling would go on to win three-straight titles of its own under Williams, starting in 2000. The dynasty would be reborn, and twenty years later the game remains one of the rivalry’s seminal moments.