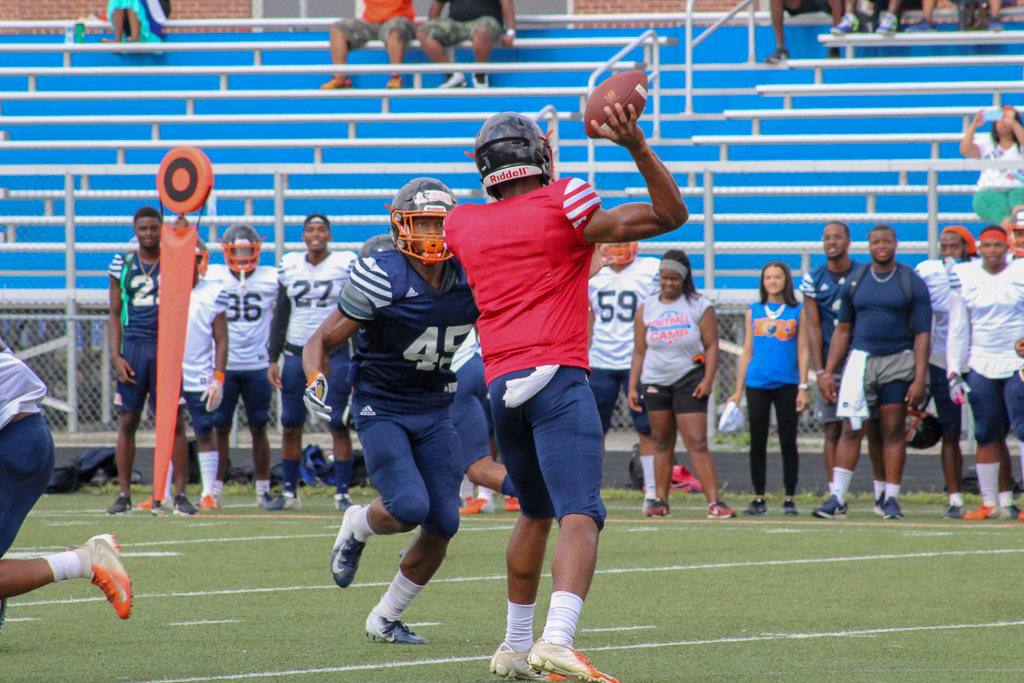 Football season is here and Morgan State is looking to make a bigger impact this season. After a big upset against North Carolina A&T last season, the Bears failed to capitalize after the win in MEAC play. Another coaching change occurred and now former University of Michigan star, Tyrone Wheatley is leading the Bears.

Stripped of a spring game, due to NCAA sanctions from last season, Wheatley’s team scrimmaged on Saturday. Here are some takeaways from the game.

Quarterback Battle is still in the air

Wheatley has some big decisions to make and changes to pursue. One of those decisions is the current quarterback situation.

Deandre Harris started most games for the Bears last season. But an injury gave way to DJ Golatt. In the last four games of the season, Golatt scored eight touchdowns. His last time out included over 300 yards of total offense against Norfolk State. Despite that, Harris is a senior and has more experience within the program.

So this creates an interesting dynamic. You have Golatt who can put a spark in the offense but Harris who is more experienced. And after Saturday’s scrimmage, it’s hard to tell who will be starting. Both QB’s made some good plays but struggled as well. The decision of who’s starting will set the tone for Morgan’s season.

Morgan’s defense is loaded once again

The Bears defense ranked highly in many categories within the MEAC and FCS last season. Senior linebackers Rico Kennedy and Ian McBorrough are leading the strongest point of the Bears team right now. And despite being split for this game, both defenses had their way in the scrimmage today. There was a lot of hard-hitting and wasn’t a lot of explosive plays allowed.

Expect for this group to rank highly once again and cause havoc within MEAC play.

Backfield depth will be key to offensive success

The playcalling seems more open from what spectators saw today. Due to this, there are more ways for the RB group to gain yardage on the ground. With a question mark at QB right now, the running back play will help start things up for the revamped Morgan offense. And with Wheatley’s experience at RB, the group will have alot of support.

The biggest question mark on the board right now is the QB situation. Besides that, the Bears looks like a more organized team. On the field, there were fewer penalties and mental mistakes from last season. Outside of that, the program will be returning to a new turf field and stadium upgrades.

Coach Wheatley’s team will start the season at Bowling Green, James Madison, and Army. All games which should be good tests. The on-field results will say it the most but right now, the Bears are headed in the right direction.