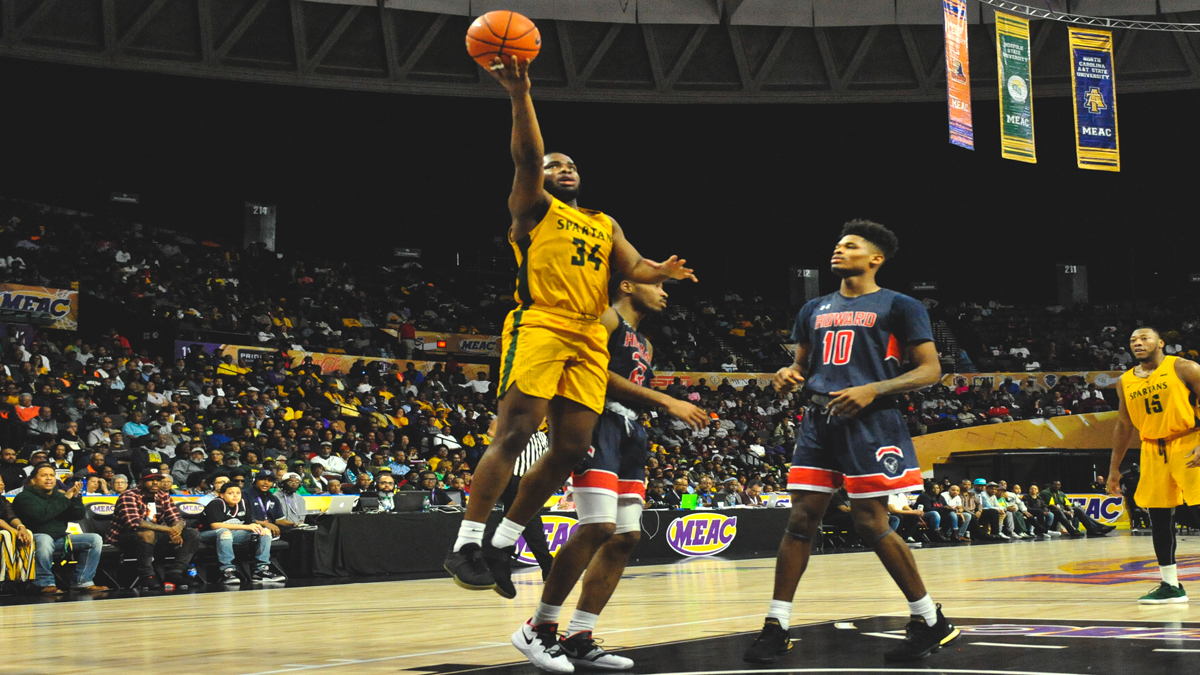 Will be on the road for the majority of the 2019-20 season, including the Battle of The Bay vs. Hampton.

NORFOLK, Va. – The Norfolk State men’s basketball program released its 2019-20 schedule on Wednesday, highlighted by three home games in the early part of the season. The Spartans will be road warriors for nearly a month and a half in non-conference play and will also end the season with four of five games on the road.

Altogether, NSU will have 12 home games, eight MEAC, among its 31 games on the year. Included in there are a pair of tournaments in which the Spartans find themselves in New Jersey.

Norfolk State begins the year with three home contests in a four-game span. The Spartans will also have three straight home games twice during MEAC play.

“Scheduling games this year was tough due to last season’s success, but I think we were able to put together an exciting slate of games,” said head coach Robert Jones. “We will be tested early and often. With a lot of newcomers, we hope we can successfully navigate thru the non-conference portion to get ready for an exciting MEAC schedule.”

It all starts with a home matchup against Greensboro College at 8 p.m. on Nov. 5, the earliest start to the season ever for NSU. The Spartans will also host Penn State Wilkes Barre on Nov. 8 at 7 p.m. and The Apprentice School on Nov. 14 at 8 p.m. In between, they travel to Ole Miss on Nov. 12.

But only one of the next 11 games is at home, that taking place on Dec. 1 against Niagara at 4 p.m. The end of November finds NSU at Bradley (Nov. 19) and Northwestern (Nov. 22) for the Fort Myers Tip-Off Tournament. The Spartans complete their portion of the tournament Nov. 26 and 27 up in New Jersey with two games against opponents to be determined.

“We will definitely be tested early on. Bradley and Ole Miss were NCAA teams, and anytime you play an SEC team like Ole Miss it is going to be a challenge,” said Jones. “Same with Northwestern, as all Big 10 teams test your physicality. Even Penn State Wilkes Barre won a national championship on the USCAA level, and anytime a team wins a championship that will be a tough outing as well.

“Then potentially going against solid mid-majors in Monmouth and Radford, that will give us a quick taste of where we are as a program as our newcomers get their feet wet. We look forward to that challenge with a championship on the line.”

NSU also has six straight contests on the road following the game against Niagara. It starts first with Southern Illinois on Dec. 4, followed by a women’s-men’s doubleheader at Hampton on Dec. 7. NSU makes a trip back to Loyola Chicago for the fourth straight year on Dec. 15, and NSU also heads to Stony Brook on Dec. 29 to close out non-conference play.

The Spartans compete in the Boardwalk Battle at Jim Whelan Boardwalk Hall in Atlantic City on Dec. 20 and 21, taking on Bowling Green the first day and either Drexel or Quinnipiac on the second.

“This will be one of the highlights of our early season schedule,” stated Jones. “Taking on those programs in a famous place like Atlantic City, it is another big test with again a title on the line. Continuing series with Niagara, Loyola and Stony Brook, these are programs with tremendous coaches and always play us tough.

“We also look forward to the Battle of the Bay after a great game last year. It is of course a fan favorite, but Hampton should be very good next year too.”

NSU starts MEAC play at home against Bethune-Cookman on Jan. 4, but the next two games at Coppin State (Jan. 6) and Howard (Jan. 11) are on the road. The Spartans do close out the month back at home, against Maryland Eastern Shore on Jan. 18, South Carolina State on Jan. 25 and Florida A&M on Jan. 27.

After a weekend trip to North Carolina A&T (Feb. 1) and North Carolina Central (Feb. 3), the Spartans have another three-game home stretch. It starts on Feb. 8 against Delaware State, followed by a weekend of Feb. 15 versus Morgan State and Feb. 17 against Coppin State.

“It will be an exciting MEAC schedule with a lot of new coaches, players and playing styles this year,” added Jones. “Once again, 11 dogs chasing one bone always makes for great entertainment.”

Of those eight home games, only one takes place within the last five contests of the regular season. NSU begins the closing stretch with a trip to the Sunshine State (Florida A&M on Feb. 22, Bethune-Cookman on Feb. 24). NSU’s last home game is Feb. 29 against Howard, while the last two games of the regular season take place at Delaware State on March 2 and at Morgan State on March 5.

The MEAC tournament will run from March 9-14 at Norfolk Scope Arena for the eighth straight year.

NSU is coming off a 22-14 campaign in 2018-19, including the MEAC regular season title at 14-2. The Spartans upset No. 1 seed Alabama in the NIT to advance to the second round of the tournament. NSU must replace eight of the 12 players who competed last year.