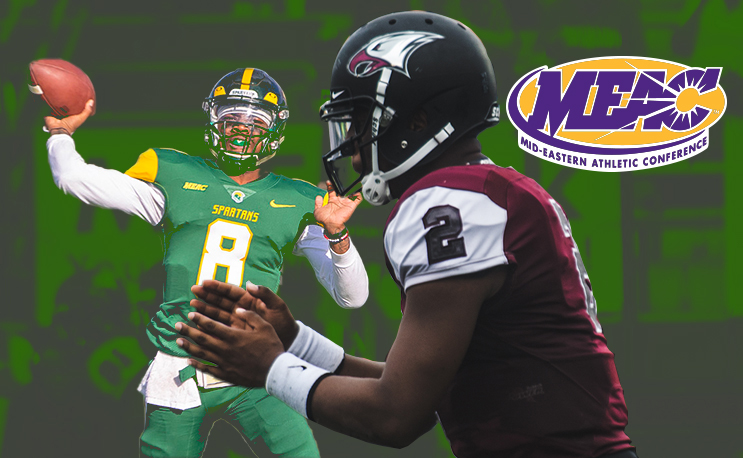 Pootie Carter and Chauncey Caldwell have had big moments in their first two seasons. Both will look to move up the MEAC ranks in 2019.

HBCU Gameday is looking forward to the 2019 season with our top five skill positions in the MEAC, SWAC and D2 HBCU Football.

Today’s feature highlights our fifth-best MEAC QB: A tie between Norfolk State’s Pootie Carter and NCCU’s Chauncey Caldwell. Come back for more as we continue our countdown!

Offense has been Norfolk State’s achillies heel for most of the last decade, and coach Latrell Scott and Co. would definitely love to change that narrative. Much of the charge for that will go to the young man they call Pootie.

The Highland Springs (VA) native has had some high moments in his career already. As a freshman he went into O’Kelly-Riddick Stadium and ended NCCU’s MEAC winning streak. Last season he was named MEAC Offensive Player of The Week after a big game against Delaware State. Then he went through a three-game spell where he threw seven interceptions and no touchdowns.

Both Good Pootie and Bad Pootie showed up last season. To counteract that stretch he had three games in which he threw for three touchdowns or better and he absolutely TORCHED Morgan State with 467 yards passing while completing 64 percent of his passes. If THAT Pootie shows up more often in 2019, the MEAC will be forced to take notice.

It’s hard stepping into the shoes of a quarterback who led his team to three-straight conference titles (Malcolm Bell), but that’s what Chauncey Caldwell has been asked to do in Durham. After a strong freshman campaign, Caldwell had a solid sophomore season before an injury slowed him down. He threw for eight touchdowns and just one interception on the season.

His best game came against Howard were he out-played Caylin Newton and willed his team to a victory while compiling 464 yards of total offense and four scores. Unfortunately, he injured his foot against Delaware State on Oct. 27, putting an end to his sophomore campaign.

Caldwell will be under a new coaching staff heading into his junior year as Trei Oliver takes the reigns of his program. The offense will be ran by Moses Ware, the man who helped Amir Hall tear up the CIAA and win back to back HBCU Gameday Offensive Player of The Year Awards. With his experience and Caldwell’s ability and athleticism, he could be an All-MEAC quarterback by the end of the season.

The freshman had a solid rookie campaign after getting playing time late in the year, throwing for six touchdowns to just four interceptions.