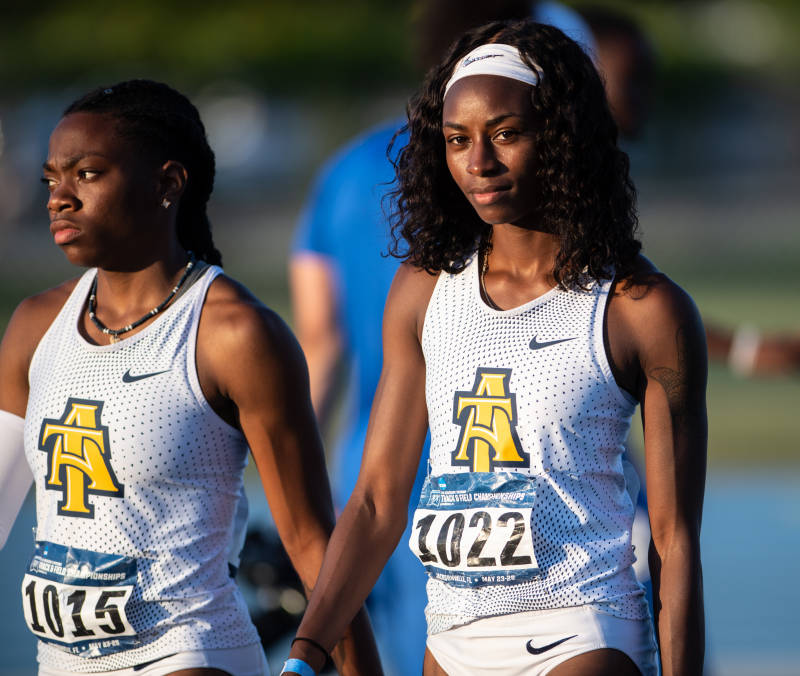 White will compete for three national championships on Saturday

AUSTIN, TEXAS – Day two is finally completed at the 2019 NCAA Outdoor Track and Field Championships at the University of Texas’ Mike A. Myers Stadium on Thursday. After numerous delays because of threatening inclement weather, the North Carolina A&T women’s track and field team will participate in three different NCAA finals that will determine the 2019 national champion in that particular event.

Senior Kayla White will compete in three finals on Saturday with the 100 meters looking like her best chance at grabbing another NCAA national championship. White, won the indoor national title in the 200m in March, ran 11.01 to finish second in the 100 with a time of 11.01.

It was five-tenths off her record-setting 10.96 she ran at the 2019 Mid-Eastern Athletic Conference (MEAC) Outdoor Track and Field Championships in May. White finished just two-tenths of a second behind LSU’s Sha’ Carri Richardson (10.99). The 100m final is at 7:22 p.m., Saturday.

White will have another first-team All-American etched on her resume while freshman teammate Cambrea Sturgis will come away with second-team All-American recognition in the women’s 100m after finishing 11thin 11.22.

In the 200m, Sturgis had the edge. Sturgis and White qualified for the 200m final scheduled for Saturday at 8:07 p.m., EST with Sturgis finishing third in the semifinal qualifier with a time of 22.510. White finished seventh in 22.648. Both sprinters are first-team All-Americans in the event.

Sturgis put together a personal record in the 200 on Thursday barely outrunning the 22.52 she ran at the 2019 NCAA Division I East Preliminary Round two weeks ago. The 200m was tremendously fast. White at the fastest time in the nation coming in (22.52), but Southern Cal’s Anglerne Annelus ran a 22.35 to finish first in the semis. LSU’s Richardson ran a 22.37 to finish second.

Both Aggie Aggie ladies will also compete in the 4×100 meter relay final on Saturday at 6:32 p.m. They will be joined by freshman Kamaya Debose-Epps and junior Tori Ray. Together the foursome ran a 42.95 to finish fifth in the semis.

There was another second-team All-American recognition for N.C. A&T. Ray finished 14thin the 400m in 53.15. Junior Madeleine Akobundu also competed on Thursday finishing 17thin the 100-meter hurdles in 13.20.