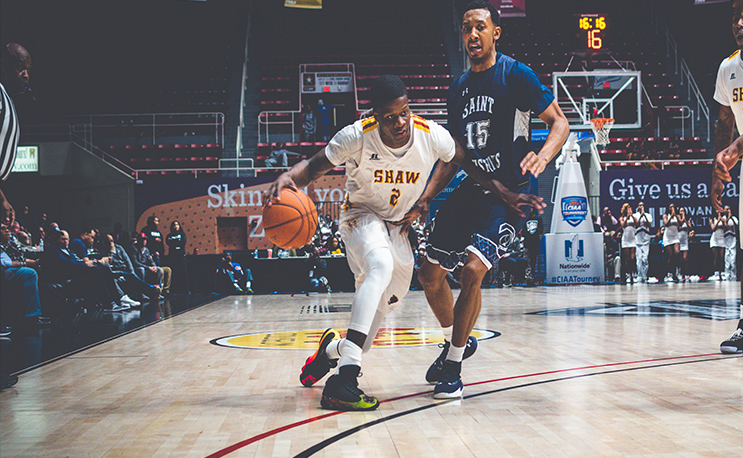 HBCU players don’t get picked in the NBA Draft. Neither do Division II players. Shaw’s Amir Hinton is both, and he is getting his shot.

The NBA Draft is just a month away and one of the hottest names is one that is new to many fans, but not fans of HBCU Gameday.

Shaw’s Amir Hinton has spent the last month traveling across the country working out for NBA teams ahead of the draft. His most recent workout was for Sacramento Kings and he spoke to the media about trying to make the most of his opportunity.

Hinton has previously worked out for several teams, including the Atlanta Hawks, Dallas Mavericks, Detroit Pistons and several others.

“I’m obviously not this big Division I prospect,” Hinton told reporters. “I’m from a D2 school so I gotta do everything with a chip on my shoulder.”

Hinton played his first two seasons at Lock Haven (PA) before transferring to Shaw before last season. He led Division II in scoring his lone season in Raleigh, averaging 29.4 ppg, just under five rebounds and four assists. He also came up with 2.3 steals per game while shooting 49 percent. He helped Shaw to the CIAA Championship Game.

The 6’5 Philadelphia native is not only working out against other prospects; he’s also fighting recent history that says HBCU and Division II players don’t get drafted. The last HBCU player to be picked was Norfolk State’s Kyle O’Quinn in 2012. No Division II player has been picked since Robert Whaley back in 2005. And no player from the CIAA has been picked since the Seattle Supersonics picked David Young from North Carolina Central.

Shaw hasn’t had a draft pick since Ronald “Flip” Murray was selected in the second round back in 2002.

“We talk to each other here and there. I might call him and tell him to give me some advice on what he did when he was coming out and how to approach certain situations going to these teams,” Hinton said of Murray. “And he just told me to keep going, keep putting in the work.”