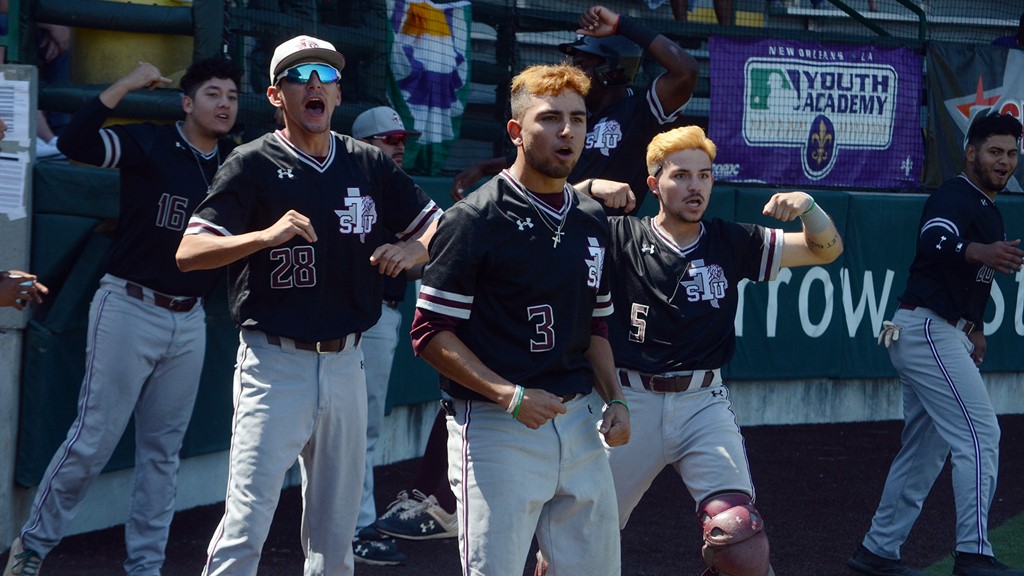 The SWAC Tournament starts off with an extra innings thriller

NEW ORLEANS – A fast start propelled West No. 2 seed Grambling State to a 14-4 win over East No. 3 Alcorn State in the opening contest of the 2019 Southwestern Athletic Conference Baseball Tournament Wednesday morning at Wesley Barrow Stadium.

The Tigers batted around in the first inning, as Alcorn State starter Carlos Lopez was off the mark early. After Richard Ortiz hit an RBI double to start the scoring, Grambling State picked up a pair of runs via bases-loaded walks and added another with an Ian Bailey RBI sacrifice fly.

Warren Laster slapped a two-run double to cap another four-run inning in the second for the Tigers, but Alcorn State got one back as Jordan McGowan – who started the frame with a walk – scored on a dropped fly to right.

Jahmoi Percival added to the Tigers’ lead in the bottom of the fourth with a solo shot to right, but Alcorn State scrapped together a run in the fifth thanks to an RBI single from Kirt Cormier and a pair in the top of the seventh due to errors.

Grambling State continued to maintain control, tacking on three runs as Isiah Torres led off the inning with a triple, later scoring on a wild pitch. Garrett Smith followed with a RBI single, and Laster brought home a run with a RBI sacrifice fly.

Alcorn State started to rally, loading the bases in the top of the eighth, but a quick snag of a would-be line drive by Trevin Bolden resulted in an frame-ending double play. Bolden went on to force the mercy rule with a RBI sacrifice fly in the bottom of the inning.

Key Stats
– Richard Ortiz was 2-for-4 with a pair of runs for Grambling State. Smith went 2-for-3, driving in three runs, and Laster accounted for four RBIs.
– Jason Alvarez got the complete game win, striking out eight and scattering nine hits while throwing 126 pitches.
– Tristin Garcia led Alcorn State with a pair of hits.
– Alcorn State’s pitching staff issued 15 walks in the game.

NEW ORLEANS – Oscar Ponce’s go-ahead single in the top of the 10th was the difference for Texas Southern during a 5-4 win over Jackson State Wednesday afternoon during the 2019 SWAC Baseball Tournament.

Trailing 4-2 following a two-run home run by Jackson State’s Raul Hernandez in the bottom of the sixth, Texas Southern jumped on the comeback trail with three straight base hits to open the ninth inning, the last one an RBI single by Victor Cruz. Texas Southern eventually tied it on an RBI groundout by Chris Suarez. After a lead-off double in the bottom of the ninth by Jackson State’s Rahman Williams, a throwing error allowed runners at the corners. From there, Jackson State loaded the bases but TSU starter Aron Solis worked out of the jam to send it to extra innings.

In the top of the 10th, O.J. Oloruntimilehin hit a one-out double to give TSU a chance, where Ponce scored him with a single to centerfield.

From that point, Solis retired the side to push the defending champions to the winner’s bracket.

With the game knotted 1-1 after four, the defending champions took the lead in the top of the fifth. There, JSU starter Nikelle Galatas lost command of the strike zone to the tune of three walks, the last one issued with the bases loaded, allowing Nic Garza to score. Mario Lopez came on in relief and forced Oloruntimilehin to ground into an inning-ending double play.

Jackson State threatened in the bottom of the sixth after back-to-back singles by Prentiss and Smith put runners at the corners for Williams. After Prentiss scored on a balk by TSU’s Aron Solis, Raul Hernandez blasted a two-run home run over the left field wall to make it 4-2, a margin that held until Texas Southern’s 10th-inning rally.

Key Stats
– Tyson Thompson led TSU with three hits, while Garza was 3-for-3 with three runs scored.
– Prentiss was 2-for-3 with a pair of runs, and Smith went 2-for-3 as well for Jackson State.
– Solis threw 140 pitches, allowing 10 hits and striking out six.
– The teams left a combined 17 runners on base.

NEW ORLEANS – Alabama State cruised through to the winner’s bracket with an 11-4 victory over Prairie View A&M Wednesday evening during the 2019 SWAC Baseball Tournament.

The Hornets wasted no time getting on the board as Yamil Pagan led off the bottom of the first with a single. After Noel Cheneau reached via error, Santiago Garcia singled to score Pagan. After Cheneau scored on a RBI sacrifice fly, Christopher DeGuzman scored a pair of Hornets on a single through the right side.

After Alabama State put up another run in the bottom of the third, Prairie View A&M’s Dalton Horner took a Darren Kelly offering over the left-center wall to get the Panthers in the score column.

Prairie View A&M pushed another across home plate when Demarie’ Smith led off the inning with a triple, later scoring on a RBI sacrifice fly by Daniel Lingua. However, miscues by the Panthers’ defense gifted Alabama State three runs in the bottom of the sixth.

The Panthers’ offense continued to fight, coming alive with two outs in the top of the seventh after Andrew Garcia drew a walk and Smith singled him into scoring position. Lingua brought A. Garcia home with a RBI single, later stealing second. Tyler Gordon scored Smith on a single, but Lingua was thrown out trying to stretch the play to third, ending the potential rally.

Alabama State’s Cameron Hearn led off the bottom of the frame with a triple, and Chris Lewis followed with a RBI single. After a bases-loaded walk increased the Hornets’ lead to six. Alabama State added one more run for insurance and shut down the Panthers’ bats from there.

Key Stats
– Alabama State left 11 runners on base.
– Hearn went 3-for-5 with two runs scored for Alabama State, who had eight players with at least one base hit.
– Gordon and Smith each had a pair of hits for PVAMU.
– Darren Kelly struck out eight batters in a complete-game win.

NEW ORLEANS – A late three-run shot by Southern’s Johnny Johnson helped the Jaguars fend off an upset-minded UAPB team by a score of 11-7 Wednesday night during the 2019 SWAC Baseball Tournament.

A wild pitch allowed another UAPB run, and during an inning-ending double play, the Golden Lions plated another run to pull within one. In the bottom of the eighth, Southern’s Tyler LaPorte reached on an error, eventually advancing to third on a wild pitch. After a walk put runners on the corners, Johnson cleared the bases with his home run. From there, Whalen closed it out.

The sides traded runs early before UAPB put together a run in top of the fourth. Jarficur Parker reached on a fielding error during a potential inning-ending play, and Tywan Mackey followed with a single. Parker scored on a Davion White single, and Mackey – who stole third – scored on a Robinson base hit.

The Jaguars rallied in their half of the frame, loading the bases before LaPorte knocked a RBI single to bring Southern within one. Javeyan Williams tied it with a RBI single and an errant pitch struck Wheatley, bringing another Jaguars run home and chasing UAPB starter Race Tittle.

Malik Blaise later turned on a pitch for a solo shot, pushing Southern’s lead to 6-4. The Jaguars continued to apply pressure, as Zavier Moore hit a two-run double to push the advantage to four, where matters stayed until UAPB’s comeback attempt and Southern’s late-game push.

Key Stats
– LaPorte and Blaise each went 2-for-5, scoring a combined five runs
– Whalen maintained his season ERA of 0.00, earning his eighth save of the year.
– Four UAPB players – Nick Kreutzer, Ricardo Sanchez, Robinson and Mackey – had two hits each.
– Eli Finney got the win for Southern, going seven innings and striking out five while allowing nine hits.