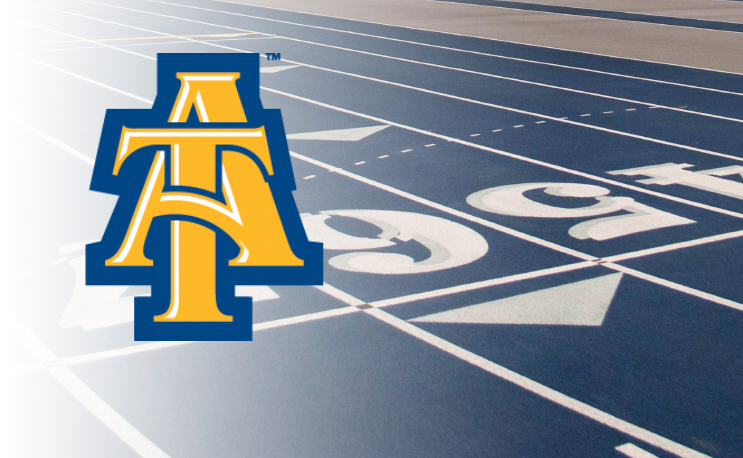 NCAT puts the blue death on the competition for day one of its track meet.

EAST GREENSBORO –North Carolina A&T’s championship track and field team competed at N.C. A&T’s Irwin Belk Track on Friday so the home fans can see just how good they are, and they did not disappoint.

In the women’s 100mh, the Aggies finished first, second and third led by Akobundu who finished in 13.26. Akobundu had the fastest preliminary time on Friday at 13.21. It matched her time at the Florida Relays earlier this season and was two-tenths of a second shy of her personal best. Akobundu came into the weekend ranked 17thnationally in the 100mh.

Junior TeJyrica Robinson finished second (13.37) in the 100mh in front of teammate and freshman Paula Salmon (13.47) in the event. Robinson’s 13.37 is a personal best topping her previous best time of 13.47 ran at last season’s NCAA Division I East Preliminary Round at the University of North Florida.

“It was a great first day for the team,” said Duane Ross, N.C. A&T’s director of track and field programs. “I’m always happiest when my hurdles sweep a meet. Those ladies are tough. The way they stepped up and competed and did it without Kayla was inspiring. It shows that they’re ready to resume our dominance in the hurdles in the years to come.”

Debose-Epps got her second win in the 100 in as many weeks as she crossed the finish line in 11.61. Last week at the Phoenix Invitational hosted by Elon University, Debose-Epps recorded a 100 time of 11.91. Junior Taliyah Townsend finished second in 11.76 while freshman Nilaja Florence finished fourth with a time of 11.82.

Freshman Cambrea Sturgis ran an impressive 11.24 in the 100m prelim but did not compete in the final. Her 11.24 time is her fastest time this season and could land her a top-10 ranking this week.

Rowe and Kimtai ran incredible races for the Aggies. Rowe had an excellent 100m final where he sprinted out quickly and obliterated his personal record by running a 10.10. His previous fastest time was 10.22. Rowe should have a top-5 time in the nation this week. Rowe ran a solid 10.39 in the 100 prelims.

“I’m so proud of Rodney and the way he competes,” said Ross. “He works hard and deserves the results. He’s going to be a serious threat at (NCAA nationals) in both the 100 and 200.”

Meanwhile, Kimtai made a spirited comeback effort in the 800 to win. It looked as if Hampton’s TayvonBurris had a good lead as the runners made the turn for the last 200 meters of the race. But running in third, Kimtai made a push and was able to sustain his sprint as he passed Burris just before the finish line to finish in 1:50.59. Burris finished in 1:50.69.

“Regan is the toughest athlete I’ve ever had the pleasure of being around,” said Ross. “He is totally focused and ready to whatever is needed.”

Kimtai also finished seventh in the men’s javelin with a throw of 138-feet. Akobundu also stepped over and did a field event where she finished fourth in the women’s long jump at 18-feet, 7 ¼-inches.