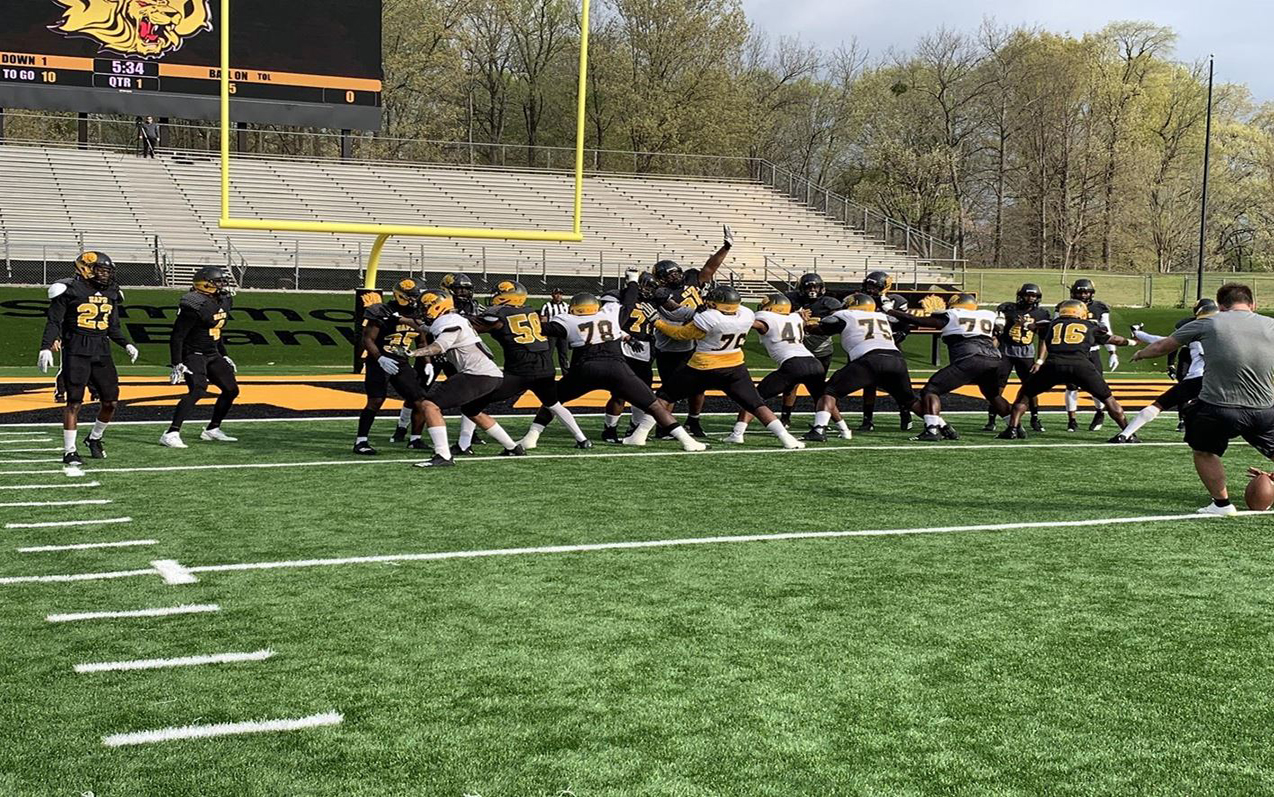 The Golden Lions wrap up the final practice of the offseason

Pine Bluff, Ark. – The University of Arkansas at Pine Bluff Coach Cedric Thomas got what he was looking for out of his team during Friday night’s Black and Gold Spring Football game.

Thomas stressed execution going into the Golden Lions’ final practice of the offseason, and for the most part, UAPB delivered on both sides of the ball in front of several hundred fans at Simmons Bank Field.

“The kids came out and executed like we hoped,” the second-year coach said. “We put a good product out there, and the kids were flying to the ball.  And then, we had great participation from the community and the campus.  We had a nice crowd, and everything was just awesome.”

The Black team, which was essentially the Golden Lions’ defense, held off a late charge from the Gold to win 33-28, but that was somewhat of an afterthought. Thomas got a chance to see just how much progress his team has made since its 2018 season ended nearly five months ago.  UAPB staggered to a 2-9 finish, but the Golden Lions finished the year on a high note by beating Texas Southern 15-10 on the road in their season finale.  UAPB carried the momentum generated from that victory over into the spring, and it got the second-year coach excited about where his team stands.

“We feel good about where we are, especially on the offensive line,” Thomas said. “We’ve got four of those guys returning, but the right tackle spot was kind of back and forth with some guys this spring, kind of chairs. But we feel like we’re in a good spot there. Every good team’s foundation starts with the offensive line, and we like what we’ve seen.”

The offensive line helped the Golden Lions finish third in the Southwestern Athletic Conference in total offense, and they showed flashes of that same top-tier form Friday by opening open holes for running back to run through and developing clear passing lanes for the quarterbacks.

“It’s a blessing to have two really good quarterbacks,” Thomas said. “This is Shannon’s second go-round in the spring, even though he didn’t play many games during the season. And then, this is Skyler’s first spring, but the kid started 8-9 games last year.

“The coaches are doing a great job of letting those guys call some things at the line of scrimmage, and they’re showing a great deal of leadership. For us, it’s a good problem to have.”

Freshman running back Omar Allen also made a splash on offense with a 12-yard touchdown run.

However, the Black team did have its moments as well.  They were awarded three points for every three-and-out they had and seven points for either a turnover or a turnover on downs. The unit made enough plays to build a 30-14 lead late in the second half and make it stand.

The Golden Lions won’t return to the field until fall workouts in a little over three months, but for Thomas, the process never stops.

“We’ve got to continue to maintain and cultivate this culture,” he said. “It starts in the classroom and finishing up the right way there.  Then get in the weight room and continue to transform this thing.  We like where we’re are, and we’re about to turn this thing around.”