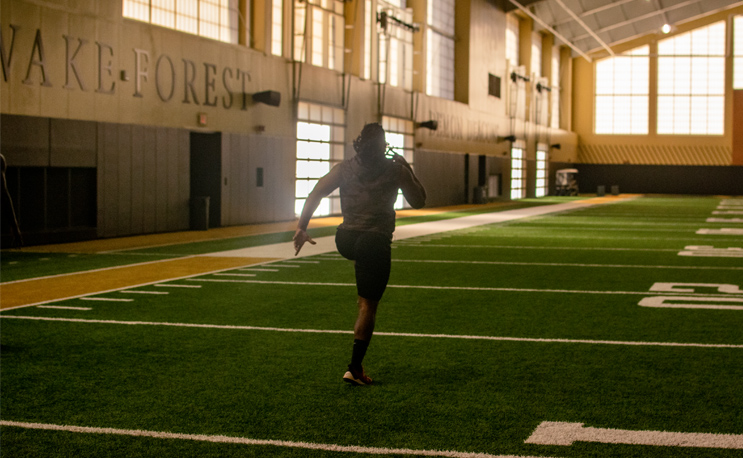 Wake Forest and Winston-Salem State a quick ride away from each other on Highway 52. Just 5.5 miles separate the two schools, one a private white institution in a Power Five conference, the other a Division II public historically black university.

So instead of trying to convince pro scouts to make two trips to the moderately sized former tobacco oasis, players at WSSU go up the road to show scouts what they have.

Three former WSSU stars showed up and showed out for NFL scouts on the other side of Highway 52, hoping to put themselves on the radar of NFL scouts that haven’t watched a lot of Division II HBCU football.

“We would love to get around to having our own pro day, without having to ask to go over to somebody else’s house. But we knew that most of the scouts were gonna be like they are every year,” WSSU head coach Kienus Boulware said.

Making The Most of A Chance

Patrick Green ran a 4.5 40 yard dash (unofficially), a great time for a linebacker. The former North Forsyth star was an All-CIAA selection as a redshirt senior after starting his career at East Carolina. He also placed a solid 9.9 on his broad jump.

Running back Kerrion Moore in the 4.4-4.5 range, while showing off a vertical leap of 31 inches. He also put up 16 bench press reps of 225, and that was after his hand slipped seven reps into his first set. He was also impressive in pass catching drills before a slight hamstring pull ended his day.

Moore took the semester off from grad school to prepare for what he hopes will be a career in football.

“You’re waking up early in the morning, making sure you eat. Training an hour or two,” Moore said of his training regiment. “The first couple weeks were crazy but once you get comfortable, you start to get in the rhythm of things.”

Defensive tackle Tyron Roberts had a stellar day, showing off both his strength and speed. The 6’3, 300 pounder put up 30 reps on the bench press, which would have placed him near the top five of all players at last month’s NFL Combine. He clocked in at 5 seconds on the 4 yard dash and showed off a 29 inch vertical leap.

He’s big. He’s physical. He’s a workaholic. There’s been weekends when I’ll drive by and I’ll look by and see Tyron out there working out by himself on the field. Every time you hear about somebody going to that next level, it’s always a story behind it. Their drive and motivation that helped them get to where they are.

Roberts said running on the turf at Wake Forest was much different than the grass at WSSU.

“I move way better on this turf, going through position drills,” Roberts said. “It just felt good out here.”

It was an important showcase for all three players, along with the WSSU program. While it has been successful in terms of winning over the last decade, getting players into the NFL has been a bit more difficult. Despite having nine consecutive winning seasons, the longest current streak of any HBCU program, only one WSSU player on any of those teams has appeared in an NFL game. Former linebacker Carlos Fields saw time with the Washington Redskins and San Diego Chargers a few years back

Several players have been invited to tryouts and camps, though. Quarterback Phillip Sims made it to the last cut with the Arizona Cardinals in 2015. Defensive end Alfy Hill had a preseason run with the Eagles the same year as well.

Moore had the most prolific career of the trio in college, running for better than 3,000 yards and 35 touchdowns while being the top target of every defense he faced for his final two seasons. Roberts often found his way into opposing backfields, disrupting run plays and putting pressure on quarterbacks. Green got progressively better during his lone full season in the program after breaking his leg early in the 2017 season.

All three got to show scouts from the majority of NFL teams what their athletic abilities are. The Raiders, Cardinals, Eagles, Dolphins, Patriots, Falcons, Rams and Rams were a few of the scouts on hand who got a chance to see what this trio from the CIAA had that they might like.

A of two colleges in one city

Three days after the WSSU prospects crossed over to North Winston, a reminder of how thin the thread connecting the two schools emerged online. A flier/internet meme stating that a WFU SGA presidential candidate proposed “to build a wall between WSSU and make them pay for it,” surfaced online and caused a lot of contention.

That’s an interesting point as Winston-Salem State (established in 1892) was in town more than half a century before the Reynolds Family imported Wake Forest from the town in Wake County whose name it still bares.

Kal Meir, the young man depicted on the flier, sent me a message on Saturday evening condeming the post and stating he had nothing to do with it.

“The post is rude and offensive and I do not support or approve of it,” he wrote.

Wake Forest is still investigating the source of the post, according to the Winston-Salem Journal. The internet is literally a web of content, so it may take some time to figure it out. But whomever it was and whatever their motivation, it certainly struck a nerve on both sides of Highway 52.

It was an ugly reflection of the current political climate as well as a reminder that many of the attitudes towards HBCUs, and black folks in general. It also showed there is a long way to go towards building bridges in the city and around the world.