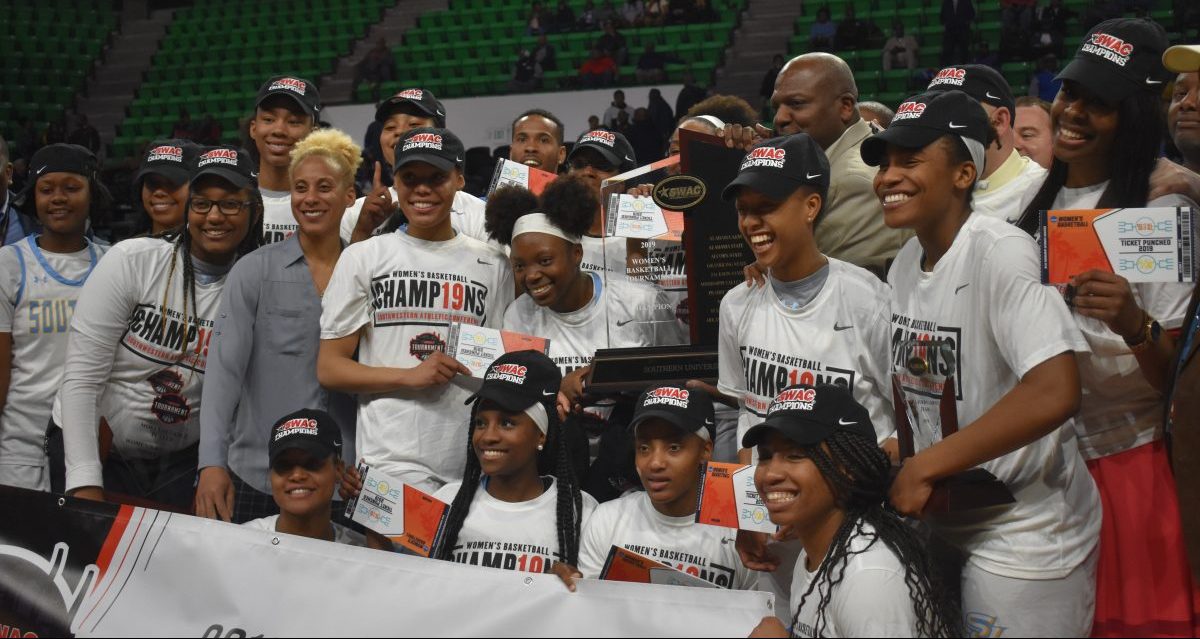 In a game with not very many points, the Southern women’s basketball team managed to hit more baskets than its opponent as the Lady Jaguars defeated Jackson State 45-41 in the 2019 Toyota Southwestern Athletic Conference (SWAC) championship game Saturday afternoon at Bill Harris Arena.

In a game with not very many points, the Southern women’s basketball team managed to hit more baskets than its opponent as the Lady Jaguars defeated Jackson State 45-41 in the 2019 Toyota Southwestern Athletic Conference (SWAC) championship game Saturday afternoon at Bill Harris Arena.

With the win, Southern (20-12) won its first championship since 2010 and first for Lady Jaguars head coach Carlos Funchess. Jackson State – a team that was coming off a double-overtime victory versus Prairie View Friday evening – felt a little fatigued and failed to get in its normal routine of hitting shots and playing defense. The two teams split the regular season series.

Southern finished the game shooting 32.8 percent (20-of-61) from the floor and 50 percent (3-of-6) from the free throw line. Alyric Scott, who was named the 2019 SWAC Tournament Most Valuable Player, led the Lady Jaguars in scoring with 14 points, followed by Courtney Parsons with nine point and Taneara Moore with eight points.

Jackson State (18-14) finished the game 26.9 percent (14-of-52) from the floor, 65 percent (13-of-20) from the charity stripe and failed to convert on a three-point opportunity (0-of-13), something that has normally helped the Lady Tigers down the stretch in games. Marneisha Hamer led all scorers with 17 points, followed by Christina Ellis with 12 points.

Clinging to a 33-30 lead to begin the fourth, JSU came out quickly as Hamer knocked down a free throw and then a jumper to tie the game at 33. However, Skylar O’Bear knocked down a three pointer – her only points in the game – to put SU back up by three, 36-33.

After both teams exchanged baskets and tied the game at 36, the Lady Tigers took a one-point lead with a second free throw from Kaisah Lucky. That lead, however, would not last long as Southern would get into a rhythm that push the Lady Jaguars to their victory in the championship.

Over the next several possessions, Ellis added a couple of free throws for JSU before Rishonti Cowart sealed the victory for Southern with a layup.

In the first quarter, both teams were tied at 4 before Ellis and Lucky converted on scoring opportunities as JSU lead 10-6 going into the second quarter.

In the second quarter, things would begin to favor in the way of Southern after a slow start to begin the game. The Lady Jaguars scored the first four points in the quarter before the Lady Tigers earned their first two points off free throws from Sumer Williams.

From there, Southern dominated the quarter and outscored JSU 14-6 and led 20-16 at halftime.

The Lady Jaguars managed to maintain a four to six-point lead throughout the third quarter before Ellis finished on a layup as the Lady Tigers trailed by three going into the final period.

Southern now awaits what team it will play in the 2019 NCAA Tournament.