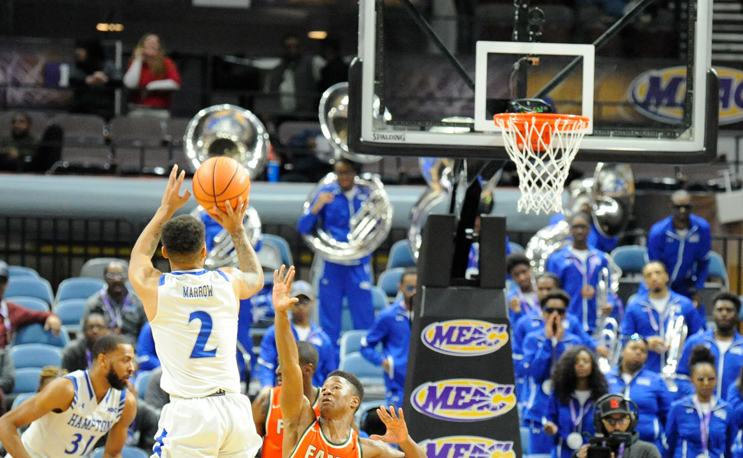 Hampton gets a win in its first-ever Big South Tournament game. Now it will face the task of stopping the top scorer in D1 basketball.

HAMPTON, Va. – Junior Jermaine Marrow scored 28 points and set a school and Big South Tournament single-game record for consecutive free throws made with 16 as eighth-seeded Hampton defeated ninth-seeded Longwood 77-71 in the first round of the Big South Conference Tournament on Tuesday night.

With the win, Hampton (15-15) faces co-regular season champion Campbell on Thursday night at 6 pm in the quarterfinals in Buies Creek, N.C.

Longwood tied the game twice in the final eight minutes, the last being with 4:54 left on a JaShaun Smith jumper for 62-all.  Marrow’s putback 24 seconds later gave Hampton a lead it wouldn’t relinquish.  In those final 4:30, Hampton was 11-for-11 from the line and had one field goal, a 3-point play by Heckstall with 17 seconds left to lead 75-69.

Hampton faces a tall task against Campbell, led by Division I’s leading scorer Chris Clemons. However, HU did hold Clemons to a season-low 14 points in a 64-58 win. Marrow scored 26 in that game.