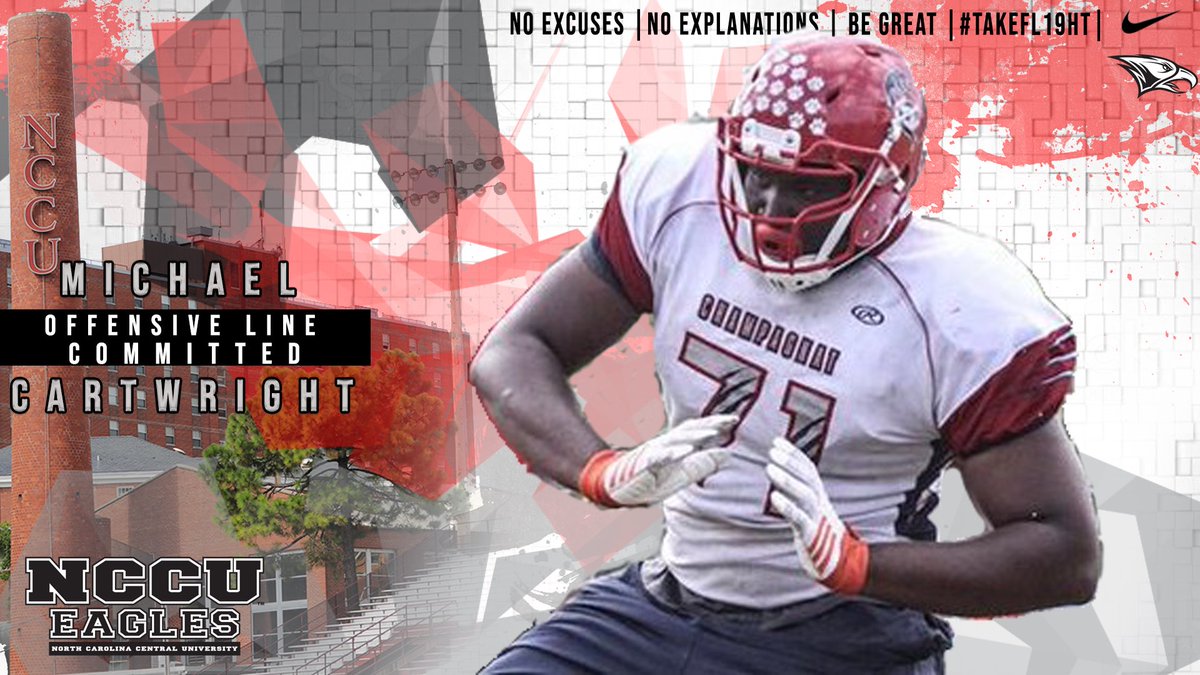 NCCU just landed an offensive tackle that had more than a dozen FBS offers. This talented staff is sure to shake up recruiting.

Michael Cartwright, a three-star lineman out of the Miami area, committed to NCCU on Wednesday. Cartwright initially commited to Indiana and had a total of 15 FBS offers.

Other offers for the 6’5, 295 offensive tackle from Hileah, FL include teams from the ACC along with programs like UCF, Kent State and others. That includes Arkansas-Pine Bluff from the SWAC.

It’s a major get for a new coaching staff in Durham that is quickly making its mark on the recruiting and upending things in the MEAC, SWAC and even the CIAA.

NCCU’s new offensive line coach Lonnie Teasley joined new head coach Trei Oliver’s staff shortly after he was hired. Teasley was at UAPB before coming to Durham, so you don’t have to be an insider to figure out that he factored in heavily in landing Cartwright. A former offensive lineman at Winston-Salem State, Teasley has experience coaching in the NFL and the SWAC, now he’s back in his home state looking to help NCCU get back into the MEAC picture.

Back in December we broke the news that North Carolina Central was hiring Southern defensive coordinator Trei Oliver. On the surface, it was the story of an NCCU alumnus coming home to assume the role of head coach.

Oliver played his college ball at NCCU, coached at Delaware State for a moment and then joined Rod Broadway’s staff in Durham to help the team conquer the CIAA before moving to Division I. He followed Broadway to Grambling and eventually to Greensboro, NC, helping A&T turn into the it is today.

A talented recruiter, Oliver is largely credited with discovering and pushing A&T to offer Tarik Cohen. We know how that changed A&T, the MEAC and HBCU football forever.

Now he’s back in the MEAC at NCCU, which means he’ll now be involved in recruiting against his former collegues, in and out of the state. He also brought a staff with him full of veterans who have coached around HBCU football.

Brian Jenkins is back

Hey MEAC fans, remember Brian Jenkins? It seems like a lifetime ago, but once-upon-a-time, that name ruled from Dover, Delaware to Tallahassee, FL. The former Bethune-Cookman coach is back in the MEAC after a dissappointing Alabama State tenure and a season with Connell Maynor at Alabama A&M. He’ll be listed as special teams coordinator, but you can expect his impact to be felt in recruiting as well. It appears it already is.

NCCU picked up a committment from Davius Richard, a 6’1 quarterback from Belle Glades, FL earlier this week. He had been offered by Alabama State and Delaware State, according to 247Sports.com, as well as Colgate.

Then there’s Moe Ware. Casual fans may not know his name, but he’s spent the last three years tutoring Amir Hall as he re-wrote the CIAA record books at Bowie State. Hall is now a legit NFL prospect, and Ware has returned to his alma mater along with his recruiting contacts in his native Maryland.

Earlier this week, NCCU secured the services of Corey Bullock, an offensive guard from Clinton, MD.

NCCU has definitely been active in the offseason. Only time will tell how fruitful the efforts will be, but when you put together the man who pushed for Tarik Cohen, a mentor to Amir Hall and a coach that ran the MEAC, it definitely looks promising.