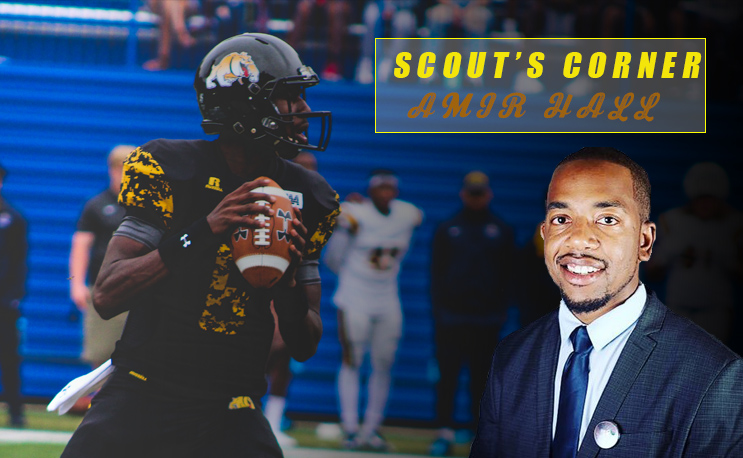 No quarterback from an HBCU has been picked in the NFL Draft since 2006. Bowie State’s Amir Hall should change that.

Bowie State Quarterback Amir Hall has achieved plenty during his college career, including leading the way to the 2018 CIAA Championship. The accolades for Hall’s decorated career have been capped off by a senior season in which he broke CIAA All-Time records for both passing yards and touchdowns and was named both the CIAA and HBCU Gameday/Protect Your Skull National Offensive Player of The Year.

Hard work pays off, as Hall was invited to participate in the NFLPA Collegiate Bowl in January. The black college football world will be rooting for Hall to succeed at the next level. Here is the full report on Hall and why he deserves to be the first Bowie State player ever drafted and the first from an HBCU since 2006.

Measurables: At 6’4 195 pounds, Hall has ideal measurable  for a quarterback, with great ability to see over the pocket. Hall has big hands, and trimmed his four fumbles of the 2017 season in half last season.

Quarterback IQ: Hall is a thinking-man’s quarterback, he’s very aware of what the play is and what his reads should be. Very often, he will take what the defense gives him, but he will take chances occasionally. Hall is a smart quarterback that knows how to manage the game, and has no problem checking down. The problem is, that occasionally Hall will lock onto a check down route and throw a lazy ball.

Reading The Field: As aforementioned, Hall is very aware of where the ball needs to go and what the down situation is. Hall has a good ability to read the safeties and hit tight windows to put his receivers in position to create big chunk plays. The discrepancy comes when Hall has to adapt to NFL speed and go through his progressions faster.

Pocket Presence: Let it be known that Hall is not a run-first quarterback, and he’s decreased his scrambles to showcase that. After rushing for 17 touchdowns on 194 carries over the last two seasons, Hall took off just 72 times in 2018. As Hall goes through his reads, his feet are continuously moving and his head is always on the swivel. He has a good feel for pressure, and has good hip technique to roll out the pocket. Regardless of the situation, Hall is consistent in keeping his eyes downfield. In 2018, Hall completed a career high 66.7 percent of his passes, with many being on the run.

Mechanics: Hall’s game is smooth, and for the most part so are his throwing motions. Especially on short to intermediate throws, Hall manages to get the ball out quickly with some sting on it to the intended target. In terms of the deep ball, Hall has a strong arm and fluid motion on his downfield spirals, but at times he can get happy and push the ball rather than throw it.

Mobility: As I said, Hall has worked hard to prove he isn’t the stereotypical black quarterback that relies more on his legs than his arms. But he can take off, and he will if necessary or he sees an opening. Hall has good straight line speed, and he has flashed the ability to be somewhat elusive for his size. With just two fumbles on the season, Hall has demonstrated that he can be trusted with the ball.

Overview: The 2019 NFL Quarterback Class is considerably weak in the eyes of many experts. Oregon quarterback Justin Herbert is returning to school, and Ohio State quarterback Dwayne Haskins is on the fence, despite being a perennial Top-5 pick. Oklahoma quarterback Kyler Murray already has contract waiting for him with the Oakland Athletics. This is to Hall’s advantage, as teams in need of a quarterback will be forced to look elsewhere than the aforementioned names.

Hall has received Collegiate Bowl invite, allowing him to compete against some of the top names in college Football. Hall is an efficient passer with the ability to throw on the run and create with his feet. At the very least, he will get a camp invite, but if he’s received an invite to the Collegiate Bowl, he’s surely on someone’s radar.

Keep an eye on the Washington Redskins and Vice President Doug Williams of Grambling State fame to show interest in a black college quarterback of a similar mold to himself.