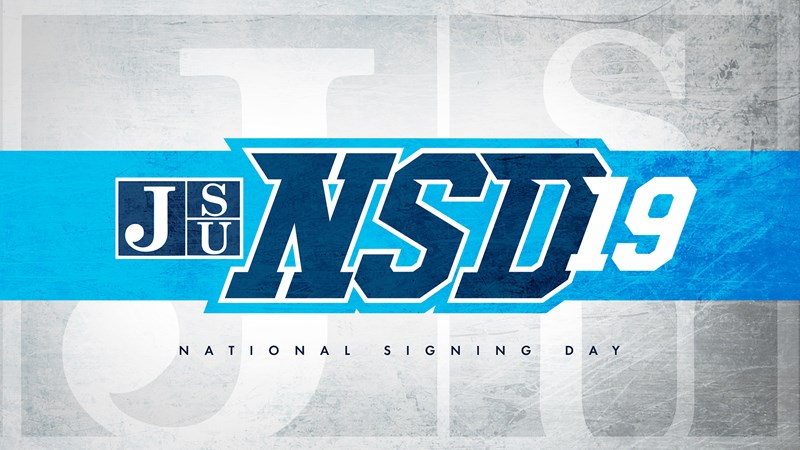 After a strong finish to end the season, the Jackson State football team wasted no time getting to the needs of its team during Early Signing Day Wednesday.

After a strong finish to end the season, the Jackson State football team wasted no time getting to the needs of its team during Early Signing Day Wednesday.

JSU head coach John Hendrick said he was pleased with the early signees for the Tigers.

“We have five quality young men who can come in and make an immediate impact,” Hendrick said.

“They are going to be with us in the spring and will learn how to attend class, properly workout and represent Jackson State University in the proper way.”

The Tigers also lost several offensive linemen from a unit that averaged 117.3 rushing yards per game (7th in the SWAC) and 276.1 yards of total offense (8th in the SWAC).

Raheem Wilson is a 6-3, 305-pound offensive lineman. We expect him to provide a presence up front #TheeILove #BleedTheeBlue pic.twitter.com/sIWW5HX0JW

Wilson helped in a big way on the offensive line at Trinity Valley Community College – an offense that averaged 34 points per game and 410 yards of total offense. Not to mention, TVCC’s offense averaged 193 rushing yards per game.

Williams, who originally signed with the University of Memphis out of high school, is a dynamic running back. As a former running back from White Station High School from 2015-17, Williams finished 2017 among the top-10 leading rushers in Shelby County.

Not to mention, the Memphis, Tenn., native was a Tennessee Sports Writer Association 6A All-State Athlete, All-Region 8-6A first team and The Commercial Appeal Best of Preps All-Metro.

Olenga played one season at Northeast Community College, where recorded 34 tackles, 6.8 tackles for a loss and 3.5 sacks. Born in DR Congo, Olenga originally committed to North Carolina State out of high school and redshirted.

Meanwhile, Scout.com and 247Sports.com ranked Little as a three-star prospect. Little was the No. 2 quarterback out of Illinois. The 6-foot-4, 220-pound Little signed with Western Michigan out of high school and was named the 2015 Player to Watch by Chicago Tribune.

Tiger fans, you’re going to love Matt Little! This cat will be dropping dimes all over the SWAC #TheeILove #BleedTheeBlue pic.twitter.com/4reCmZkXkH

Along with Little, as of now, the Tigers have quarterbacks Derrick Ponder and Jack Strouse on the roster. Ponder, who will be a junior next fall, was the starter at the beginning of 2018 season before Hayes took over as the starting quarterback. Strouse will be a sophomore next year.

We welcome defensive lineman Vincent McIntosh to Jackson State! He’s 6-1, 305 pounds and is expected to make an immediate impact for the Tigers #TheeILove #BleedTheeBlue pic.twitter.com/ursf5QdEPn

McIntosh attended Itawamba Community College in 2018 but did not play due to injury. During his stint at Northeast Community College in his freshman season, the Tupelo, Miss., native played eight games and recorded 24 tackles, three sacks for a loss and averaged 3.3 tackles per game.

The 2019 early signing period will last until Friday while the remainder of the 2019 signing class will be introduced on Feb. 6.