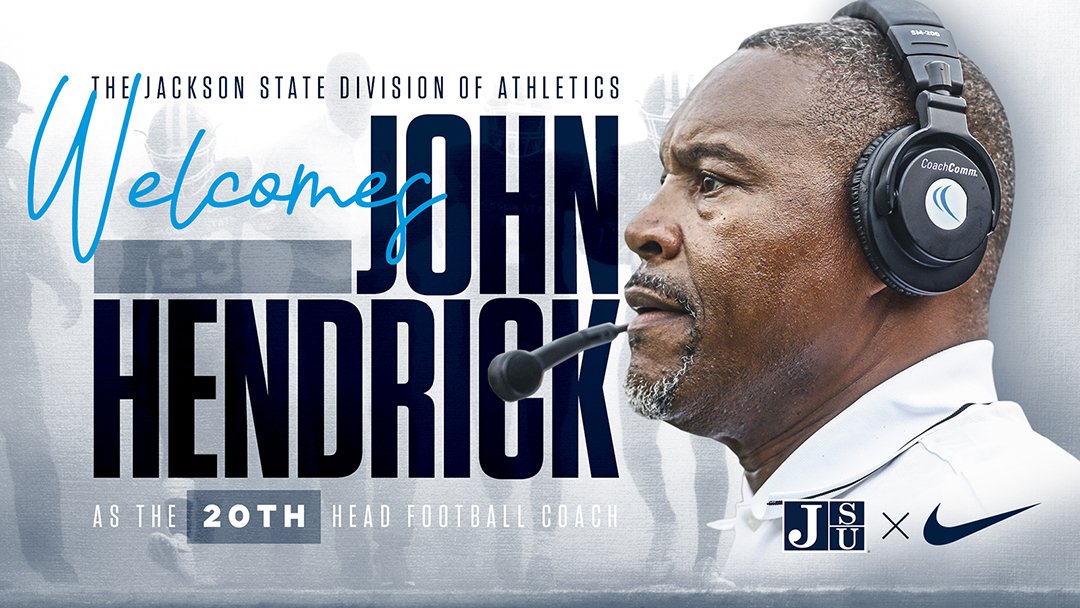 Jackson, Miss. – At one point in the season, Jackson State sat at 3-4 after a disappointing 41-7 loss to Southern University, leading to the firing of then head coach Tony Hughes.

After winning two of its last three games in a convincing manner and keeping the Tigers in contention for a SWAC Championship, JSU hired interim head coach John Hendrick Wednesday evening.

Hendrick will look to build on the success of this year’s team as Jackson State finished 5-5 and 4-3 in conference play.

“John Hendrick is a veteran who has proven his ability to provide the type of leadership that is required for our football program,” said Ashley Robinson, JSU vice president and director of Athletics.

“Coach Hendrick has a vision for his offense. He will hire a proven offensive mind that will install an exciting and up-tempo offense. Fans will enjoy the points lighting up the scoreboard that will remind us all of the glory days. Beyond that, Coach Hendrick is a master-motivator, an experienced play-caller, a great defensive technician and, most importantly, puts the welfare of student-athletes above all else.”

Hendrick was naturally excited about taking over full time for JSU football.

“I would like to thank President (William B.) Bynum and Mr. Robinson for trusting me to lead this legendary football program,” Hendrick said. “Our goals will remain the same: graduate our student-athletes, compete for championships and continue to build this program into a force in the SWAC and the destination HBCU program in the country.”

JSU President Dr. William B. Bynum, Jr. knew after meeting with players that Hendrick had the support of the team.

“I had the pleasure of meeting with our football student-athletes last night along with VP/AD Robinson,” said Dr. Bynum, JSU President. “The players consistently stated that Coach Hendrick is a leader, a father figure, a principled man who brought them together as a team with vision, structure, discipline and tough love. He allowed them to play their game and put them in the best position to succeed on and off the field. These are the attributes that we want in the head coach leading our young men and football program.”

JSU running back Jordan Johnson will play his senior season under Hendrick.

“I can speak for the team and say that we are all excited that Coach Hendrick is our new head coach,” Johnson said. “We have a coach who demands excellence in the classroom and on the field of play. Coach Hendrick is the type of coach who will leave a positive, life-long effect on myself and my teammates.”

Hendrick served as the defensive line coach at Kansas State from 1991 to 1993 and the principles he learned under legendary Wildcats’ head coach Bill Snyder will be used to help shape the JSU football program.

“I am proud of John and of Jackson State for hiring him.  I have a great appreciation for John and his contribution to the development of our program here at Kansas State University,” Snyder said. “John is a knowledgeable and talented football coach.  He works well with and cares about young people and is a strong leader. He will do well there.”

Previously, the coaching veteran spent the 2011 season as special teams/defensive line coach at Tulane after spending the 2008-09 seasons at the University of South Florida in a similar capacity.

Hendrick served as the defensive coordinator at South Carolina State University in 2007 and before that, he was the head coach at Benedict College from 2003-06. While at South Carolina State, the Bulldogs’ defense held opponents to 19.6 points and 287.1 yards per game. They also intercepted 11 passes, forced 19 fumbles, recovered 11 fumbles and collected 17 sacks. SC State finished the 2007 season with a 7-4 record, including outscoring opponents 138-49 in three consecutive victories to close the season.

As the head coach at Benedict, the Tigers’ defensive units were nationally ranked in NCAA Division II all four years. In addition, he produced a nearly 90 percent team graduation rate.

The University of Pittsburgh graduate began his coaching career as the outside linebacker’s coach at Delaware State University in 1983. He then went on to spend two seasons (1984-85) at his alma mater coaching the offensive line before serving in the same capacity at Southern University in 1986.

Hendrick coached in the pros for a second time as a member of the NFL Fellowship Program with the Philadelphia Eagles before an eight-year stint at Mississippi State University (1995-2002) as the defensive line/special teams coach.

Portions of this article are courtesy of Jackson State Athletics