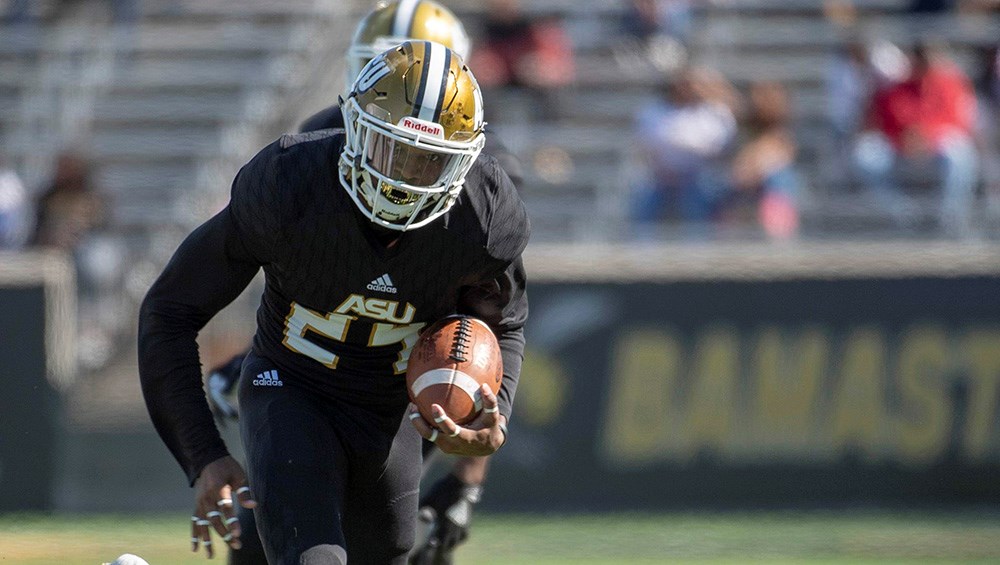 November schedule brings the Hornets back home to Montgomery.

MONTGOMERY, Ala. | Alabama State rode the arm, and legs, of KHA’Darris Davis and the defensive prowess of Joshua Hill to a 30-21 Southwestern Athletic Conference (SWAC) victory over Texas Southern at ASU Stadium Saturday afternoon.

Hill wasted little time making a difference in the game on Saturday, stepping in front of a Devin Williams’ pass at the Texas Southern 29-yard line and racing untouched for a 7-0 Alabama State with less than three minutes in the game at 12:12 of the first quarter. The interception was the first of the season for, and his fourth overall, and his first return for a touchdown.

Texas Southern (2-7, 1-4 SWAC) answered right back after a two-yard run by Brad Woodard tied the game up at 7-all with 11:34 remaining in the opening half. However, Alabama State came back to take the lead just four minutes later when Davis scored on a 10-yard run, one of his career-high 104 yards on the ground on 24 carries, to give the Hornets a 14-7 lead with 7:40 remaining in the half.

And the score would remain that way heading to the locker room.

Texas Southern quickly came out in the third quarter and tied things up on the first play from scrimmage when Williams hit Tren’Davian Dickson for a 90-yard catch and run – one of just two receptions by Dickson on the day – with 14:47 remaining in the third quarter.

Alabama State (3-5, 2-2 SWAC) answered back when Jeremiah Hixon caught his first career touchdown on a 17-yard pass from Davis for the 21-14 lead with 11:52 remaining in the third, and the lead stayed that way for just 41 seconds when Woodard scored on a seven-yard run with 11:11 remaining in the quarter to tie the game at 21-all.

Davis to @jeremiah_hixon7 for the touchdown!!

The game would stay that way until the opening of the fourth quarter when Davis hit Michael Jefferson on a one-yard touchdown pass for a 28-21 lead, and the defense sealed the contest when Ricky Haley and Trevor Goodrum combined on a safety for a 30-21 lead with just 1:46 remaining in the contest.

Davis finished the night with 275 yards of total offense, including 171 yards on 16-of-25 passing with a pair of touchdowns and an interception. Ezra Gray and Hixon tied for the team lead with three receptions each in the win, while Jefferson added a pair. Darron Johnson and Kurron Ramsey led the Hornets defensively with eight tackles each, while Anthony Craven finished the day with six punts for a 43.7-yard average and he pinned Texas Southern inside the 20 four times.

The Hornets would need to win out in their next three games (Jackson State, at Prairie View A&M and against Mississippi Valley State PLUS receive help with an Alcorn State loss against Jackson State on Nov. 17) in order to win the SWAC East Division.