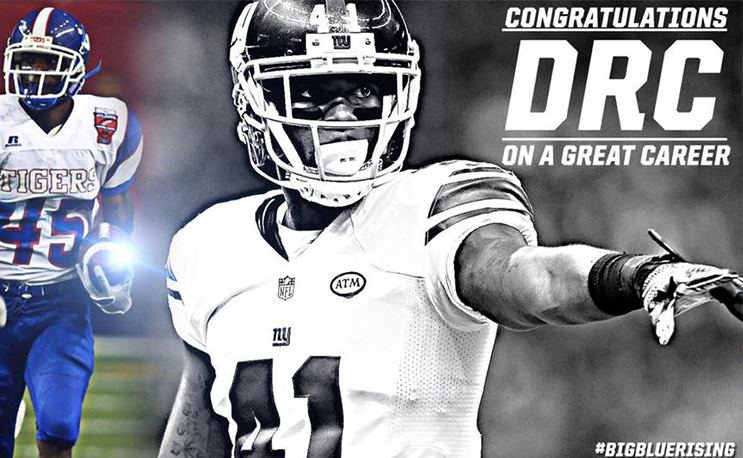 Dominique Rodgers-Cromartie, the last HBCU player drafted in the first round, retires

Former TSU star Dominique Rodgers-Cromartie, the last HBCU player picked in the first round of NFL Draft, has called it quits.

Tennesse State alumnus and two-time Pro Bowl cornerback Dominique-Rodgers Cromartie has retired from the NFL. The Oakland Raiders defensive back announced his retirement via Instragram on Tuesday.
https://www.instagram.com/p/Bpj-Rz_F_fG/?utm_source=ig_web_button_share_sheet
Rodgers-Cromartie was a three-time First-Team All-OVC and FCS All-American defensive back at TSU from 2004 through 2007. Though he was not initially considered to be high in draft stock, he impressed scouts during Senior Bowl week practices and an impressive 40-yard dash time of 4.29 seconds. Rodgers-Cromartie was selected 16th overall by the Arizona Cardinals in the 2008 NFL Draft, making him the first player from an FCS school to be drafted in the opening round since 2000. He is also the last HBCU player to be drafted in the first round.

DRC entered the NFL with a five-year contract with the Arizona Cardinals in 2008. In his rookie season, he had multiple amazing performances. In Week 11, DRC intercepted Matt Hasselbeck twice to secure a win over the Seattle Seahawks and returned a fourth-quarter interception 99 yards for a touchdown against the St. Louis Rams in Week 14.

In the playoffs, he played a pivotal role in the Cardinals advancing as he picked off Matt Ryan in the Cardinals wildcard victory over the Falcons and picked off Jake Delhomme in the red zone in the Divisional victory over the Panthers. The Cardinals defeated the Eagles in the NFC Championship game and fell to the Steelers in the Super Bowl. He finished his rookie season with 35 solo tackles, four interceptions, 19 passes deflected and a 99-yard touchdown run.

In his second season, Rodgers-Cromartie started all 16 regular-season games and recorded six interceptions, three forced fumbles, 49 solo tackles, and a touchdown. He was selected to the 2009 Pro Bowl but could not participate due to an injury from the Cardinals loss in the Divisional round of the playoffs. In the 2010 season, he had three interceptions, two of which were pick-sixes, and 42 solo tackles.

The Cardinals traded DRC to the Philadelphia Eagles in 2011, where he stayed for two seasons. He did not score any touchdowns with the Eagles and concluded his two years there with three interceptions. In 2013, DRC then signed with the Denver Broncos for one year. The Broncos made it to the Super Bowl but were defeated by the Seahawks, where DRC recorded one tackle. He finished his season in Denver with 31 tackles and three interceptions.

The Giants signed DRC to a five-year deal in 2014. He was voted back to the Pro Bowl in 2015 after recording three interceptions, one touchdown 52 solo tackles and two forced fumbles. He was also selected as an All-Pro in 2016 when he picked off a career-high six passes.

The Giants released him and he signed with the Oakland Raiders where he recorded eight tackles and two passes defended through his seven games. His career concluded with two Super Bowl visits, two Pro-Bowl selections, and an All-Pro bid.

Dominique Rodgers-Cromartie, the last HBCU player drafted in the first round, retires