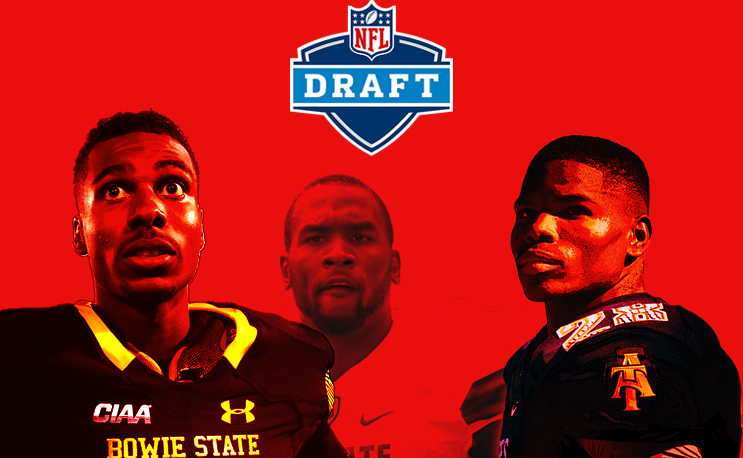 Why do scouts continue to ignore and discount HBCU prospects when it comes to the NFL Draft?

There are over 30 NFL Hall of Famers hailing from Historically Black Colleges or Universities. Despite a rich history of producing talent that continues today, the disparities and lack of attention HBCUs receive from the league is discouraging. The Draft Network, a site acclaimed for its scouting, recently released an early Top-500 list of prospects for the 2019 NFL Draft. Of this list, not one player came from an HBCU. Despite the continuous production of upper-echelon talent, black schools continue to be overlooked, from the scouting reports to draft night.

Struggling to get noticed

The Chicago Bears are 5-3, and a large reason for that is second-year running back Tarik Cohen. The dual-threat speedster is one of the most electrifying players in the NFL. To some, he’s a mythical change-of-pace back that came out of nowhere. To those at North Carolina A&T, he’s the pride and joy that had to jump through hoops to get the acclaim he rightfully deserved.

Nicknamed “The Human Joystick,” Cohen electrified the Mid-Eastern Athletic Conference for several years. HBCU Gameday and other outlets spread clips and news of this 5’6 speed demon that rushed for more than 5,600 yards in his career as an Aggie, yet he remained unknown on a national scale. The power of social media was a great help to Cohen’s ascension, as a video of him doing a back flip catching two footballs simultaneously went viral. This widespread catch caused ESPN to have him perform the trick live on air, which he did, further increasing his allure.

Cohen finished his career as the MEAC’s all-time leading rusher before being drafted by the Bears in the fourth round. He is now a focal point of its offense. One could ask if Cohen’s descent to the fourth round was due to his small Darren Sproles-like frame, or him coming from A&T. It couldn’t have been due to his resume, or his combine performance. Nevertheless, this is one case of many. In fact, Cohen was the first HBCU running back drafted in 19 years!

In the 2018 Draft, the Indianapolis Colts selected South Carolina State linebacker Darius Leonard in the second round. Despite being in rebuild mode with safety Malik Hooker being the only centerpiece of the Colts defense, the pick of Leonard was criticized. The two-time MEAC Defensive Player of The Year and 2017 HBCU Gameday/Protect Your Skull Defensive Player of The Year finished his career with a standout performance at the Reese’s Senior Bowl. Overlooked nonetheless, Leonard has become the focal point of Indy’s defense, and an early front-runner for Defensive Rookie of the Year.

There are plenty of players across the league, drafted and undrafted, that have made the HBCU world proud at the next level. Recently retired cornerback Dominique Rodgers-Cromartie is a former first-round pick out of Tennessee State University. DRC is a two-time pro bowler and a 2016 second-team All-Pro. New Orleans Saints tackle Terron Armstead is one of the league’s highest-rated linemen according to Pro Football Focus. The former University of Arkansas-Pine Bluff star will likely make his first Pro Bowl this season if he remains healthy. The New York Jets backfield features two HBCU running backs; Alabama State’s Isaiah Crowell and Virginia State’s Trent Cannon.

With that said, the NFL still isn’t doing its due diligence in drafting HBCU talent. The 2013 NFL Draft was the last time five or more HBCU players were selected.

Even with the surplus of HBCU talent currently in the league, the draft world is uncomfortably silent on the HBCU class of 2019.

Bowie State quarterback Amir Hall is the player to watch in a draft class with an underwhelming quarterback group. Hall is the reigning Black College Player of the Year, and he recently broke the CIAA Conference record for all-time passing touchdowns with 98. A 6’4 pass-first field general, Hall has the tools and intangibles not seen out of an HBCU quarterback since the late Steve McNair.

It’ll be interesting to see in the coming months how he is evaluated and ultimately whether or not he’ll be drafted. On November 5, The NFLPA announced Hall accepted his invite to play in the annual Collegiate Bowl, in hopes of raising his draft stock. This is a step in the right direction, as the best black college prospect in the nation will be center stage at a position that hasn’t been receptive of drafting black quarterbacks historically. Hall becomes the first Bowie State player accepted to play in the game. More importantly, though, he hopefully will become the first HBCU quarterback selected in the NFL Draft since Tavaris Jackson in 2006.

As of today, HBCU schools Morgan State, Grambling State and Jackson State have more NFL Hall of Famers than FBS powerhouses like LSU, West Virginia, Clemson, Wisconsin and South Carolina. From Jerry Rice to Walter Payton to Michael Strahan, the list of HBCU Hall of Famers is jaw-dropping, yet it’s to no avail.

What will it take to get some respect and attention?

Maliik Obee is an emerging NFL scout based in Maryland.