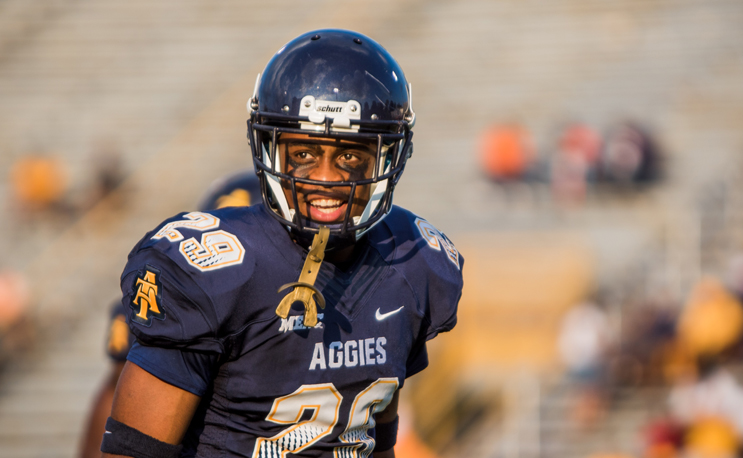 North Carolina A&T’s title and postseason hopes are still alive, but it just lost a key member of its defense.

With North Carolina A&T’s homecoming in full swing, its set to be a big weekend in Greensboro on and off the field.

But A&T’s football squad was just dealt a big blow as it prepares to take on Norfolk State. Head coach Sam Washington announced that All-American defensive back Franklin “Mac” McCain is out for the season. McCain tore his ACL in his team’s win over Bethune-Cookman in Daytona on October 13.

While McCain’s injury won’t stop any GHOE parties, it should concern those who follow A&T football regularly. McCain was a key cog in A&T’s perfect 2017 season, picking off six passes as a freshman. Earlier this year his 101-yard interception returned for a touchdown helped spark the team’s 27-21 upset over FBS East Carolina. He has two picks and eight passes defended in his eight appearances.

A&T is currently 6-2, second in the MEAC behind Florida A&M with three games remaining in its season. It would need to win all three of those games and have FAMU lose twice in its final three games to win the MEAC and advance to the Celebration Bowl for the third time in four years. If not, it will have to hope for an at-large bid to the FCS playoffs, which it received in 2016 before being blown out by Richmond.

NSU comes limping into the game with three consecutive losses, scoring just nine points in those three losses. The Aggies have the top scoring defense in the MEAC, allowing just 14.5 points per game. And the Spartans have one of the worst offenses in the conferences, scoring just 16.3 ppg.

On paper, this should be an easy win for A&T. But then again, so was Morgan State coming into that game. Don’t forget Norfolk State is the team that went down to Durham and broke North Carolina Central’s hold on the MEAC last year. Not saying it will happen this weekend, but it is not out of the realm of possibility.