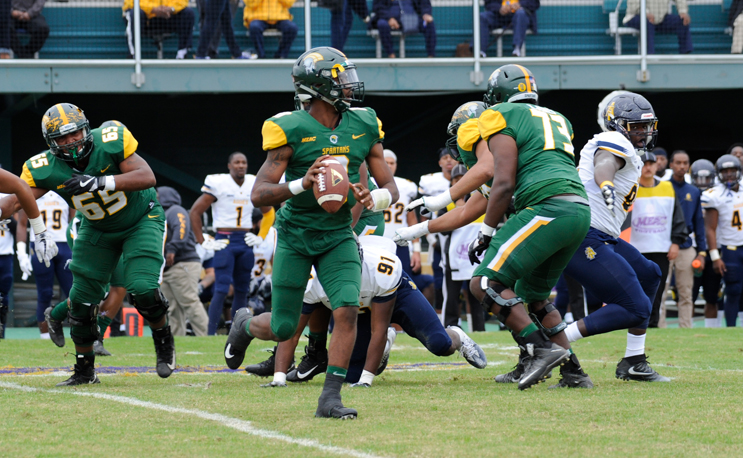 Juwan “Pootie” Carter is maturing and Norfolk State football is better for it.

With a name like Pootie, it’s hard not to stand out.

Norfolk State’s Juwan Carter first made waves in the MEAC last season when he went into O’Kelly-Riddick Stadium and came out as the first starting quarterback to beat North Carolina Central in its home stadium in nearly two full years. As a freshman.

Unfortunately for the rest of the MEAC, Carter and NSU appear to have taken a step forward this year.


NSU is 3-1, its best start since the 2011 season when it won a now-vacated MEAC title. It’s coming off an impressive 55-28 win over Delaware State, which followed a gritty 17-7 win over South Carolina State on the road.

Carter, of course, is a big reason why. The Richmond native had a career game against the Hornets, completing 23 of 31 passes for 318 yards and three touchdowns and added a team-high 37 yards and a touchdown on the ground in the win. He was named MEAC Offensive Player of The Week for his efforts.

“I’ve progressed a lot, but my game is not to the best of my ability yet,” Carter said on Wednesday. “I’m just getting better each and every day.”

Carter arrived in Norfolk last fall as a highly-touted player out of HBCU football factory Highland Springs High School. He led the program to a 39-3 record as a high school quarterback, including two-straight 5A state championships while being named the 5A Offensive Player of the Year as a senior.

Last season he played in all 11 games, starting the last nine, including the aforementioned NCCU win.

A year later, NSU head coach Latrell Scott and Carter appear to have developed a bond that goes beyond coach and quarterback. Last week, Carter joined Scott and his family for dinner.

“That was big, I’ll probably do it again soon,” Carter said.

“My son Chase is a huge Pootie fan,” Scott said. “So sometimes we have to call Pootie at night so Chase can have certain comments with him because they share certain dialogues that we won’t talk about,” Scott joked.

Scott is a fan of how well Carter absorbs coaching and criticism, and the attitude he brings to work every day.

“He’s a quick fix. He doesn’t make the same mistake over and over again,” Scott said. “You can see the maturation in him. He wants to win, he’s a competitor. I don’t have to worry about him showing up ready to practice and having a good time every day.

“He always has a positive attitude and does everything that we want him to do.”

This week Carter and Co. will head on the road to take on a FAMU team coming off back-to-back wins as well, including a solid win over Savannah State and a 55-14 blowout of North Carolina Central last week.

Despite his increasing confidence in his quarterback, he’s not looking for a shoutout this week, or ever. He also acknowledges that FAMU presents a formidable task for his defense, but he thinks it will be up for it,” Scott said.

“We have one of the better defenses in the conference. I think we have the ability if we play like we’re supposed to play to stop people. It’s not our goal to beat people 54-53.”