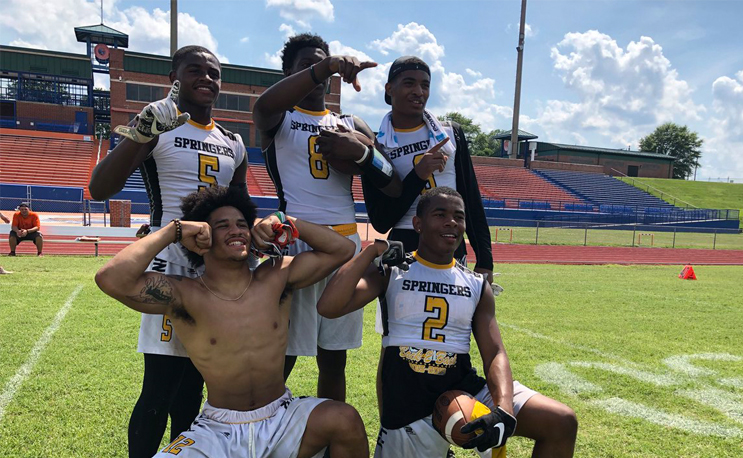 Highland Springs High School has been a solid source for HBCU talent over the last couple of years. Virginia State senior receiver Willie Stubblefield played his high school ball there, as did quarterback Juwan “Pootie” Carter of Norfolk State and one of his favorite targets in Virginia Union’s Jaiden Revis.

It appears that the Henrico County high school, located just outside of Richmond, VA, will have plenty of HBCU coaches in the stands during the 2018 season. A total of five players have received offers from schools in the CIAA and MEAC in the past few weeks, including rising senior quarterback D’Vonte Waller. His receivers Antwane Wells and Devyn Coles were offered by the Trojans as well as defensive back Treymane Talbert while linebacker/safety Christian Wells has been offered by VSU and NSU.

After two years of grooming and splitting time to start his junior season, D’Vonte Waller finally asserted himself as his team’s starter last season and colleges are starting to take note. Waller threw for 2,700 yards and 26 touchdowns last season as he led the school to its third-straight Class 5 title.

Our Starting Quarterback D'Vonte Waller! This season he took over as the starter and all D'Vonte did was throw for 2700 yards and 26 touchdowns. Slim as we like to call him has grown into a leader and one of the top Quarterbacks coming back in the area. pic.twitter.com/amOt5USI0z

He has picked up two offers from HBCUs, so far, both of them in the CIAA. The 6’1, 171-pound signal caller has picked up an offer from St. Augustine’s University as Virginia State in May and June according to his Twitter feed.

Bookmark this page for updates on Highland Springs players and subscribe below to never miss a post.
[email-subscribers namefield=”YES” desc=”Subscribe today and never miss another HBCU Gameday post” group=”Public”]