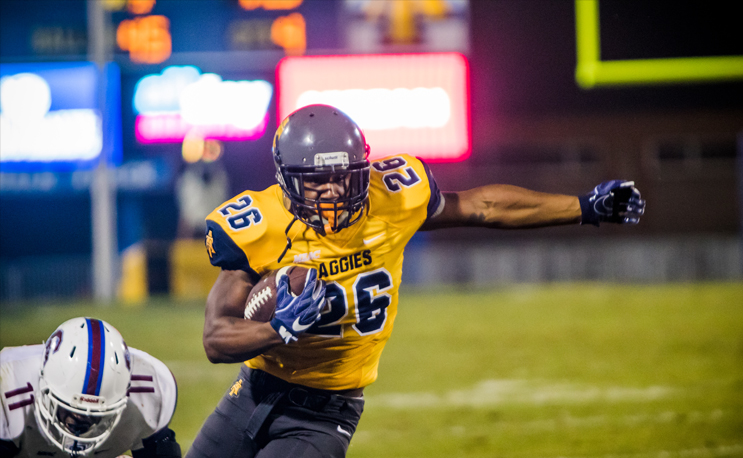 After a slow start, A&T got rolling and it was all downhill for South Carolina State.

After a shocking loss to Morgan State on Saturday, North Carolina A&T showed resilience on Thursday evening in its 31-16 comeback victory over South Carolina State.

The first score came from South Carolina State’s as junior linebacker Lane Jones forced a fumble on a North Carolina A&T punt return deep in their own territory.

Now in perfect scoring position, the Bulldogs were first to strike with just under six minutes remaining in the first quarter with a rushing touchdown from freshman running back Ferrika Grier. The Aggies, slow to start on offense, responded with a field goal with 16 seconds remaining to end the first quarter trailing 7-3.

In the second quarter, another A&T punt return fumble was recovered in the end zone and turned into a touchdown by South Carolina State’s redshirt senior receiver Jermaine Baxley. A failed extra point attempt gave the Bulldogs a 13-3 lead with just over ten minutes remaining in the first half. After another punt from A&T, a connected field goal extended the Bulldogs lead to 16-3 with 5:56 remaining. Aggies running back Jah-Maine Martin ran a much-need 40-yard touchdown with just over 30 seconds remaining in the first half to cut A&T’s trail to six points. The Bulldogs went into halftime leading 16-10.

A stall from South Carolina State and resurge from North Carolina A&T on both sides of the ball completely shifted the course of the game in the second half. On the opening drive, the Aggies drove 94 yards down the field in seven plays with the help of a 53-yard gain from redshirt senior running back Marquell Cartwright. A 9-yard connection between senior quarterback Lamar Raynard and redshirt sophomore receiver Zachary Leslie gave the Aggies the lead, 17-16. The Bulldogs were held to 20 yards from three possessions in the third quarter.

#22 RB Marquell Cartwright with a break-away run for the Aggies. pic.twitter.com/r9QFa3DxzP

The Aggies opened up the fourth quarter with Raynard connecting with junior receiver Ron Hunt on third-and-goal for a seven-yard touchdown to extend their lead to 24-16. After a three-and-out and punt from South Carolina State, A&T sealed the deal. Raynard threw a 44-yard touchdown pass on 3rd-and-16 to redshirt senior receiver Malik Wilson, putting A&T up over SC State 31-16. The Bulldogs were shut out on offense in the entire second half of regulation.

South Carolina State relied heavily on the run as sophomore quarterback Tyrece Nick finished under 100 yards with five completions, going 5/16 with 90 yards. Nick also finished leading in rushing with 20 carries for 89 yards with a 32-yard gain.

A&T quarterback Lamar Raynard had a much better game, finishing 19/27 with over 253 and three touchdowns. Cartwright had a night as well, finishing with  18 carries for 157 yards.

Cartwright with 150 yards vs. SCSU. This ain’t your Big Brother’s SC State D.