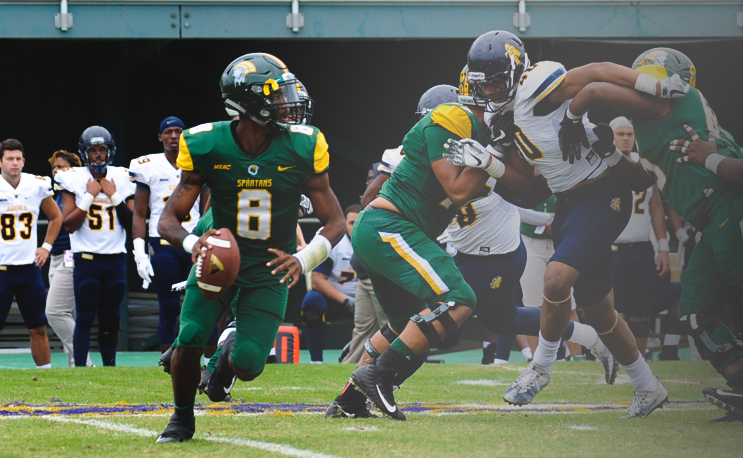 Week Five of MEAC play to feature some intriguing games that could matter late in the season.

After a conference game that didn’t count shook the MEAC last weekend, fans and media members were confused about why some MEAC games will not count this season. Commissioner Dennis E. Thomas added more clarity to the issue this past Tuesday on the MEAC Conference call.

With the departure of Hampton to the Big South, some teams were left with an empty date on their schedule. Schools agreed to fill those dates with other schools in the conference. The MEAC’s seven-game conference schedule also plays a role in this. Since a team can’t have more than seven conference games on one’s schedule, some MEAC games would not count this season due to this limit. Thomas spoke of a solution to this problem. With the departure of SSU, the MEAC is left with eight football schools next season. Therefore, all teams will play each other; making the conference slate to eight games.

Though the confusion and discussions, week five is shaping up to be a great week. There’s an important matchup, a potential trap game, a winnable game for one school, and a team recovering from its first loss in almost two years. With four games on the slate, here’s the MEAC Week Five picks!

The Spartans are a dark horse contender in the MEAC at this current moment. They are currently at 2-1 and will most likely be 3-1 after this matchup. Sophomore QB, Juwan Carter is a rising star within the MEAC ranks. He started all games for NSU last season and is back this season. Last week he went 22 for 38, throwing for 281 yards and a TD. Running Aaron Savage ran for a cool 86 yards last week as well. This duo is legit and under the radar.

Expect an easy one here.

What’s going to be interesting is if the Spartans go on a roll, their MEAC title chances will be higher than expected. They will have the opportunity to face Howard and NC Central at home later this season.

This game is the game of the week, hands down. Although it’s week five, it has MEAC title implications all over it. Both of these teams have Howard on their schedule, who just gained a major conference win. Hypothetically, the winner of this game will have some leverage. Winning this and then beating Howard could put them in the driver seat. This scenario fits NCCU  better as they face Howard next week.

This game just might come down to the 4th quarter. For FAMU, Willie Simmons has calmed the noise down a little bit. They drafted SSU last week with a balanced offensive attack. Running back Bishop Bonnett is most definitely a player to watch. He had 89 rushing yards and 70 receiving yards last week. His all-around performance looks to be the start of something big. But of course, this offense goes through Ryan Stanley. He ranks 3rd in passing yards within the conference right now. His only challenge is to find the end zone a little bit more.

We haven’t really seen a lot of NCCU this year, even playing three games. It faced Prairie View, and it did not go well. St Aug’s was a cupcake game. And Duke, just cut the check! With a game being postponed as well, this is the Eagles first true MEAC game of the season. The Eagles feature Isaiah Totten in the backfield and have QB, Chancey Caldwell at quarterback.

Minus the 600 yards that Duke put on them, the Eagles defense has looked shaky so far. Prairie View exposed it on national TV. Due to this fact, look for FAMU will take advantage of shaky defense and roll to a major win on the road.

Bethune-Cookman took a tough loss to Howard last week but their performance was a major statement. They accumulated over 400 yards of total offense while forcing a fumble and INT on defense. Meanwhile, for SSU, they are playing “party crashers” during their last season in the MEAC.

Look for BCU’s offense, led by Akevious Williams, to push the Wildcats to a well-needed win.