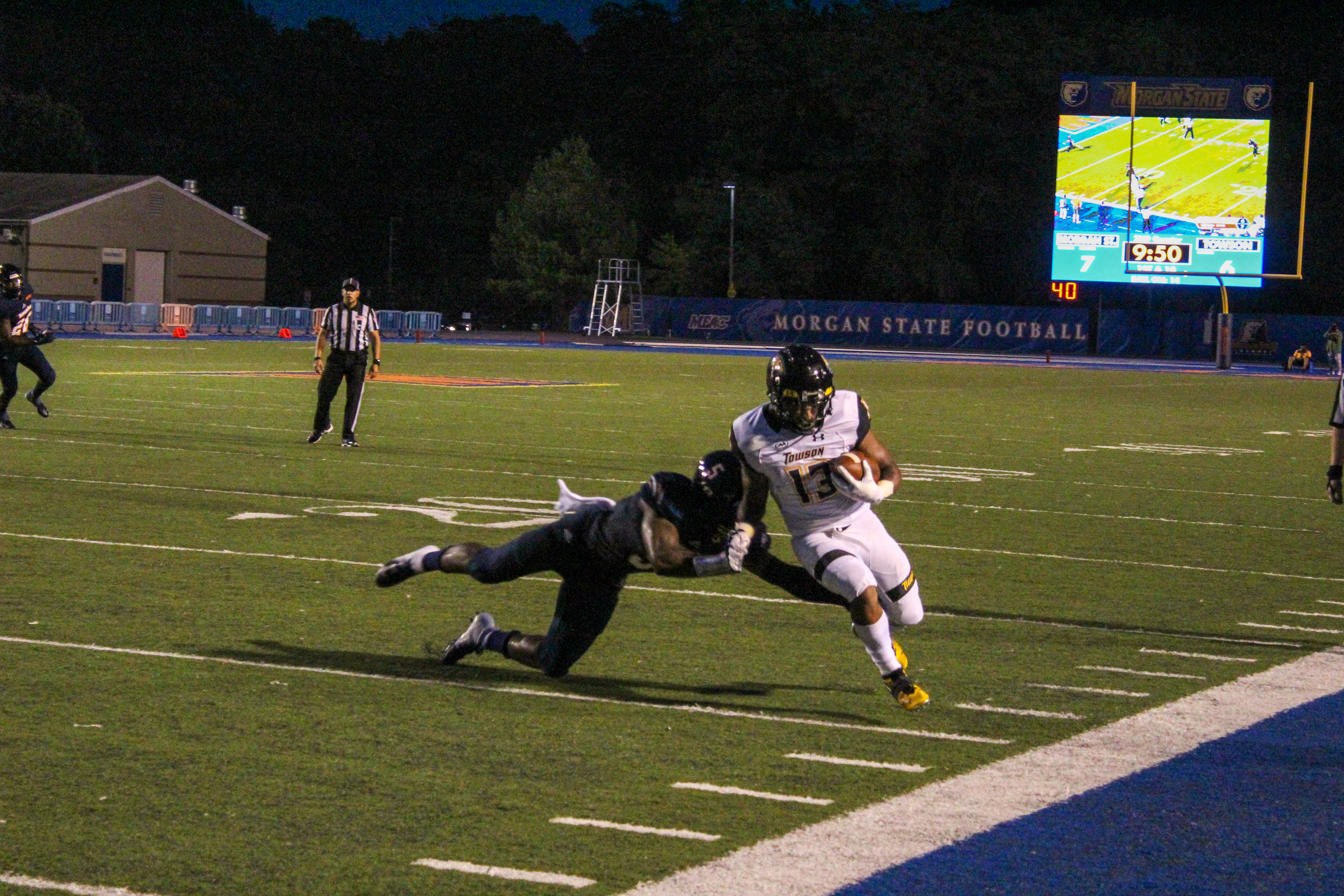 Morgan State searching for identity as it falls to Towson

Morgan State falls to Towson as it tries to find its footing in The Battle of Greater Baltimore.

The Battle for Greater Baltimore puts Towson against Morgan State. It is promoted well and on paper is a rivalry game.

On the field this year, however, it was no contest. With the home crowd behind them and a new coach at the helm, Morgan State lost to Towson 36-10.

With about 10 minutes past in the first quarter, Towson muffed a punt and MSU landed on it in the end zone. The result was an MSU touchdown; the only one they scored all night. It was recovered by kicker Zach Castano, tearing his ACL in the process. Nick O’Shea added the extra point and a field goal in the 4th; ending out the scoring for MSU. Morgan’s specialists scored the only points for the Bears.

Towson muffs the punt, Morgan recovers and turns it into a touchdown.
Morgan leads 7-0 pic.twitter.com/UtRGh04Btt

Leading the offensive assault for Towson was Tom Flacco. Yes, Joe Flacco’s brother. He slowly carved the MSU defense for a tune of 245 yards and two touchdowns. The Tigers added 183 yards rushing as well. Their longest allowed rushing attempt came from Flacco while scrambling. Like last year, in the offseason and now; the topic of conversations in terms of MSU’s biggest problems are offense and staying disciplined.

The Bears gained 127 yards rushing but lost 56. MSU had 66 yards rushing on 37 attempts. That’s not productive at all. DeAndre Harris started at quarterback for MSU and had 104 yards on 21 total attempts. Backup QB DJ Golatt added three attempts as well.

Interim Coach Ernest Jones emphasized running the ball when asked by the media and he stayed true to his word. Moving forward, it will be interesting to see if it stays that way. With MEAC teams starting to open their playbooks up a little more; MSU might have to do the same in many situations.

Penalties were a huge factor for MSU, in a bad way. The Bears had 12 penalties that totaled to 107 yards. Being undisciplined gave room for TU to set up shop in Hughes Stadium and control the game.

The only thing that MSU controlled was their amazing Halftime performance by the Magincifant Marching Machine.

“We didn’t execute to the game plan that we put out,” said Coach Jones.

Execution is something the whole MSU campus is looking for in terms of the Football team. With increased enrollment, a stronger athletic staff, and more overall support; MSU is looking for their Bears to execute on the field.

Unlike other teams within HBCU football, Morgan State has a major rival that’s a PWI. Less than 15 minutes apart, MSU and TU’s rivalry is something worth noting; especially within the student bodies.

Only scoring 10 points in their last two outings against a rival is rather embarrassing. Especially the cultural and historical context of the relations between the two schools; student bodies and even systemically when it comes to funding from the State of Maryland.

There were moments of potential in the team. But it comes down to execution. “It’s a New Day” is being promoted as a motivation point for the program. It’s something that the once-proud football program desperately needs.

Despite the tough loss, MSU hopes to turn things around soon. But the competition doesn’t get any easier in Week Two as it faces Akron.

Morgan State searching for identity as it falls to Towson