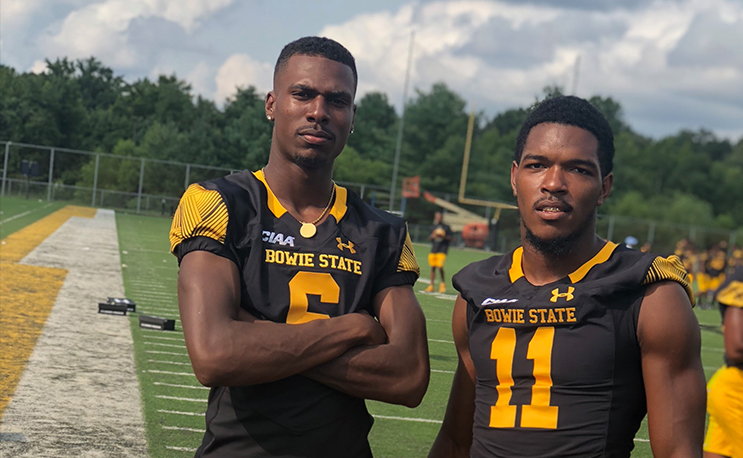 Bowie State and Shaw unveiled their new Under Armour looks while WSSU fans will have to wait.

Earlier this year the CIAA, oldest HBCU athletic conference, announced it was signing with the youngest player in the uniform game in Under Armour.

Slowly but surely, teams from the CIAA have started revealing their first post-Russell looks. On Sunday both Bowie State and Shaw showed off their new threads in team photo sessions.

Shaw is the oldest HBCU in the south and a founding member of the CIAA, so it’s not surprising it went with a look as conservative as a GOP candidate in Utah. Not much to talk about as its pretty straight-forward, although it should mesh well with the helmet design Shaw rocked last year. Kind of like an Under Armour version of the home whites NCCU came out with when the MEAC went to Nike in 2016.

Bowie State, the current CIAA favorite, added a bit more flavor with its new black unis. In keeping with BSU tradition, the gold is featured prominently not only on the front but on the side with a sleeve pattern.

Earlier in the week Virginia State and Virginia Union unveiled their new looks as well. None of the CIAA uniforms put out yet have been groundbreaking, but most appear to be an improvement over what Russell laid out in previous years.

One CIAA team that won’t be wearing new uniforms this year is Winston-Salem State. WSSU will continue to wear the Russell uniforms it debuted in the 2016 season for a third consecutive year according to officials. CIAA schools have two years to fully transition all of their athletic teams to Under Armour as the conference had to figure out a quick solution after Russell got out of the game.
[matchedContent]