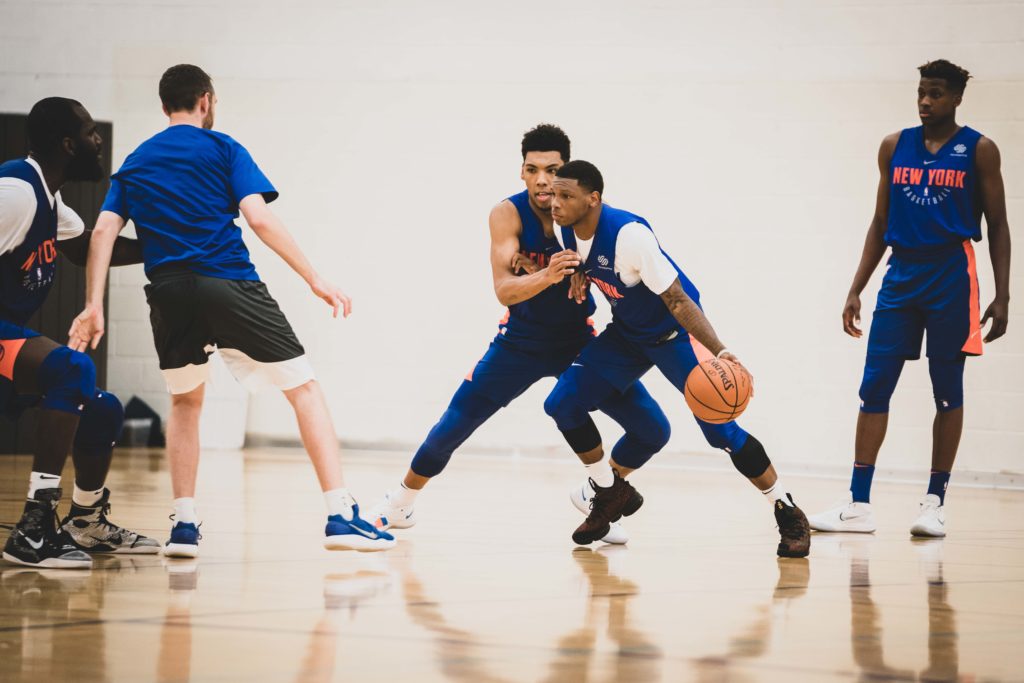 After maximizing his opportunity in summer league, Walker is ready for a new job.

ATLANTA–Tyrius Walker hasn’t sat on the bench during a basketball game for quite a while. He certainly didn’t see much pine during his stellar career at Morehouse College. However, after joining the New York Knicks summer league team that’s exactly where he found himself. Three games into the Knicks’ schedule in Las Vegas Walker had logged just one minute of mop-up duty. The lack of action was a surprise for Walker.

“I did not know it was going to be like that. I knew I was going to have to work hard and show coaches I’m not just a D2 player, I’m a player that knows how to play and make my teammates better. Sometimes you got to be patient, everything can’t come easy,” Walker said.

Trust the Path God send you down🙏🏾 pic.twitter.com/GRReONIdHm

Walker picked up five minutes in the fourth game of the schedule, scoring his first ever NBA sanctioned points. Three to be exact. With one game left on the schedule, Walker got the start and scored 16 points in 26 minutes of action versus New Orleans.  Finally, he got the opportunity to show the world exactly what he could do on the court.

“He was matched up against a player that got NBA minutes last year in Walter Lemon, who just signed a two-way contract with the Boston Celtics. Tyrius went out there and competed on what is arguably the highest level that summer league can offer,” said Walker’s agent Darrell Comer.

The opportunity was late, but it surely trumped the possibility of never. Part of Comer’s job was to keep his client assured that the dream wasn’t being deferred.

“I’ve been in this business long enough to know that sometimes guys get a little frustrated. The day that you slack off your preparation, or you do one thing differently than you typically would have on a game day is the day that your name is called.”

Comer is a sports agent with You First Sports. The agency represents NBA players Kristaps Porzingis, Kyle Lowery, and Jeff Teague among others. Comer is also a fellow Morehouse man but he was sold on Walker’s ability not the Morehouse connection.

“Our firm typically doesn’t sign D2 players but I saw something in him. I laid out a list of things that he could shoot for that would make the process easier. Kudos to the kid because he did it all.”

The 16-point performance was complemented by some stellar defense. Tyrius also came up with five steals in the game.

And finished with this great play pic.twitter.com/e2tGcHFmUg

“I wanted to make my defense better than what it was in college. That whole time after the season I was putting in work to get faster and show that I could defend on the ball against the greats,” Walker said.

Now it’s back to offense, particularly with Comer. The NBA Summer League is over and he has to leverage Walker’s buzz from his final game.

“My phone was blowing up. There was a scout there to actually see one of the players on the other team who reached out to me just by pulling it up online and seeing that I was his agent. Everyone was just wondering who this kid was?”

It may be overseas, it could be the G-League, but Comer feels confident that Walker has a lucrative career before him. He knows that he has to put his client in the best possible position to succeed.

“It’s not just about taking a job but taking the right job. It’s about building a story and narrative so that he can get to the highest level possible,” Comer said.

For Walker the narrative is clear:  Patience.

“I’m a player that knows how to play and make my teammates better. Sometimes you got to be patient, everything can’t come easy,” he said. “I want to work for it and show people that I can be patient too.”

Basketball talent is a gift. Patience is a virtue. Walker is blessed to have both.