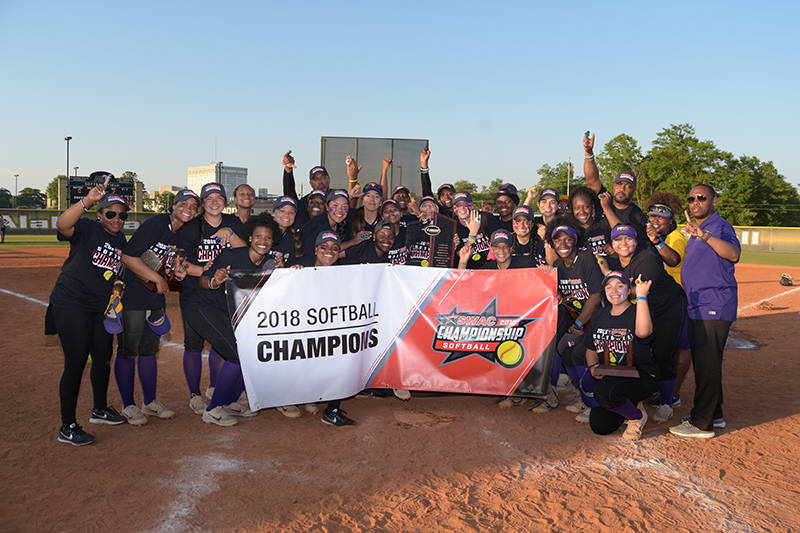 It’s been a long time coming for PVAMU.

Down 3-0, Prairie View (20-21) rallied in the bottom of the fifth, as Keona Hunter was plunked and Destinee Williams managed a single. After a sac bunt moved both into scoring position, Alyssa Garcia ripped a single to left to score Hunter. SWAC Softball Tournament Most Valuable Player Laurisa Hernandez then knotted things up with an RBI single to center that scored D. Williams, and Garcia came home thanks to an error in centerfield.

After a quick 1-2-3 sixth inning, compliments of Crystal Castillo, Shelby Williams reached via error and alertly advanced to third after a groundout by Hunter. D. Williams then gave PVAMU the lead with a two-out RBI single to score S. Williams for the go-ahead run. Castillo retired the side to bring the Lady Panthers their first SWAC title since 1998.

A pitcher’s duel through three innings, the Lady Hornets used the long ball to jump ahead in the top of the fourth, as Charlene Castro blasted one over the left field wall for the game’s first run and Amira James (2-for-3) followed with a two-run shot, prompting Ashley Higgins to come on in relief of starter Vanessa Castro. Higgins was able to work out of a bases-loaded jam to limit the damage.

The Lady Panthers mounted a threat in the bottom of the frame with singles by pinch-hitter Alyssa Garcia and Hernandez. Although ASU starter Justine Jean struck Kylar-Ward Flowers with a pitch to load the bases with no outs, Jean buckled down to retire the side, with two strikeouts sandwiching the end of the rally.

D. Williams and Hernandez each had a pair of hits. Castillo earned her third win of the tournament with 2.0 innings of shut-out ball in relief.

Prairie View fended off a late rally attempt by Alabama State in game one, using a three-run first inning to surge ahead — during which Hernandez belted a two-run double near the warning track out right, and Ward-Flowers added an RBI single. Alabama State got one back in the second as Kaitlyn Kilner scored on an RBI sac fly by Aimee Felicies.

Prairie View pushed ahead 4-1 with an RBI double by Hernandez, and went ahead 5-1 after Hunter delivered an RBI single that brought home Alexis Freeman.

In the sixth, Casey Durham tried to give the Lady Hornets a jolt with a solo blast over the left field wall, and Alabama State had a chance to win it in its last at-bat. MaKayla Burt drew a walk, and Felicies followed with a single. Vanessa Bradford brought home pinch-runner Marina Clark with an RBI single to right, prompting V. Castro to come in for relief of Prairie View starter Castillo.

Keona Hunter guns down the runner at home to force the "if game" here at the SWAC Softball Championship #theSWAC @theSWAC @pvamusoftball pic.twitter.com/H6renmu6zD

V. Castro struck out pinch-hitter Natalia Rivera, and though Kimberlee Owens picked up a single, Hunter managed to gun down a hard-charging Felicies at the plate, with Amanda Ford making the tag to force the sudden-death game.

Kelsey Coronado went 1-for-3 with two runs. Castillo got the win with 6.1 innings of work, allowing five hits and three runs. She struck out three.

The All-Tournament Team is listed below.