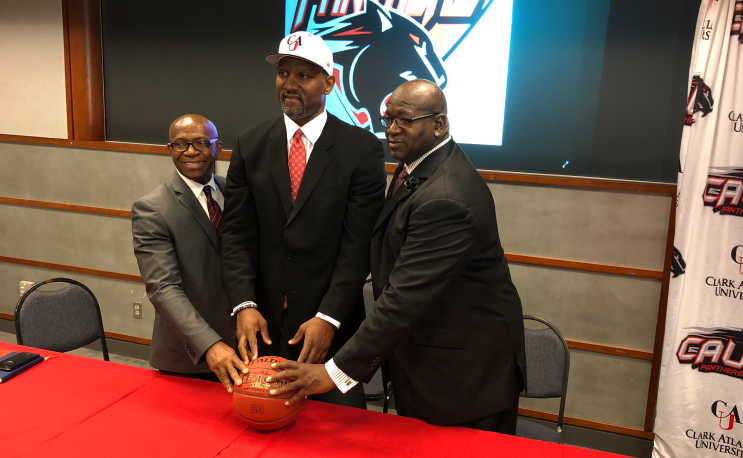 The Panthers are now looking forward to the 2018-19 season.

Clark Atlanta University has finally named a new men’s basketball coach to replace Darrell Walker. Once again it’s a former NBA player. George Lynch, who should be well known in Atlanta after a stellar ACC career, was introduced at a Monday press conference.

“It was an opportunity for me to be a head coach to lead my own program. I had a great opportunity to work under some great head coaches to get my experience, visualize how I would run my team. Mr. Dawson offered me an opportunity that I couldn’t turn down,” Lynch said.

Lynch, who won a national championship at the University of North Carolina in 1993 before being drafted by the Los Angeles Lakers, will take over for the departed Walker.

George Lynch talks to @HBCUGameday about accepting a head coaching job at an HBCU; and what he expects. pic.twitter.com/gFGP0RBSGV

The choice to hire Lynch was guarded with national security protocols, not being revealed until the press conference.  The former Tarheel has ties to Walker, who was an assistant with the Charlotte Hornets during Lynch’s final stop of his playing career.  Lynch retired from the NBA in 2005, after a 12-year career.

Since retiring, Lynch has worked on the coaching staffs of former Tarheels Matt Doherty and Larry Brown. He worked for both UNC alums during two separate stops at Southern Methodist University.

CAU Athletic Director Lin Dawson makes the point that despite hiring two consecutive former NBA players, this is not a cushy job.

“This is a grind, this is not celebrity coaching. We had several people who were interested in the job, but you may have to lay your celebrity down for a little bit. Not everyone is willing to do that,” said Dawson.

According to Dawson, out of all of the applicants who applied, seven were former NBA players.

When asked about how aware the current CAU players were of his playing career. Lynch concluded that they probably had to look him up on Google. Although they did find some common ground courtesy of one of his former teammates.

” Once I said that I played [with] A.I. (Allen Iverson), they all woke up. Playing with Allen I think helps a lot, these kids still recognize him,” Lynch said.

A look back at today's @caupanthers press conference. @GeorgeGdlynch93 is named the new men's head basketball coach. Lynch is the third straight hire at @CAU with a high profile background as a professional player. pic.twitter.com/lA49oUKSWk

For those under 35 who might not vividly remember Lynch as a national champion collegiate player, defense was the name of his game. It was defense that Lynch mostly spoke about on Monday. He went as far to say if you expected to come off of his bench, you would have to first play some defense.

Lynch doesn’t have any head coaching experience at the collegiate level. At SMU he served as a grad assistant before moving into strength and conditioning and then as director of player development.

There is no denying his hoops pedigree, however. Lynch played for Dean Smith, spent 12 years in the league and coached alongside the notoriously meticulous Larry Brown. Basketball knowledge won’t be a problem, he’ll soon get to show how that translates as a teacher and leader.