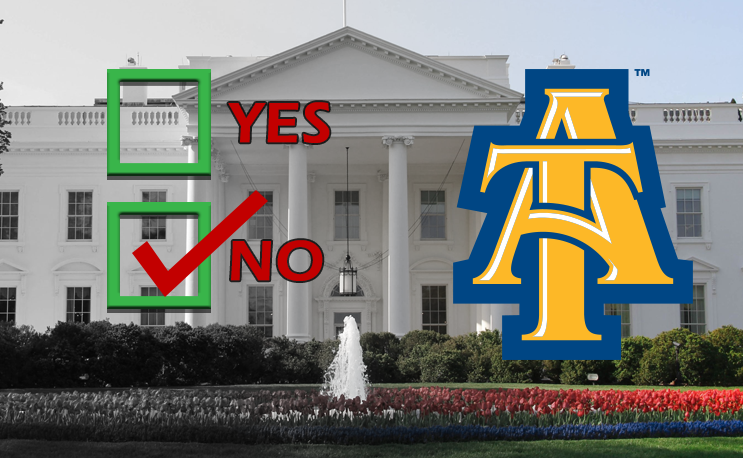 According to a viral tweet and multiple sources, North Carolina A&T football turned down an invite to Donald Trump’s White House.

Could North Carolina A&T be among the number of championship teams that have spurned a visit to Donald Trump’s White House?

A tweet with a claim that the football team turned down an invite to the White House has gone viral and while school officials deny any knowledge of an invite or decline, sources tell HBCU Gameday its true.

Shai-Ann Clayton, the student government association’s VP of Internal Affairs, tweeted on Tuesday that the team turned down the chance to visit Pennsylvania Avenue.

#NCAT our football team was invited to the White House to honor their accomplishments this past season… they DENIED! 👏🏽👏🏽👏🏽👏🏽 s/o to them!

Brian Holloway, A&T’s Associate Athletic Director for Communications, said he was unaware of any invite for the football team to visit the White House.

Multiple sources tell HBCU Gameday that the players themselves took a vote and decided not to make the trip.

A whirlwind of recognition

A&T went 12-0 in 2017, winning the MEAC title, beating Grambling in the Celebration Bowl and being named HBCU football national champions by multiple media outlets. The football team even got a shoutout from the floor of the U.S. House following the end of its season.

The team is currently involved in a “Victory Tour” which included being honored by Guilford County and the State of North Carolina.  The Aggies also served as grand marshals in Greensboro’s Martin Luther King Jr. parade on Monday.

With all the accolades A&T has received thus far, is it that far-fetched that the Trump administration would want to invite the reigning kings of HBCU football?