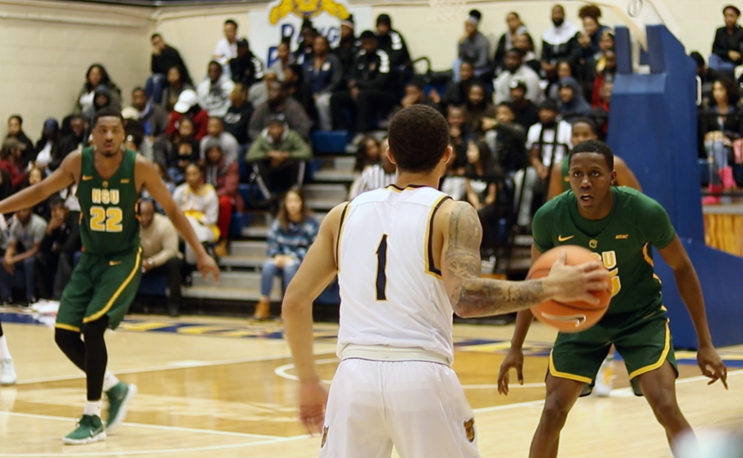 Spartans drop three in a row to North Carolina schools.

Norfolk State (3-15) was looking to get their mojo back after a loss to Division II Elizabeth City State earlier this week.  Instead, they found heartbreak city in Greensboro, dropping a 71-68 decision to North Carolina A&T (11-8) in the closing seconds.

The Spartans were down by 15 points at halftime but came back to tie the game with 20 seconds remaining. A&T’s Devonte Boykins delivered a heartbreaking 3-pointer with eight seconds remaining, for the three-point win.

It was a tournament style tip-off, with the game being played at 2 pm as a safety precaution against the icy conditions in Greensboro.

It’s a snow day here at @NCATAGGIES and the students are loving some Aggie hoops! Currently leading 38-23 at the half over @NorfolkStateU @WFMY pic.twitter.com/IQ4C8zUjSU

The Aggies were up 38-23 at the half, but the Spartans seemed to be on the verge of victory after their second-half surge.  Norfolk State went on a 9-1 run to tie the score at 63 late in the game.  A&T jumped back ahead 68-63 with 1:30 to go but Norfolk ran off five quick points to set up the dramatic ending.

The Spartans still had one more shot to tie the game at the last second but the shot fell short.  Alex Long led Norfolk State with 15 points. Denzel Keyes continues to show his steady improvement as a basketball player, he led the Aggies with 21 points, connecting on four three-pointers.

The Aggies broke a six-game losing streak in the series, securing their first win over NSU since the 2010-11 season.

Norfolk State is back in action on Saturday at South Carolina State.  The Aggies will be in Princess Anne this weekend taking on Maryland Eastern Shore.