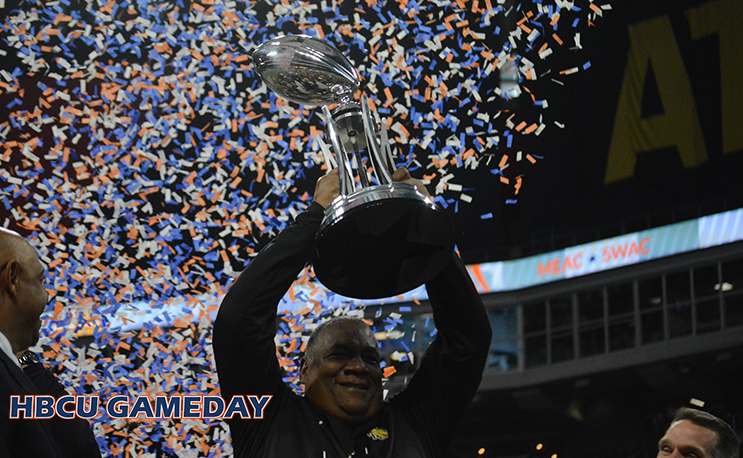 North Carolina A&T football will celebrate its historic season often No word on whether it will release an album.

North Carolina A&T shook up the HBCU football world with a big announcement earlier this week when Rod Broadway stepped down and Sam Washington took over as head coach. Now that the change has been made, the program is ready to celebrate.

A&T has announced it will show off its Celebration Bowl trophy five times during the month of January in what has been dubbed a “Victory Tour.”

The Aggies will kick things off on Jan. 15 when they serve as grand marshalls at Greensboro’s MLK Day Parade. They will follow that up the next day as the team will be presented with a resolution recognizing its 12-0 season and its accomplishments.

The Aggies will conclude the week in Raleigh on the 19th as they will be recognized by North Carolina Governor Roy Cooper at the Governor’s Mansion in an invitation-only event. (Don’t forget, they were also recognized on the floor of the U.S. House last month.)

Showing off in front of NCCU

The tour will cool off for a while only to pick back up when A&T’s arch-rival North Carolina Central arrives at Corbett Sports Arena for a game of basketball. The team will be honored at halftime of the rivalry game after NCCU paraded their third-consecutive MEAC title in front of A&T in Durham during a game last year.

And finally, the team will finish up the tour in Corbett a few days later with a Celebration Pep Rally.

No word on whether there will be a tour, and we don’t think Don King will be promoting the tour. A perfect season doesn’t come around every year, so it only makes sense to celebrate it as much as possible.