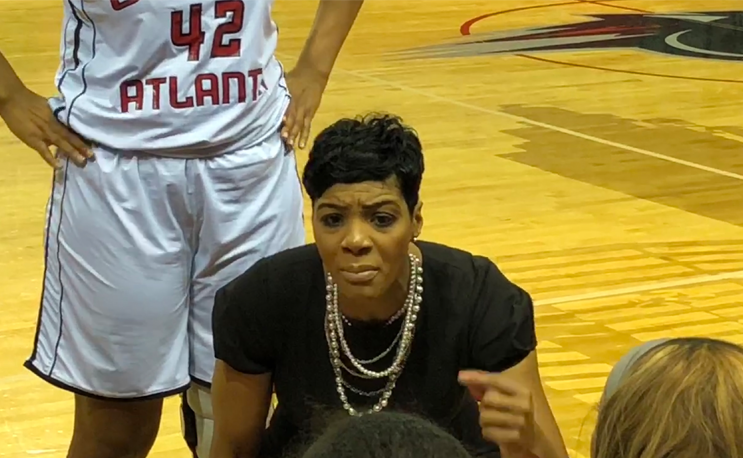 Panthers surging with Yolanda Moore at the helm.

Clark Atlanta hasn’t had a winning basketball season for its women’s team since the 2013-14 season.  This year, however, the ladies are doing more thanks to Yolanda Moore. The former WNBA champion currently has the Lady Panthers atop the SIAC East with a 7-1 record.  Culture shifts aren’t easy but nothing in Moore’s life has ever really been easy.

“That’s how I grew up, I didn’t know anything but hard work. I didn’t know impossible. Growing up in Mississippi, halfway living on the farm and basketball being your only option. If I was going to have a chance at a better life as an adult than I had growing up, then basketball was going to be the way. I had to be the best,” said Moore.

Quick history lesson.  Moore was overlooked in the WNBA draft after a stellar career at Ole Miss dropping 1,485 career points on the competition. She had to try out for the Houston Comets in 1997 after two knee surgeries and giving birth to her youngest daughter.  She worked with a trainer to drop 50 pounds, survived a training camp from hell and went on to become a championship contributor for the Comets.

“They didn’t think I would be ready to play. I needed to prove to them I was no matter how emotionally or psychologically draining it was. It was all or nothing,” Moore told the Orlando Sun-Sentinel back in 2000.

She is now teaching that odds-defying work ethic to her players, who have the same big dreams Moore once had 25 years ago. It’s not osmosis though, these young ladies have to see it within themselves.

CAU is currently 9-6 and three of its losses were by four points or less. A year ago at this time, the team was 5-9 so the data suggests there has been an impact. The tangibility of the impact can be debated but there’s a case to be made for pride. Moore has taught her team to take pride in the effort they give on the court and the unique opportunity of being a student-athlete.

“What does it really mean to you to be able to play this game and to be able to wear that Clark Atlanta University uniform when there are so many other kids in your situation who are just as talented if not more talented. But for whatever reason, they didn’t get the opportunity to play college basketball like you did. You don’t take these opportunities for granted, you play every single day like it’s your last.”

“Winning means something. It feels good when you win. You get a different level of respect. Once you start you don’t want to stop.”

A four-point win over Central State has been the signature win for CAU thus far this season.  The Lady Marauders are coming off an appearance in the SIAC Championship game last season and currently, have the best record in the league at 12-3.

CAU has been a bit banged up lately with injuries and Moore is hoping to get back to full strength soon.  Time is quickly wrapping up on the regular season, however, only ten more games until tournament time. Moore’s biggest wish is that her team can master the simplicity of the game.

“There are still a lot of things that we need to work on as a team. I’m hoping that when it comes to tournament time that the light bulb will come on. All the things, the basic fundamentals of the game, is something that we work on every single day, I’m just waiting for that to come on, waiting for that light bulb to click and they get it.”

So far they’ve been getting something and it has shown on the court.

If you would like to hear our entire conversation with Yolanda Moore then you can listen to it here on Soundcloud.