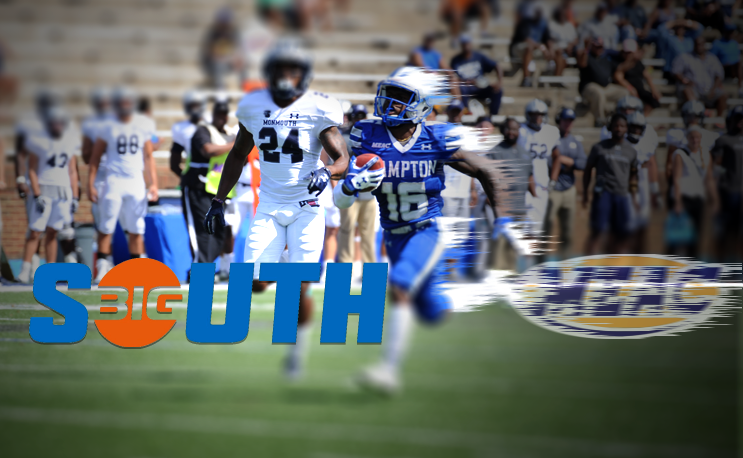 The Pirates move out of the HBCU conference that’s been home the last 22 years.

Hampton University made it official on Thursday, it is leaving the MEAC to join the Big South Conference.  Hampton’s membership begins July 1, 2018 and increases the Big South membership to 12 next fall with the addition of USC Upstate yesterday.  The news was first reported and confirmed last night by our Steven J. Gaither.

Kyle Kallander, the Commissioner of the Big South, sat beside Eugene Marshall, Jr., Hampton’s Athletic Director, and formally welcomed the Pirates to its new home.

Marshall answered questions during the presser with the most obvious one being will the traditional rivalries within the MEAC continue?  Marshall said it was Hampton’s intent to do so although it wasn’t something that he could fully guarantee.

“We are very, very thankful to the MEAC for 22 years of great fellowship, competition, and tremendous support.  We hope to continue the relationship with our MEAC members so that we can continue to enhance our long-standing rivalries, and keep the fellowship and kinship going,” said Marshall.

When asked how long the process of joining the Big South had been underway, Marshall said that he began conversations with Kallander from the very beginning of his arrival at Hampton three and a half years ago.

Another big question was when would the Pirates begin playing a Big South football schedule.  Both Marshall and Kallander suggested they would like for Hampton to begin play next year, and didn’t rule it out completely, but they both felt like 2019 would most likely be the start date.  Part of those considerations centered around being considerate to other MEAC schools having enough time to reschedule around Hampton’s absence.

Hampton joined the MEAC in 1995 after moving up to Division I and leaving the CIAA, which it helped start in 1912. The MEAC currently includes 13 HBCUs from Delaware to Florida but will lose Savannah State in 2019 as it returns to Division II. Only 11 of the current schools play football (Maryland-Eastern Shore and Coppin do not). The school reportedly flirted with jumping to the Colonial Athletic Association (CAA) in 2012, but didn’t jump ship.

It’s been a busy week for the Big South Conference who announced on Wednesday that it was adding USC-Upstate, a non-football school, to the conference. The addition of Hampton brings another football school to the fold for the Big South, a move that would help offset Liberty University’s plans to leave for FBS play starting in 2019.  It’s not just Hampton, Campbell University begins play in the Big South in 2018 and North Alabama joins the schedule in 2019. Minus Liberty, the Big South currently has five football programs; Kennesaw State, Monmouth, Charleston Southern, Presbyterian, and Gardner-Webb.  Football aside, the Big South currently has ten members from Virginia to South Carolina, Hampton and USC-Upstate will bring that number to twelve.

Rare company for the Pirates

Hampton now joins Tennessee State as the only HBCUs in Division I not in the MEAC or SWAC. Losing Hampton will put the MEAC membership at 11 once both it and SSU leaves, and just nine football playing schools.  This move will undoubtedly have a ripple effect across the college football landscape, particulary with HBCUs.  Steven J. Gaither and I discuss what all of this now means in a special edition Podcast.