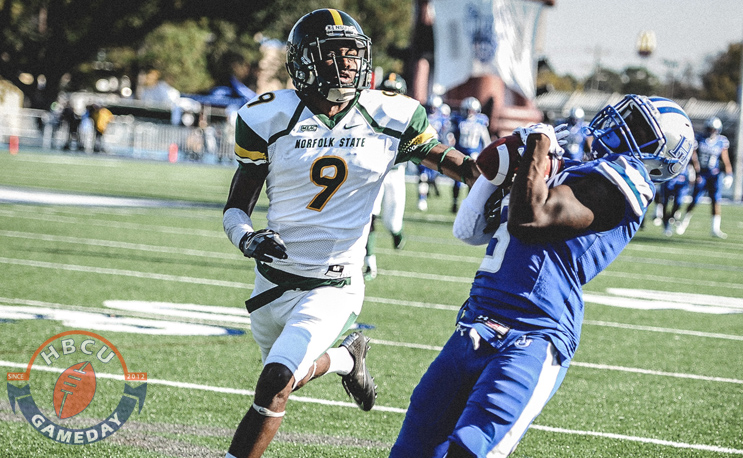 Norfolk State left to ponder its future in the wake of Hampton bolting the MEAC in favor of the Big South conference.

Now that Hampton has made waves in the proverbial HBCU waters will Norfolk State?

Hampton announced on Thursday that it will be moving to the Big South as a full member starting in 2018. This was first reported by HBCU Gameday on Wednesday night.

Although it is the decision of one school’s athletic department, Hampton’s newly announced move away from the MEAC will likely affect several other schools. Chiefly among them, its closest neighbor, NSU.

Norfolk State and Hampton joined at the hip

NSU AD Marty Miller says he hasn’t time to properly assess what his school’s nearby rival moving to another conference means on its end. The Big South will have seven football schools when Hampton and North Alabama join, meaning HIU will likely play several HBCUs in out-of-conference competition.

“I’m hoping we would still be able to compete against each other,” he told the Virginian-Pilot. “It will have some effect” on the MEAC basketball tournament, he added. “It helped the tournament to have Norfolk State and Hampton both in the region.”

Back To Its Roots?

Norfolk State followed Hampton to the MEAC in the mid-1990s after both rivals built their programs in the CIAA. Located close to each other in Virginia’s historic Tidewater Area, the two programs have a rivalry called “The Battle of The Bay” that is one of the most popular in all of HBCU sports.

Despite a tightening budget and now, Hampton’s move, Miller says NSU won’t be moving back to its former league.

“Not in my opinion. I haven’t given it any thought.”

NSU’s biggest rival outside of Hampton is Virginia State, a CIAA power that many people think could make a move to Division I. That move would most likely be towards the MEAC. However, it would be a big blow to the oldest HBCU conference as it has already lost three schools (Hampton, NSU and NCCU) to the MEAC in the last 25 years and nearly lost a fourth in Winston-Salem State.