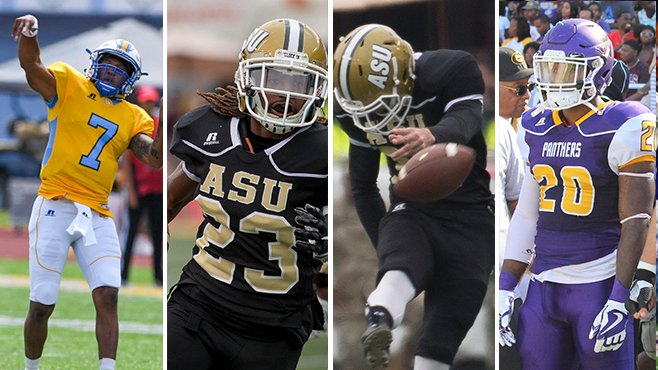 Football Players of the Week: Week 9

Howard completed 22-of-32 passes for 338 yards and five touchdowns in a 47-40 win against Arkansas-Pine Bluff.

Scott was named the Defensive MVP of the Magic City Classic after scoring his second defensive touchdown of the season. The senior picked off an Alabama A&M pass on their first offensive drive and ran it back 59 yards to give Alabama State an early 7-0 lead. He also finished the game with a pass breakup, before leaving in the third. Alabama State won 21-16.

Vincent averaged 40.4 yards per punt against Alabama A&M on seven punts, and in windy conditions. He ended the day with a long of 48 and had three punts land inside the 20. He also only allowed one return (of two yards) on the punts.  Alabama State won 21-16.

Stubbs made six tackles, 1.0 sacks and 1.0 tackles for loss in leading the Panthers in tackles for the fourth time this season as Prairie View A&M defeated Bacone College 34-17.